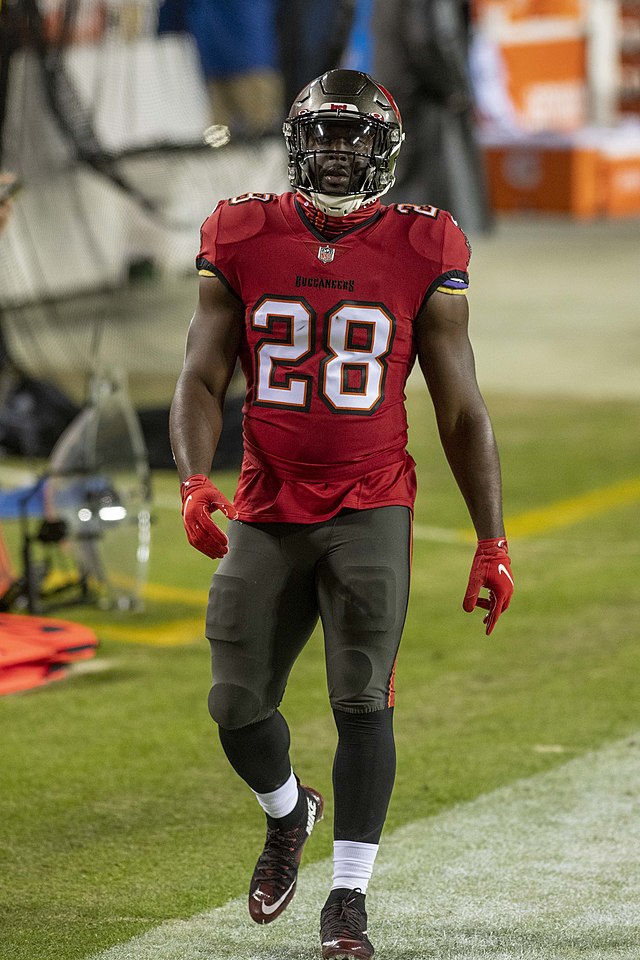 The Tampa Bay Buccaneers can’t rely on Tom Brady to carry the team on its shoulders in 2022 – as they need a potent rushing attack displayed in their offense. The Bucs don’t have R-Jo (who left for Kansas City this off-season), but they still carry Leonard Fournette, the 2022-third round pick Rachaad White, Ke’Shawn Vaughn, and Giovani Bernard. The lead horse is unequivocally Playoff Lenny (and he ousted a strong 812 rushing yds and 8 rushing TDs in 14 contests a season ago). He garnered a fine 73.9 grade by PFF in 2021. It was certainly wise for the Brady bunch to bring back Fournette on a three-year deal worth $21 million dollars.

Fournette is definitely the bowling ball RB, while Rachaad White can be the pass-catching threat from the RB spot. Besides rushing for 1,000 yds and 15 TDs last season, White recorded 456 yds receiving yards. As noted by The Sun Devils, he was the second-highest-graded player in the Pac 12 & the second-highest graded RB in the FBS. Greg Auman of The Athletic reported that White stood out during the first week of camp with size and sure hands. White is technically competing with Vaughn for the RB2 ticket, but It’s safe to say that White is primed to be the Bucs RB2 at this moment.

Vaughn (third-round pick in the 2020 draft) ran for 180 yds (with 5.0 YPC) and 2 TDs in 2021. He proved his worth in the back-end of the 2021 season with his best outing against the Philadelphia Eagles: 7 rushing attempts, 70 rushing yds, and 1 rushing TD. He may be slightly overshadowed by White, but he is still a superb RB3. The last Bucs RB is none other than Giovani Bernard. He might be a bit more washed than his 45-year-old QB, but he should make the roster and find a way to be involved in moments of the 2022 season. The former Bengals RB garnered 123 receiving yds and 3 receiving TDs last season.

The Bucs will most likely not rank in the Top 15 of rushing yds in the upcoming season, but they can absolutely be efficient and deadly in the right moments (such as against the Saints stingy run defense and in playoff match-ups) w/ their bruising RB1 and the rook from Arizona State. I believe the Bucs rushing attack will make their fans feel comfortable about its ability in the post-Brady era (hence, when the Bucs aren’t comfortably leading the league in passing attempts).