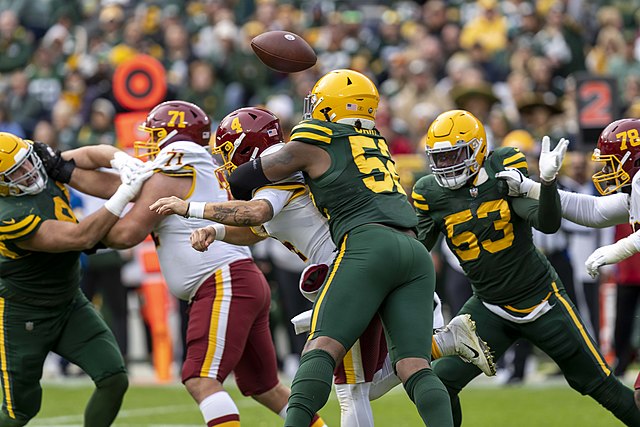 Expect the Packers pass rush to dominate in 2022

The Green Bay Packers Nicholas Cage-like quarterback in Aaron Rodgers somewhat hogs the spotlight of the Packers pass-rushing abilities. The Packers edge rusher Rashan Gary, who is coming off a 9.5 sack season (and obtaining an unearthly 89.3 grade by PFF), has really blossomed this off-season. Per The Athletic, Matt LaFleur stated, “He’s got the capability of wrecking practice. He probably would have four sacks (Thursday). He’s just relentless. He plays with a great motor and energy, and I think it rubs off on everybody. He makes everybody around him better.” There isn’t any reason that Gary should set his sights on breaking Clay Matthew’s career-best single-season sack figure (13.5) in the upcoming season.

The other Packers pass-rushing menace, Preston Smith, registered nine sacks and an 80.8 grade by PFF last season (after a mediocre 2020 campaign), and inked an impressive four-year contract worth $52 million dollars. The 29-year-old pass rusher and Gary are unequivocally one of the league’s top pass-rushing tandems.

The 2022 fifth-round pick Kingsley Enagbare could be an impact player in his first season, too. He has fine size (6’4, 260 Ibs) and strength, so he shouldn’t get bullied by OTs. He also has a knack for forcing turnovers (3 FFs in 2020). As expected, the Packers should even garner pass-rushing help from Kenny Clark — as he ousted four sacks and 13 QB hits in 2021. PFF also gave him a 74.9 grade for his efforts last season. He may not be a high sack machine, but he is a maniac that requires double-teams and he should help his teammates excel in one on one match-ups.

The Pack didn’t only bring back a key pass rusher in free agency, but they also signed the fearless IDL Jarran Reed to a one-year deal worth $7 million dollars. The 2016 second-round pick ousted 10.5 sacks in 2018 and 6.5 sacks. I believe he’s one of the biggest x-factors on the Packers and his versatility will be vital against the likes of the Los Angeles Rams and Tampa Bay Buccaneers.

The Packers ranked 16th in sacks a season ago. I absolutely foresee them cracking a Top-10 finish in sacks next season with an improved Gary (who is really pushing for an AP spot), the new face in Reed, and the young gun: Enagbare. I expect the former Michigan Wolverine to lead his posse and unveil to be the next special Packers QB hunter.