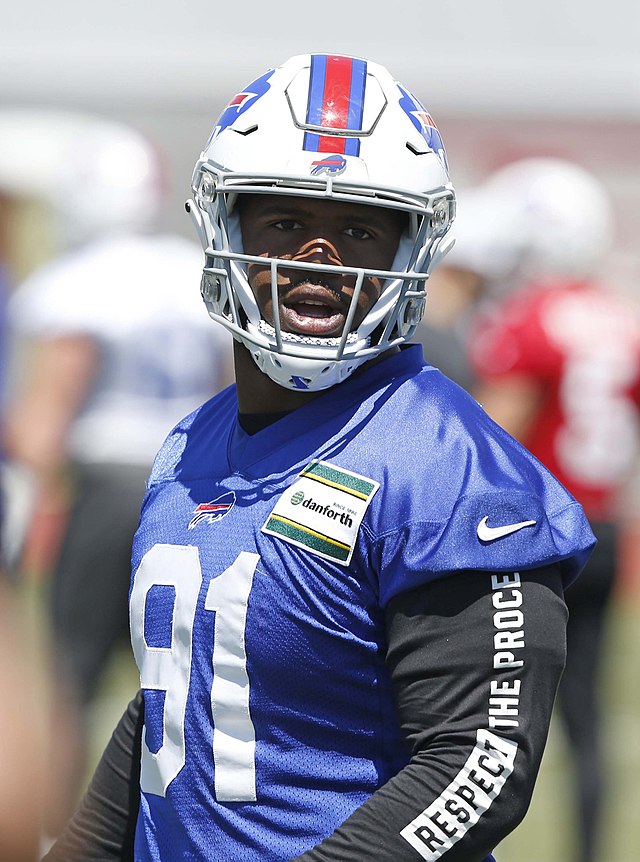 The Bills pass rush will shine in 2022

The Buffalo Bills have a Madden-like signal-caller in Josh Allen – who has thrown 73 passing touchdowns in the past two seasons combined. Well, the Bills GM Brandon Beane really sculpted the Bills pass rush to match the talent of the Bills passing attack this off-season. The Bills brought in the mythical Von Miller, also known as Cam Newton’s archnemesis, to be a wrecking ball in 2022. Per NFL Network, Miller stated, “I felt like I was the missing piece.” Miller is being taken care of by the Bills w/ his six-year deal worth $120 million, but he definitely feels like the Bills are a team that he can win a SB ring with for his second straight season.

Miller has also jelled in as a Buffalo Bill off the field (as shown below).

Miller will seek to hunt opposing signal-callers across from the second-year EDGE profile, Gregory Rousseau. Rousseau will not only feel delighted that Miller will hog the attention, but he should feel more confident in himself developing his pass-rushing kit this off-season. The 22-year-old DE shouldn’t panic that he only ousted four sacks in his rookie campaign. The 2016 DPOY winner, Khalil Mack, only mustered out a mere four sacks in his rookie season. I surely believe the more mature 2021 Bills first-round pick is the Bills x-factor in 2022.

The shaky Shaq Lawson needs to bounce back after getting back with his ex-team. Lawson only unveiled a mere one sack as a Jet in 2021. He signed a one-year prove-it deal with the Bills this off-season. I expect Lawson to have a ton of motivation and opportunities in the upcoming season. Lawson and Rousseau are pegged as the starting edge players, but they will also anticipate magic from DT Ed Oliver. The former 2019 Draft Pick has slightly disappointed (7 sacks in the past two seasons combined).

The Bills pass rush could significantly w/ Miller, progress from their 2021 first-round pick, and a jolt out of their 2019 first-round pick. I like the chances of Oliver having more success, but I believe Gregory is more likely to oust 10+ sacks in 2022. The Bills ranked 12th in sacks in 2021 and I undoubtedly foresee them ranking Top-5 in sacks next season. Furthermore, they should make life a lot more miserable for Patrick Mahomes in their upcoming match-up than their previous show-down. It will be hard to diagnose if the Bills are having more offensive fireworks or pass-rushing prowess in the remainder of the offseason.