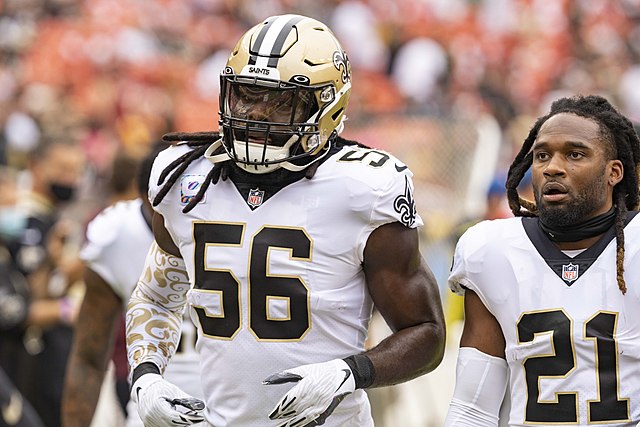 Will Demario Davis make it into Canton?

The menacing linebacker Demario Davis has unequivocally been one of the best value-free agent signings in the past decade. The Saints brought in Davis in the 2018 off-season and he really blossomed into a grim reaper-like defender in 2018 and beyond. Davis was a Pro Bowl snub in 2018, First-Team All-Pro in 2019 (with an utterly impressive 90.1 grade by PFF), Second-Team All-Pro in 2020, and Second-Team All-Pro in 2021. With that stated, there is serious reason to believe that the Saints LB that is striving for his fourth straight AP could wind up in Canton and sincerely be one of the best late bloomers in NFL history.

If Davis retired today, I don’t believe he should be cast into Canton. However, if he adds three more, second-team (or first-team) All-Pro seasons, he will certainly have a HOF-worthy. If he adds two more AP seasons w/ a Super Bowl ring, I’d expect to see him wear a gold jacket in the future. The HOF LB and Chicago Bears legend Brian Urlacher has four All-Pro nods. Davis is certainly still playing at a high level – as he registered 105 tackles, 3 sacks, 10 QB hits, 13 TFLs, and 7 pass deflections in 2021. It needs to also be noted that he’s only missed one game in his career. The Saints defensive captain is under contract with Who Dat Nation until the 2025 off-season.

The other Saints defensive captain Cameron Jordan is striving to also make the HOF. He is coming off an impressive 12.5 sack season w/ Pro Bowl honors at the age of 32.

If Davis or Jordan can’t finish with a HOF-caliber career, it seems likely that both defenders will find themselves in the Saints ring of honor.