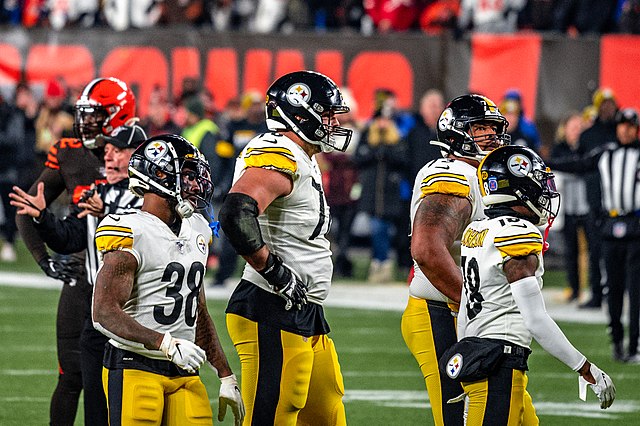 The Pittsburgh Steelers don’t have one offensive lineman that deserves to throw a stone in 2022. The Steelers OL was recently dubbed as the 30th best OL by PFF. The Steelers OL consists of LT Dan Moore Jr, LG Kevin Dotson, C Mason Cole, RG James Daniels, and RT Chukwuma Okorafor. Moore Jr. was a modest blind-side LT for a 23-year-old last season – as he garnered a 57.8 grade by PFF (while allowing several sacks). It will be vital that he can improve in his sophomore season for the likely starting, somewhat shaky QB Mitchell Trubisky. It should be noted that the former Steelers OG Ramon Foster feels optimistic about the young LT. Per Heavy., Foster stated, “I’m excited for him. He is able to get in space, which gives him high lights. He finishes well. His technique has been good, too, and his knowledge of the game will just continue to evolve the more and more he plays.

Dotson had a somewhat admirable rookie campaign with a clear display of pass-blocking talent (with zero sacks allowed), but he sadly took a step back in his sophomore season – as he allowed 3 sacks and had a PFF grade of 64.5 in nine games. He has regressed (to say the least), but he is still a young OL.

The center Mason Cole is a steady veteran that was scooped up from the NFL club in the Twin Cities this off-season. Cole notched a 69.7 grade by PFF in 2021 – with only two sacks allowed & 0 penalties enforced. The 26-year-old inked a three-year deal worth $15.75 million dollars with the Steelers.

The Steelers should feel quite confident in the RG James Daniels – as he garnered a 71.8 grade by PFF in 2021. His new teammate, Cole, recently spoke very positively about Daniels. Per Pittsburgh Post-Gazette, Cole stated, “James is awesome, man. He’s going to be really good for our camp. He’s fun to be around. He’s never complaining, always working hard. He’s here to go to work, and he’s here to have a good time, too, which is fun.” It’s widely enunciated that Daniels is talented and passionate.

The Steelers RT, Chukwuma Okorafor, had his ups and downs in 2021: He had a whopping 11 penalties, but he helped his rookie RB Najee Harris rush for He garnered 1,200 yds and 7 TDs. His crucial involvement in the Steelers ground attack is why the Steelers brought him back on a three-year deal worth $29.5 million dollars.

It’s easy to say the Steelers OL isn’t sexy or near the same caliber of previous Steelers OLs in the Mike Tomlin era (which are both accurate statements). Although, it should be noted that the Steelers OL is quite young – as Mason Cole is the only starter over the age of 25 (and he’s 26). The Steelers will have growing pains, but they could certainly ascend into a potent OL unit in the future.