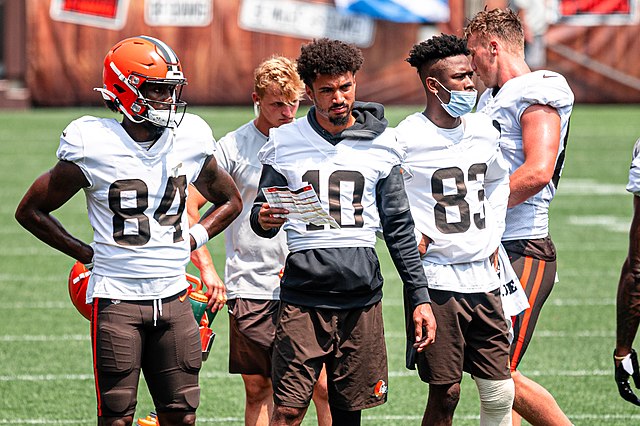 Latest takeaways from the Browns 24-13 victory

The Cleveland Browns beat the Jacksonville Jaguars 24 – 13 on Friday, August 12th and there were a number of important takeaways from the game, some good, and some bad. Let’s have a closer look at some of the key analyses.

Deshaun Watson made his Browns debut and looked rusty. This is no great surprise when you consider that his last competitive game was against the Tennessee Titans in Week 17 2020/21 where he threw for 365 yards and 3 touchdowns in a 41-38 loss. Watson threw the ball 5 times with 1 completion for 7 yards, but Anthony Schwartz dropped three of these passes. The Browns have been clear that Jacoby Brissett is getting most of the first team reps in practice so it’s unsurprising that we saw him for such a short period in the game. The good news is his pocket presence looked good and he looked dangerous when scrambling – which is something the Browns lacked with Baker Mayfield. Once he’s back up to game speed Watson is going to be an excellent weapon in the Browns Offense.

Unfortunately, Centre Nick Harris suffered an ACL injury to his right knee. Nick had put on weight but kept his mobility and the Browns were hopeful he was going to have a good season. The way he was driven back wasn’t a good omen and now he’s going to have surgery on his knee and will be out for the season. Fortunately, the Browns brought in Ethan Pocic in Free Agency and his backup is Dawson Deaton. Deaton played Guard for Texas Tech and was the Browns 7th Round pick in the 2022 Draft going at number 246. This means he isn’t a starting caliber Centre.  Will the Browns move to bring back JC Tretter? I doubt it as they cut him from their roster, but Billy Price is still available in Free Agency so I wouldn’t be surprised if a move was made for him.

I’ve mentioned already that Anthony Schwartz had a poor game. He didn’t register any yardage on Friday with multiple drops. Trying to look on the positive side, at least he got into positions to make catches which is more than he achieved in his rookie year in 2021. The Browns Wide Receiver Room remains a concern for me. Amari Cooper, Donovan Peoples-Jones, and David Bell didn’t play and have had a good Training Camp so far, but there is little to excite outside of those three. Michael Woods II was having a good Camp but pulled his hamstring and Javon Wims is now in his 4th season, so if he was going to have an impact you would think he’d have made it by now. Personally, I’d really like to see the Browns move for Will Fuller who is still available in Free Agency.

The Browns Cornerback Room has to be one of the deepest, if not the deepest, in the NFL- Denzel Ward, Greg Newsome II, Greedy Williams, AJ Green, and now Martin Emerson.  Emerson looked in total control all night and capped off a superb performance with a Pick 6 going 74 yards at the end of the first half to put the Browns in the lead. The only battle is going to be for the CB6 slot, but Herb Miller also looked good with a fine interception, and he is a 2-year veteran so he understands the game more and is learning from outstanding players.

The Browns love their Running Backs and Jerome Ford was motoring against the Jaguars. He had 10 carries for 57 yards, 5.7 yards per carry, and a rushing touchdown. In addition, he had 4 receptions for 45 yards, with an average of 11.2 yards per reception, and a receiving touchdown. Ford was selected by the Browns in Round 5 of the 2022 Draft with pick 156 and with this performance, and the Browns need at Wide Receiver, it could be that Kareem Hunt is traded to a team that is short of an RB1. With Nick Chubb, D’Ernest Johnson, Demetric Felton, and now Jerome Ford the Browns are loaded at Running Back, with an honorable mention to John Kelly.

So, the Browns move on to a home game next week against the Philadelphia Eagles where we should begin to see more of their starters playing. However, don’t expect to see Jacoby Brissett on the pitch for long as the QB battle between Joshua Dobbs and Josh Rosen is a fascinating one from the evidence of Friday’s game. Dobbs completed 10 of 13 attempts for 108 yards and a touchdown whereas Rosen went 6 of 7 for 56 yards. It would appear that the Browns have much better depth at QB this season than last year where Case Keenum wasn’t even given the opportunity to start despite Baker’s horrendous injuries. As for all teams let’s hope there are no more serious injuries.