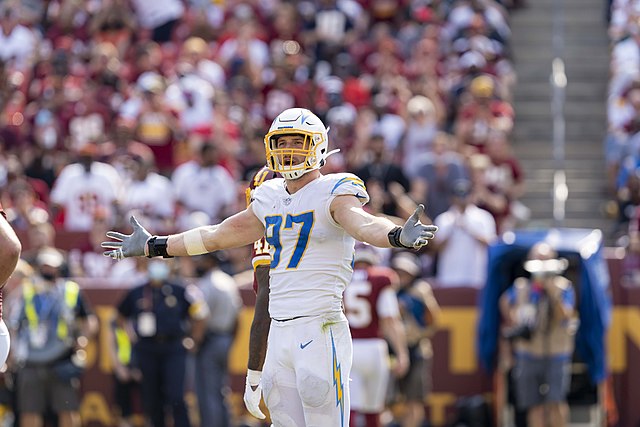 Expect the Chargers pass rush to thrive in 2022

Bosa’s new roommate (well, maybe), Khalil Mack, will be licking his chops to have a double-digit campaign next season, too. Mack registered six sacks, 7 QB hits, and six tackles for loss in seven contests last season. It was clear that Mack didn’t lose a step last season and it’s clear that he’s unleashed hell this off-season, as well. Take a look yourself at the scene of Mack looking like the Incredible Hulk below.

Besides the Chargers top two pass rushers, LA will anticipate production from Kyle Van Noy, Jerry Tillery (4.5 sacks last season), and Sebastian Joseph-Day (3 sacks in 2021). In particular, Noy is a quality third-string OLB and he will often be a fresh, pass-rushing menace in the upcoming season. He unveiled five sacks, two forced fumbles, and one interception last season. PFF also gave him a quality 72.9 grade for his 2021 season.

The Chargers ranked 20th in sacks a season ago (with 35 sacks). It would be an understatement to say I expect them to significantly improve with the former Buffalo edge rusher that witnessed Jadeveon Clowney get drafted ahead of him. The Chargers have an MVP-darkhorse QB with Herbert but don’t forget about their tenacious pass rush that will make life miserable for Patrick Mahomes and the rest of the league in 2022.