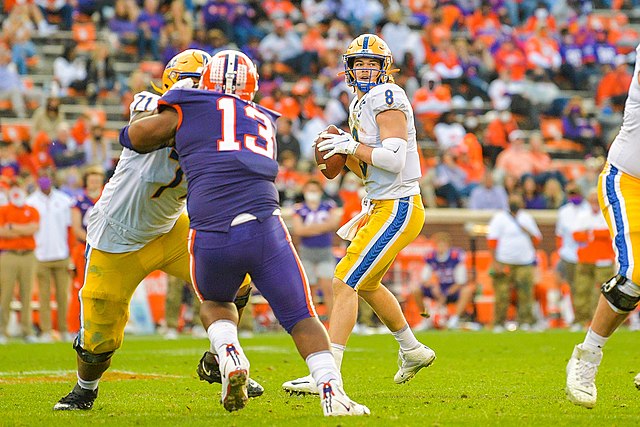 The Pittsburgh Steelers quarterback Kenny Pickett has turned heads this off-season and it’s clear that Mike Tomlin will have a difficult choice in picking his starting quarterback. After Pickett edged out Mason Rudolph for second-string reps in training camp, the former Pitt signal-caller had a dose of first-team reps five days ago. Mitchell Trubisky, also known to the world as the QB that was drafted ahead of Patrick Mahomes, is penciled in as the starter. Nonetheless, things could change at the QB1 spot for Pittsburgh soon. With that stated, I’m going to untwine three reasons why Pickett could start.

The Steelers rookie QB Kenny Pickett has certainly been a stud this pre-season. As PFF nicely noted this morning, Pickett has completed 19 of 22 passing attempts, thrown for 171 yds, unleashed 3 passing touchdowns to 0 interceptions, and unveiled an impressive 138.6 passer rating. Pickett isn’t only making impressive darts to his pass-catching weapons, but he is also taking care of the football (which has been a flaw in Trubisky’s game).

Trubisky has only thrown 15 passing attempts in pre-season action. However, Pickett can hang his hat on being more productive than Rudolph’s production in August — as he carries a 106.3 passer rating (which includes 220 passing yds, 2 passing TDs, and 0 ints).

I believe that Trubisky is underrated, but I don’t think his ceiling is more impressive than Pickett’s (especially after Pickett’s off-season work) potential. They both share fine mobility, but Pickett has a bit better arm strength than Trubisky. He could really convert big-time throws in clutch moments – despite the pass rush and glue-like secondary.

The Steelers young QB can really learn the game of professional football by getting his feet wet and playing in his rookie season. He can absolutely develop his game throughout the season and potentially be a Pro Bowl-caliber QB in December. It’s also vital to get the 2022 first-round pick involved with the WR group that hasn’t broken apart yet – as Pickett could really shine with the toys.