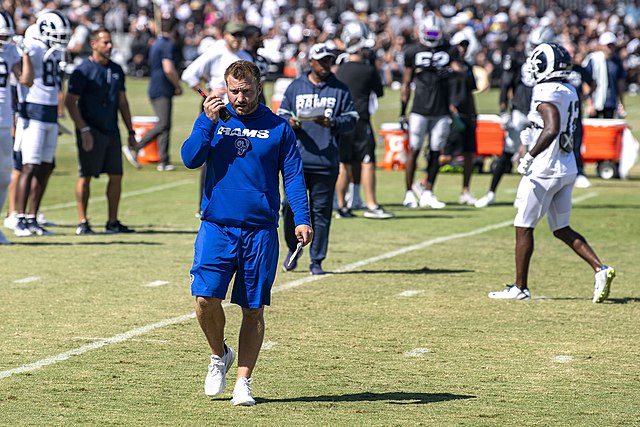 Will Sean McVay be cast into Canton?

Sean McVay is fresh off a Super Bowl win at the helm of the Los Angeles Rams and aims to have them back in the mix of championship contention again in the 2022 season. At 36, he’s an extremely young NFL head coach and was the youngest head coach in the modern history of the league when he was hired by the Rams in 2017. Some have pointed to his youth and spunk as one of the ultimate strengths of the current Rams franchise.

Is the youngest head coach in NFL history to win a Super Bowl a Hall of Famer? When you consider the fact that he’s been to two Super Bowls already is his very young coaching career, it seems as though he’s surely headed in that direction. Or does this actually reflect a mere moment in time that tells us very little about what McVay’s career may turn out to be? With a career this young, it’s obvious time is the only thing that will tell.

When McVay became the youngest head coach in NFL history to win the Super Bowl, he didn’t set that mark by long. Mike Tomlin was also just 36 years old when his Pittsburgh Steelers won Super Bowl XLIII with last-second heroics over the Arizona Cardinals. Tomlin was a mere ten months older than McVay. Before Tomlin, Jon Gruden was the youngest head coach to win a Super Bowl at 39 when his Tampa Bay Buccaneers beat up the Oakland Raiders in Super Bowl XXXVII.

Let’s look at their careers respectively. McVay, Tomlin, and Gruden each won a Super Bowl in their first five seasons as a head coach.

Now, just to make it clear, Gruden is not a Hall of Famer. His Tampa Bay Super Bowl team was essentially Tony Dungy’s team which he just happened to be in the right place for. On the other hand, McVay and Tomlin without question created the culture with which their respective Super Bowl teams were molded by. Tomlin, who likely is a future Hall of Famer, won his Super Bowl in just his second season at the helm.

Tomlin’s Hall of Fame credentials extend even beyond that. Like McVay, he took his team to two Super Bowls in his first five seasons as head coach. But what we don’t know yet about McVay’s career is whether he will continue to sustain a winning culture long into his career. In 15 years now as the coach of the Steelers, Tomlin’s teams have never finished a season under .500. He’s also reached the mark of 150 regular season wins.

McVay is just over a third of the way to 150 at this point, although his team features to be right in the mix for the Super Bowl contention again in 2022. If his career was finished today, it’s difficult to say he’s a Hall of Famer. It isn’t that he isn’t on the right trajectory—he certainly is—it’s just that there isn’t enough career to make a full determination yet. If the culture he’s built in Los Angeles over the last five years proves to be sustainable over the long haul, surely we’ll have a better answer.