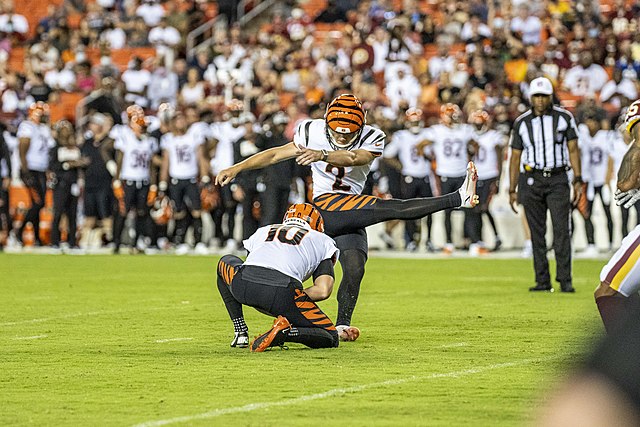 Will the Bengals repeat their success?

The Cincinnati Bengals defied all the odds last season and reached their first Super Bowl in 33 years (which they only narrowly lost to the LA Rams 23-20). They topped the AFC with a 27-24 OT win over the Kansas City Chiefs in Kansas City and wrapped up the AFC North Division Title with a 10-7 record. Ja’Marr Chase amassed 175 points, Joe Burrow 153 points, Joe Mixon 150 points, and Tee Higgins 125 points. The next best receiver was tight end C.J. Uzomah with 93 points. It was an outstanding year, but I don’t think it will be repeated. Here’s why:

The Bengals played last season with the fourth-placed schedule in the AFC North. They only played five Playoff teams in their 17 games- the Packers, the Raiders, the Chargers, the Niners, and the Chiefs and they lost three of these games.

In 2022, they have the third most demanding schedule. Aside from the Ravens and Browns in the AFC North, both of whom were injury-ravaged all last season, and the Steelers (who won’t be a pushover despite moving on from Roethlisberger), the Bengals have to play the Cowboys, Saints, Titans, Chiefs, Buccaneers, and the Bills, with honorable mention to the Dolphins (added Tyreek Hill),  and Patriots. If they somehow manage to still make it to the Playoffs we can probably count the Chargers to that list who added Khalil Mack. Last season they won three regular season games by 3 points or less which ultimately made the difference between winning the AFC North and enabling them to go on their postseason run. I don’t think they will be so fortunate this coming season.

As already mentioned the Bengals relied on a small handful of players for most of their points. Burrow and Chase is a deadly combination, but if Chase was to go down injured, what depth do the Bengals have at wide receiver after Higgins and Boyd? Have you ever heard of Mike Thomas, Stanley Morgan, Trent Taylor? The Bengals have these listed as their second wide receivers. Oh, and tight end C.J. Uzomah has left the Bengals.

For a Super Bowl-losing team the Bengals don’t have much depth, and to be fair, they didn’t last season either, but last season they were remarkably injury-free. Of the 32 NFL teams, the Bengals had the 9th healthiest roster and the fourth healthiest in the AFC. They’re unlikely to be as fortunate this coming season.

No wonder the Bengals faithful gave him a huge reception when he came on in their preseason friendly loss to the Cardinals, where he didn’t miss a kick, including a 58-yard bomb. As good as he is, 5 walk-off wins are unlikely this upcoming season.

My prediction is the AFC North is likely to be won by the Baltimore Ravens unless Jacoby Brissett performs a lot better than expected for the Cleveland Browns. If the Browns are still in contention by game 12, and the return of Deshaun Watson, there might yet be a late twist in the AFC North Division race.