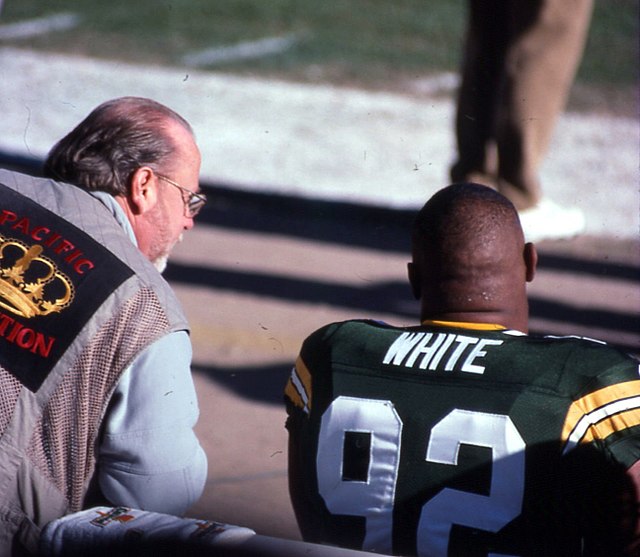 Who is the best pass rusher of all time?

Unearthly quarterbacks highlight the NFL, but let’s not forget about the presence of the pass rushers that prey on sacking opposing quarterbacks. There have undoubtedly been illustrious QB hunters in the history of the NFL. The top pass rusher of all time is unequivocally Lawrence Taylor. LT showed an impressive amount of controlled rage in his rookie season – as he won Defensive Rookie of The Year & Defensive Player of The Year. Taylor would then win DPOY in his sophomore season and even proceed to win NFL MVP in 1986. In fact, Taylor is the last defender to win MVP.

With that enunciated, I’m going to untwine the next best nine-pass rushers of all time.

Reggie White, also known as J.J. Watt before J.J. Watt, was a freak of nature for the Philadelphia Eagles. White registered three 18+ sack seasons in his first four years as a pro. Yes, you read that correctly. Furthermore, he garnered 21 sacks in 12 games in 1987 – which is obviously the most sacks ever by a defender in a 12-game span. He garnered eight first-team All-Pro nods in his career. He also won DPOY twice in his NFL journey.

The greek god-like defender, Deacon Jones, started his journey all the way back in the 60s. Nonetheless, he still mopped the floor against opposing QBs. He unveiled four seasons of 19+ sacks in his Rams tenure. He obtained 173.5 sacks in his career, as well. Strangely, he never won DPOY in his HOF career.

The man with 200 sacks (the record for the most career sacks), Bruce Smith, was a gift to the Buffalo Bills from the football gods. He has the same tally of first-team All-Pro nods as White. He won DPOY in 1990 & 1996. Smith has ousted an undeniably insane 13 seasons of 10+ sacks in his career – which is also an NFL record! Smith was blatantly dominant, an athletic freak, and a beacon of consistency.

It’s hard to deny the consistent damage that Aaron Donald unleashes on opposing offensive lines. AD has been first-team All-Pro seven times in his eight-year career! Furthermore, he’s won DPOY three times! In 2018, Donald somehow unveiled 18.5 sacks and 41 QB hits, from the DT spot. He really shined in Super Bowl LVI – where he ousted two sacks (which included a sack on the Rams last play on defense). The scary part is that Donald is still seeking more vengeance in the league.

The legendary New York Giants edge rusher Michael Strahan holds the record for the most sacks in a 16-game season (with 22.5 sacks) and he won DPOY in the same season. Strahan also had a potent sack season in 2018 – where he obtained 18.5 sacks. It’s also extremely important to note that the four-time All-Pro is a Super Bowl champion. Of course, Strahan also co-hosts “Good Morning America”.

J.J. Watt is unequivocally one of the best walk-on stories in college football. Watt proved to be a workhorse and gifted pass rusher at the professional level. He played with his hair on fire in 2012 – as he picked up 20.5 sacks and won DPOY. He decided to win DPOY in 2014 and in 2015, too. Watt has been named first-team All-Pro five times in his NFL career. He’s also shown off his ability to catch touchdowns in the past.

The former Rams pass rusher Kevin Greene was an absolute maniac on the football field. After having a mere zero sacks in his first season, Greene opted to transform into a mythical pass rusher. Greene registered a 16.5 sack campaign in 1988 and another 16.5 sack season in 1989. Impressively, he boasted 10 seasons of 10+ sacks. He displayed six seasons of 13+ sacks. Greene has unveiled 160 career sacks – which is quite a feat.

Derrick Thomas sadly didn’t play for a long period of time – due to his early passing in 2000. Although, Thomas was still a nightmare pass-rusher in his lifetime, to say the least. The former Kansas City Chief knocked out a 20-sack season in 15 games as a sophomore. Thomas unleashed seven 10+ sack seasons in his 11-year career. He was quite proficient at forcing fumbles (with six FFs in 1990 and 8 FFs in 1992). In addition, he made nine straight Pro Bowls in the NFL.

Julius Peppers played for an eternity and he wreaked havoc in each phase of his career. He kicked off his career by winning DROY while playing 12 games! Peppers managed to unveil 10 seasons of 10+ sacks. He had 159.5 sacks as a whole. He has made an absolutely impressive nine Pro Bowls in his football life. Peppers truly resembles the Alien – except he might be more explosive than the extraterrestrial character.