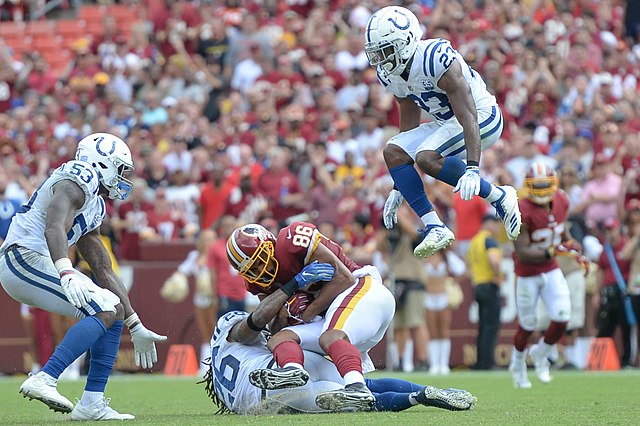 The Defensive Player of The Year winner last season was none other than T.J. Watt. The younger Watt bro clocked 22.5 sacks (which ties with Micahel Strahan for the most sacks in a single season), 21 tackles for loss, five forced fumbles, and a whopping 39 QB hits. The Steelers edge player is undoubtedly a prime DPOY candidate for his second season in a row. Aaron Donald and Myles Garrett are also heavy favorites to win DPOY.

With that said, I’m going to untwine many darkhorse DPOY candidates in the 2022 season. So, who could be the biggest overachiever on defense?

Darius Leonard is an unusually talented football player, but he competes from the good-ole OLB position (which is looked down on). Leonard unleashed an absolutely astonishing 8 forced fumbles, 8 pass deflections, 4 interceptions, and 4 tackles for loss a season ago. Leonard was first-team All-Pro in 2021 and first-team All-Pro in 2020. I expect Leonard to not register more unearthly numbers, but he should be on a team that has much more success than a season ago.

The San Francisco 49ers pass rusher Nick Bosa won DROY, sadly missed his entire sophomore season, and then registered a whopping 15.5 sacks, 21 tackles for loss, 32 QB hits, and four forced fumbles last season. Bosa earned a very potent 88.3 grade from PFF last season, too. I love Bosa’s growth over his career and there isn’t any reason he doesn’t aspire to be the next pass rusher not named AD to win DPOY.

If Marcus Davenport stayed healthy, he may be the best player in football. All jokes aside, Davenport has the freak ability: 88.8 grade by PFF in 2021. Yes, you read that correctly. Unfortunately, Davenport has missed 12 contests in the past two seasons combined.

Aidan Hutchinson may be a rookie, but he is still an excellent football player. Hutch has been unstoppable this summer & quickly flashed his ability in the pre-season by having a tackle for loss. If he can squash Aaron Rodgers on numerous occasions, while having other unusual production, it would be hard to not hand him a plethora of respect. The mythical Lawrence Taylor won DROY and DPOY.

The Kansas City Chiefs defensive tackle, Chris Jones, won’t let his position (DT) limit his abilities. He’s made the Pro Bowl & garnered second-team All-Pro in two of his past three seasons. Jones had a monster 2021 campaign – despite missing three games. If Jones can stay healthy, show out in pivotal contests, and watch Aaron Donald take a step back, he could honestly win DPOY.

Josh Allen or Matthew Stafford: which QB will have the best Week 1 performance?
Is Jason Peters a good left tackle?