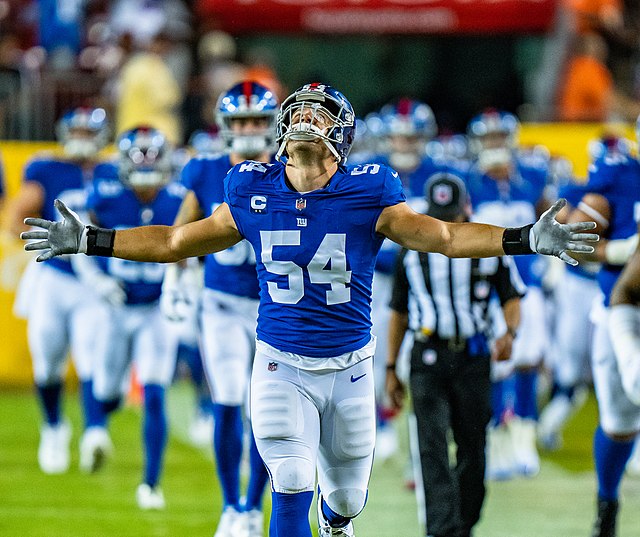 The free agent linebacker Blake Martinez is available (potentially on Tinder) and looking for the right partner. Martinez is sadly coming off a three-game season, but he did have success and sustained health in the seasons prior. In 2018, he ousted five sacks, 144 tackles, 10 tackles for loss, and 2 QB hits. He was also a stud in 2019 (3 sacks, 5 tackles for loss, and 155 tackles), & 2020 (3 sacks, 151 tackles, 9 tackles for loss, and 6 QB hits). PFF also handed him an 75.9 grade for his 2020 campaign. Unfortunately, the Giants LB, also known as Boar, wasn’t a great fit following his ACL tear with the GMEN. So, the question is: what is the best landing spot for Blake Martinez in 2022? Well, I’m going to untwine the 7 best spots for him.

In my opinion, I believe Martinez would be an upgrade over former LA Chargers draft pick Denzel Perryman in Las Vegas. Perryman may have been a tackling machine and able to garner a Pro Bowl nod, but he also had a 62.3 grade by PFF. The Raiders should really aim to keep pace in the AFC West arms race by making an even slight upgrade at the pivotal MLB spot.

CJ Mosley may be talented, but he isn’t the most well-rounded LB in the world. Mosley missed 17 tackles (which tied for eigth-most amid LBs) last season and garnered a dreadful 42 grade by PFF. They did restructure his contract recently, but I’d still love to see them bring in a fresh, intense face.

The Denver Broncos MLB Jonas Griffith has had flashes of dominance this summer, but he had a mere 30 tackles last season. He doesn’t have the most superb experience amid a Denver Broncos team that has their sights set on winning the upcoming Super Bowl. Perhaps Martinez could be a long-term fit in Denver.

The New Orleans Saints have a versatile and aggressive defense – which should bring music to the ears of Martinez. They moved on from Kwon Alexander this off-season, but it may be wise to bring in Martinez to fit in with Demario Davis & Pete Werner.

The Houston Texans would blatantly be an extremely good landing spot for Martinez. Christian Kirksey, who is the Texans current starting MLB, yielded a 50.3 by PFF last season. Martinez may not be head over heels to join Houston, but they could make the best offer to ink him.

Kenneth Murray Jr. has had injury issues & he hasn’t quite solidified himself as a stellar LB. He is healthy after his ankle surgery, but his future is a tad murky. After the Chargers brought in Khalil Mack, J.C. Jackson, perhaps they want to sign the former Giant.

I’d love to see the Baltimore Ravens target Martinez’s services. The Ravens have unequivocally a Top-3 secondary, but they could benefit from a new face at their lead MLB spot. Josh Bynes is a modest ball-player (74.8 grade by PFF in 2021), but I believe Martinez could make it difficult for Bynes to keep the keys to the defense.