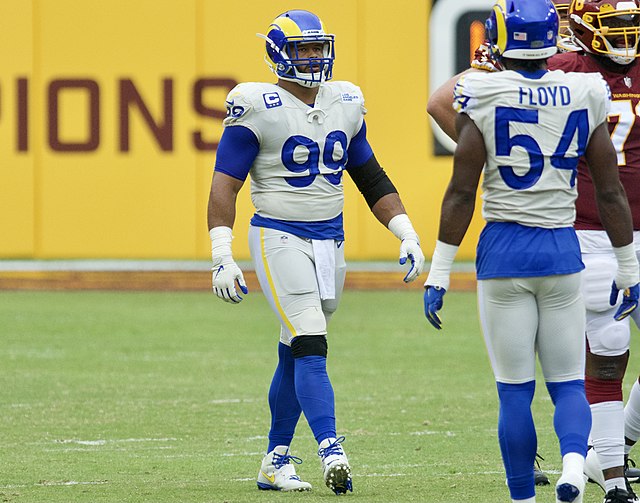 Expect the Rams pass rush to excel in 2022

The Los Angeles Rams pass rush was unusually lethal in 2021, as they ranked third in sacks (50), which stood behind the T.J. Watt-led Pittsburgh Steelers (55) & the Minnesota Vikings (51). Impressively the Rams and their ultimate QB hunter in Aaron Donald ranked second in sacks (53) in 2020, and fourth in sacks in 2019 (50).

So, how will the most tenacious human beings in LA perform in pursuing opposing signal-callers in 2022? I undoubtedly foresee the Rams being a Top-3 team in QB sacks in 2022. The Rams showcase the mythical AD, the electric Leonard Floyd (9.5 sacks in 2021 and 10.5 sacks in 2020), and A’Shawn Robinson.

Donald ousted 12.5 sacks, 25 QB hits, and absolutely stood out in the Super Bowl with a 90.1 pass rushing grade. The Rams DT has unleashed 11+ sacks in six of his prior seven seasons in the league. He’s also obtained first-team All-Pro honors in each of his past seven seasons. The Rams boldly made Donald the highest-paid non-QB in NFL history this off-season, too.

Justin Hollins, the man called on to replace Von Miller, is a prime breakout candidate for LA. He collected two sacks and 1 QB hit last season. Furthermore, he had a modest 69.8 grade by PFF. Hollins beat out Terrell Lewis for the starting OLB spot, as Lewis has ousted five sacks and 7 QB hits in his two-year career. The Rams cut ties with the D2 legend Chris Garrett. I would be shocked if another team didn’t claim the athletic freak and scrappy edge rusher.

The Rams are known for possessing a very gifted passing offense, but let’s not forget that they display a fire-breathing pass rush, too. It will be vital that the Rams can make life miserable for the mega-arm & bull-dozing QB Josh Allen in Week 1.

Allen may be the most popular MVP candidate heading into the 2022 season, but he wasn’t sinless against opponents with a violent pass rush a season ago. Last season – the Saints picked off Allen twice, the Colts intercepted the Bills QB1 twice, the Bucs snagged a pick against Allen, and Allen only threw 4 touchdowns to 1 int in his two games against the Phins. I foresee the Rams pressuring the Bills polarizing QB (who had 15 ints last season) into committing a couple of turnovers in their first battle of the 2022 season.