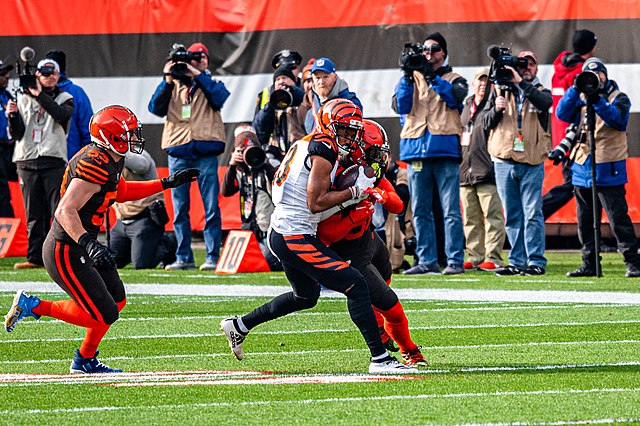 Who has the best WR trio?

It would be an understatement to say there are a plethora of tenacious wide receiver trios in this league. The first WR trio to come to mind is undoubtedly the three wideouts (Ja’Marr Chase, Tee Higgins, and Tyler Boyd) that are on the reigning AFC Champions (Cincinnati Bengals). The Bengals WR1 from LSU didn’t take long to adjust to this league – as he knocked out 81 catches, 1,455 receiving yards, and 13 touchdowns in his rookie campaign. Chase’s most blazing performance undoubtedly came against the Kansas City Chiefs in their first battle (11 receptions, 266 yards, and 3 TDs). Chase also earned an 83.1 grade by PFF. Ultimately, he won Offensive Rookie of The Year in 2021.

The Bengals WR2, Tee Higgins, wasn’t a dutz in his sophomore season, as he impressively unleashed 1,091 yds and six touchdowns in 14 contests. Higgins is well on his way to earn a hefty contract extension after this up-coming season in my opinion. The Bengals WR3, Tyler Boyd, is quite a mean WR3. The former Pittsburgh WR has ousted 800+ yds in each of the prior four seasons.

Well, who might be the second-most tenacious WR trio in the NFL?

I really believe the Saints WR trio is underrated (as are their winning chances) moving forward. I love the potential of a healthy Michael Thomas. Nick Underhill of NewOrleans.Football once stated that a healthy Michael Thomas would be the biggest positive change to their team this summer. MT might be a tad disrespected, but he can certainly be a Top-5 WR with the mega-arm QB Jameis Winston.

It can be hard to gauge the immediate production for Chris Olave, but he has been nothing short of a stud this pre-season. Olave flexed his crisp route running ability against the Packers with an impressive receiving TD in the corner of the end-zone. He is undoubtedly a Top 3 OROY candidate. Last but not least, the Saints will anticipate consistent dominance from the slot WR Jarvis Landry. He managed to unleash 970+ receiving yards in season between 2015 and 2019.

It’s impossible to put a ceiling on the 2021 Offensive Player of The Year Cooper Kupp. The Rams unbreakable wideout registered 145 catches, 1,947 yards, and 16 TDs. Well, he blatantly was the triple-crown winner.

The Davante Adams show is soon approaching. Tae will look to continue to display All-Pro numbers in his Aaron Rodgers-less world. Adams spewed out 1,347 yards and 18 TDs in 2020 and then proceeded to knock out 1,553 yards and 11 TDs last season.

Hunter Renfrow and Mack Hollins will also bring magic to the Raiders offense. Renfrow earned his first trip to the Pro Bowl in 2021 by collecting a whopping 103 catches, 9 touchdowns, and having 1,038 receiving yards. Hollins is truly an x-factor in the Raiders offense after having 4 TDs and 223 yds in a limited role with Miami last season.

The Brady bunch possess an unusually talented WR trio, to say the least. Mike Evans is the alpha WR of the group. Evans has had a 1,000+ yard season in his year and he’s made four trips to the Pro Bowl in his career. He’s also had six seasons of 8+ receiving touchdowns.

The outlook for Chris Godwin isn’t less exciting. The Bucs WR2 has ousted 1,100+ receiving yards in two of his past three seasons. Godwin was well on pace to have his best season in 2022 – expect he tore his ACL and MCL against the New Orleans Saints in Week 15. Godwin will surely have his single-season performance in 2022. Russell Gage is a sleeper for now, but he has been certainly praised as one of the very most popular season entering the upcoming season.