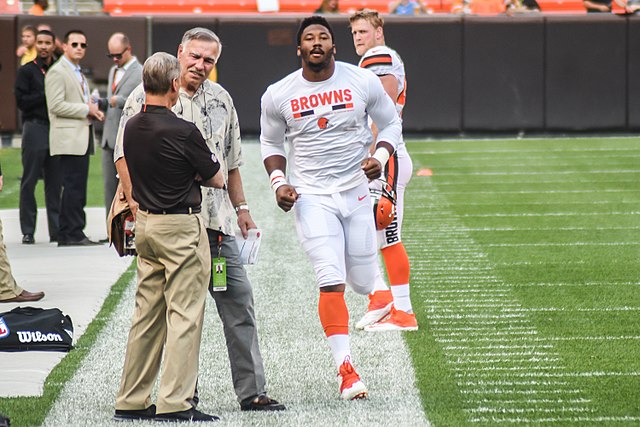 The Browns pass rush was on fire in Week 1

In Week 1, The Cleveland Browns pass rush was more fierce (and a tad deranged) than the lunatics chasing the wives that escaped Immortan Joe in Mad Max: Fury Road.

The Browns ousted four sacks (with three sacks coming from none other than Myles Garrett) on their former QB Baker Mayfield. It was clear that Mayfield wasn’t enjoying the quality of the Carolina Panthers OL on Sunday.

It was and still is extremely vital that CLE can continue to find ways to dominate with Deshaun Watson on the sideline for 11 games. The Browns were certainly able to garner production from Nick Chubb (22 attempts for 141 rushing yards). On defense, Garrett took it upon himself to dismantle the pass protection of the Panthers.

The Browns pass rush can be the key reason that the Browns can consistently find gold with their star QB MIA. Besides Garrett pushing for a DPOY award in 2022, the Browns have talented pass-rushing faces like Jadeveon Clowney and Chase Winovich (who recently cut his hair). Clowney didn’t match Garrett’s production on Sunday, but he still ousted a .5 sack. The issue with Clowney has been his inability to stay healthy — as he missed three games in 2021 and eight contests in 2020. If the former first overall pick by the Texans can stay healthy, the Browns have a Top-5 pass rushing duo with him and Garrett.

The Browns may not have their highly gifted & very controversial QB, but they still have an unearthly figure on defense (also known as Myles Garrett). The fellow AFC North squad in the Pittsburgh Steelers made the post-season in 2021, largely due to the rage from the 2021 DPOY winner T.J. Watt. The Steelers recipe for success last season could provide inspiration for the Browns in 2022 (whether the dog-pound would like to admit it).