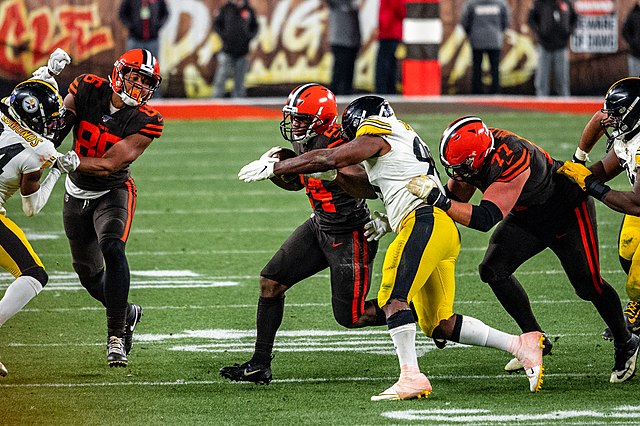 Latest takeaways from the Steelers-Brown contest

The Deshaun Watson-less Cleveland Browns were defeated by their archnemesis in the Pittsburgh Steelers last night. The Browns possess a fine 2-1 record, while the Steelers dropped to 1-2 on the season. With that said, I’m going to untwine five takeaways from the Steelers-Browns showdown.

The Browns RB1, Nick Chubb, certainly spewed havoc on the Steelers defense that was without T.J. Watt. Chubb ousted 23 carries, 113 rushing yards, and 1 touchdown on TNF. At this point, he’s collected 341 rushing yds, 4 rushing TDs, and averaged 5.5 YPC. He holds a monster 88.4 grade by PFF on the season, too.

We need commissioner Gordon, to tell the truth, that Devin Bush still stinks. He had six tackles against the Browns, but he hasn’t been anywhere near lethal in 2022. PFF has given Bush a lousy 48.8 grade for his 2022 output at this point. The veteran LB Myles Jack hasn’t been helpful, as well (a 60.3 grade by PFF this season).

Kevin Stefanski’s plan is proceeding as expected. Besides Chubb looking like a threat from the RB spot, WR Amari Cooper flashed excellence by hauling in 7 catches for 101 yds (averaging 14.4 YPC) and a TD. Let’s not forget that the former Cowboys WR garnered 9 grabs for 101 yds and a TD the week prior.

The Steelers wideout Diontae Johnson wasn’t a dud with his 8 grabs for 84 yards last night. Johnson has registered 21 catches for 196 yards on the 2022 season thus far. Furthermore, he’s garnered at least 10 targets in each match-up. After inking a two-year contract extension last month, the Steelers WR is set to be a free agent in the 2025 off-season.

Jacoby Brissett may compete at the over-glorified QB spot, but he was still a sharp figure for the Browns last night. He unveiled 2 passing touchdowns, 220 passing yards, and blatantly took care of the football with zero turnovers. I’m positive that Browns fans are delighted with the improvement in Brissett’s performance from a week ago.