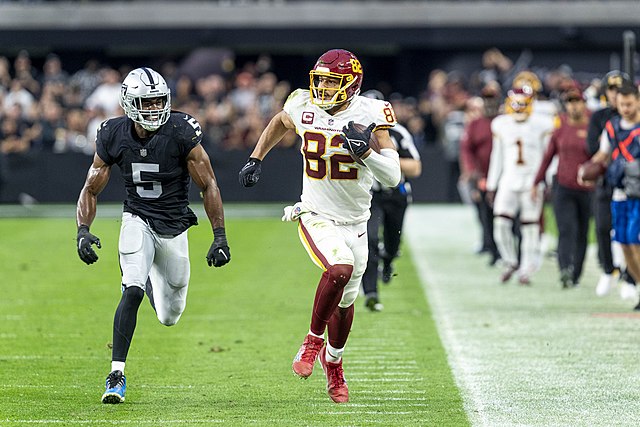 There are a plethora of under-the-radar tight ends that are worth discussing heading into Week 3. With that said, I’m going to dive right into five TE sleepers to target.

The man of the hour, David Njoku, ousted nine grabs (on 10 targets) for 89 yards and a touchdown last night. Meanwhile, Donovan Peoples-Jones and David Bell combined for three catches against the Steelers. The scary part is that Njoku doesn’t even have Deshaun Watson at the helm. The Browns TE is owned in 33% of ESPN leagues & 51% of Yahoo leagues.

There may still be room for the illustrious Rams TE Tyler Higbee on your roster (owned in 50% of ESPN leagues). Higbee garnered nine targets (after a whopping 11 targets in Week 1 against a deadly Bills defense) and ousted several receptions in Week 2. Ultimately, he’s second in TE targets at this point. Fantasy Pros has slotted him as the seventh-best TE moving forward.

Logan Thomas, also known as Taysom Hill before Taysom Hill, dazzled with a touchdown grab last week. He also had had 11 targets in the past two contests. Thomas registered 110 targets, 72 receptions, 670 yds, and six TDs in 2020. With Carson Wentz, he could certainly be in line to have a season at least as similar as his 2020 campaign. He is owned in 33% of Yahoo leagues & 39% of ESPN leagues, so there’s more than an “only hope” to get him off the bench.

The Minnesota Vikings TE Irv Smith Jr. is only owned in 35% of ESPN leagues, but he’s starting to climb the ladder. He impressively hauled in a touchdown and three catches on eight targets last week. Don’t sleep on him due to his complete in-action in Week 1. The Vikings TE will feast when opponents focus on the potential OPOY Justin Jefferson.

The New Orleans Saints TE Juwan Johnson (who is a bit of a deep sleeper) edged out Adam Trautman for the keys to the starting TE spot. Last week, he grabbed four catches for 40 yards. ESPN has projected Johnson to reel in 706 yards & 102 targets this season. At this point, Johnson has garnered a 69.2 grade by PFF for his work. It may be wise to target the TE in a week against a dreadful pass defense.