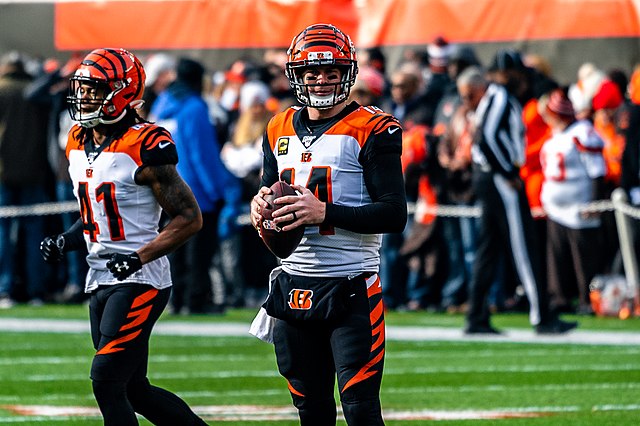 Is Andy Dalton underrated in 2022?

The Red Rifle, also known as Andy Dalton, is preparing to start against the Minnesota Vikings in London tomorrow. Dalton is filling in for the injured Jameis Winston, who has also undoubtedly struggled with minor injuries over the prior few weeks.

In 2019, he was the miserable captain aboard a sinking ship. In that season, the Bengals had a 2-11 record, while he threw 16 TDs to 14 ints. He joined the Dallas Cowboys in 2020 and was called upon to replace Dak Prescott for a whopping nine contests. Dalton registered a potent 64.9 completion percentage, 2,170 passing yards, 14 passing TDs to 8 ints, but he did have a losing record (4-5). Last season, Dalton struggled to find success in an abysmal Chicago Bears offense, as he unveiled 8 passing TDs to 9 ints.

It may seem like the Saints have shinier toys than his prior weapons in Chi-town, but Dalton will not have Cantguardmike (171 yds and 3 TDs in his last three contests) against the Vikings. In addition to MT missing the game, Jarvis Landry is questionable for the match-up. The Red Rifle hasn’t shown any signs of being a stat machine, so it will be quite difficult for him to show uncharacteristic highs with a less-than-favorable crew of skilled players.

The Saints have had turnover issues from their QB1, so could Dalton make fewer mistakes with the pig skin than Winston? Well, Dalton has only thrown 2+ ints in each of his past four starts. I expect Dalton to be pressured to keep pace with Captain Kirk and make mistakes against the Vikings, who have the capacity to drop a few touchdowns on the Saints.

Nonetheless, he is more healthy than Winston. I don’t expect him to imitate a bruised-up Jameis Winston by missing wide-open receivers in short-yardage situations on first and second down. It was regarded by countless Saints sources that he was nicely in sync with the Saints toys this off-season. He should be able to make magic happen with Chris Olave, but I’m not ready to express that he should throw 3 touchdowns and zero interceptions. I foresee Dalton throwing around 200 passing yards and 2 TDs to 1 int. I love Dalton’s journey in the league, but I don’t expect him to return to being the “Red Rifle” this weekend and potentially later this season —- then proceed to be targeted to be a QB1 for teams in 2023.