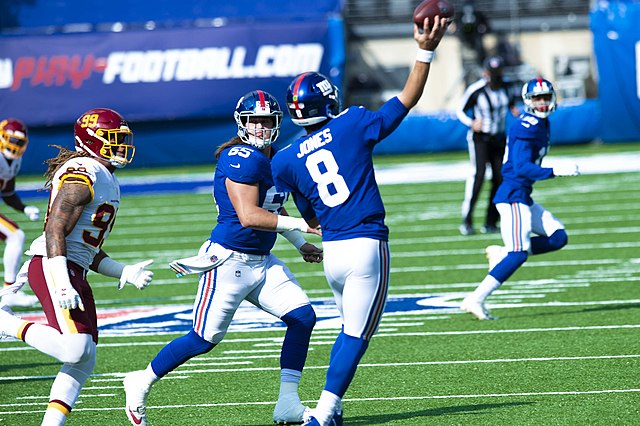 When Richie James signed with the New York Giants as a free agent, no one expected him to be more than anything but a solid backup receiver. If anything, he would serve as a kick returner because of his experience with previous teams serving that role.

Fast forward to today, and James looks like more than just a guy. In fact, he may be the only one keeping this receiving corps afloat. With Sterling Shepard out for the year, Daniel Jones may need to rely on James more than ever this season.

James was drafted in the seventh round by the San Francisco 49ers in 2018. Appearing in 13 games, he caught nine passes for 130 yards. He also caught his first career touchdown against the Rams in week 17. The wide receiver also returned a kickoff for a touchdown in his rookie season.

He set career highs in receiving yards and receptions in 2020. But, he would miss the entire 2021 season after being placed on the injured reserve list. This was due to a knee injury.

The 49ers decided to not bring him back for 2022 and let him walk into free agency. On March 25th, 2022, the New York Giants decided to take a chance on the former Middle Tennessee State receiver.

Through three games, James has shown that the 49ers may have made a mistake not bringing him back. He’s been clearly the best receiver on the Giants, leading the team in receptions and a close second in receiving yards.

Put this into perspective: Deebo Samuel leads San Francisco in receiving with 12 catches and 131 yards. James has 14 catches for 146 yards. He would have been the best receiver on the 49ers. Jimmy Garoppolo could have used him after leading his team to just ten points last Sunday night.

Thankfully, James has been as close to a star as possible for Big Blue. With the Giants having the most expensive receiving core in the NFL, they have underwhelmed in the worst way possible.

Shepard is out for the year, Kenny Golladay can’t catch, David Sills has lost his magic, and Darius Slayton has been in a reduced role. Oh, and both Kadarius Toney and Wan’Dale Robinson are hurt. Daniel Jones cannot perform to the best of his abilities if his weapons can’t stay on the field or perform well enough to be reliable.

This is where James steps in. Take the Dallas game, for example.

This man is getting open for his quarterback, something the other guys have struggled to do.

This man is getting open for his quarterback, something the other guys have struggled to do. James has at least four catches through three games, and he may be targeted even more in the coming weeks. He’s not a superstar, but he is sure looking like one.

Joe Schoen: you got a bargain with this guy. Let’s hope Richie James continues to show out against Chicago.