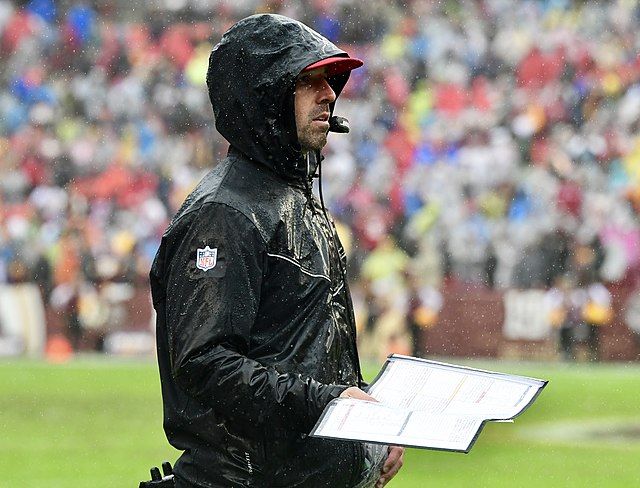 Is Kyle Shanahan overrated in 2022?

The San Francisco 49ers have an authentic face at head coach named Kyle Shanahan. His creative play designs on offense and ability to create elite players at the WR spot, TE position, and even QB have been unparallel. However, Shanny has failed to win a Super Bowl and taste the glory of being a world champion as an OC or as an HC. With that said, I honestly believe that the son of Mike Shanahan is a tad overrated.

It’s tragic that the 42-year-old Kyle Shanahan has reached the big dance twice, yet he came out on the losing side in each Super Bowl face-off. Of course, in Super Bowl LI, his offense failed to be a slight threat to Bill Belichick’s defense in the second half. It was a Cinderella story for Shanny and his offense in Super Bowl LIV — as his team only registered 20 points in the game (including zero points in the fourth quarter).

The cherry on top of criticisms against the 49ers ring leader is that he has blatantly struggled to create a consistently successful team. He has only had a mere two winning seasons in his 49ers tenure. Even if the 49ers were like the walking dead with their massive injury report in 2020, he failed to dig up motivation and juice from the squad. The 49ers were 6-10 in 2020. It should be noted that the New Orleans Saints set an NFL record of 57 different starters last season, according to NFL Next Gen Stats. Nonetheless, Sean Payton was able to muster out a winning record (9-8) with his squad, which even leaned on QB3 Trevor Sieman for four games.

The NFC West is gutsier than any John Wayne movie & Shanahan can’t afford to oust a losing season with the savvy veteran Jimmy Garapollo in 2022. Furthermore, he doesn’t deserve to be recognized as a mystical HC if the 49ers crumble in an NFC West division that showcases a surprising 2-2 Seattle Seahawks team. Shanahan has gifts and he has the potential to be a Super Bowl-winning coach in his lifetime, but he needs to take a page out of the ole Belichick playbook on being a persistent, dangerous NFL club.