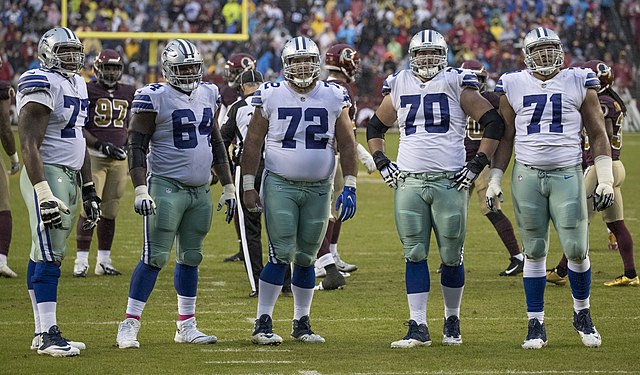 Will Tyron Smith be cast into Canton?

The Dallas Cowboys have a freak talent at left tackle by the name of Tyron Smith. The Texas legend, Duane Jerry Jones, drafted Smith ninth overall in the 2011 NFL Draft. The rampage by Smith was established in 2013 (when he made his first Pro Bowl). It didn’t take long for him to be a cream of the crop OT after 2013, as he garnered first-team All-Pro honors in 2014. The behemoth-like figure also snatched AP honors in 2016. In his entire career, Smith registered a whopping eight Pro Bowl selections.

With that enunciated, there is a pivotal, intriguing question surrounding the Boys LT: Is Smith a future Hall of Famer?

I have zero doubt that Smith is a HOF lock at this point in time. He has been a true John Wick-like figure for the Boys OL over the past decade. His accumulation of awards led him to be named to the 2010s All-Decade team. It would be more than a shame if one of the top OL in that span would not be cast into football heaven.

Similar to fellow Cowboys royalty, Tony Romo, Smith has failed to win a World Championship in his career. Nonetheless, Smith certainly still has time at 31 years old to win a Super Bowl. It should be noted that former elite Rams LT Andrew Whitworth won a Lombardi trophy at the age of 40 last season. The potential cap casualty in Dallas, Smith, may not win an SB ring with the Boys, but he can surely aspire to taste the Super Bowl triumphs elsewhere.

I expect Smith, who is coming off a Pro Bowl season in 2021, to play a few more seasons in this league. If he can garner a couple of more Pro Bowl seasons or win a Super Bowl with a loaded squad, he should cement himself as a first-ballot HOFer.