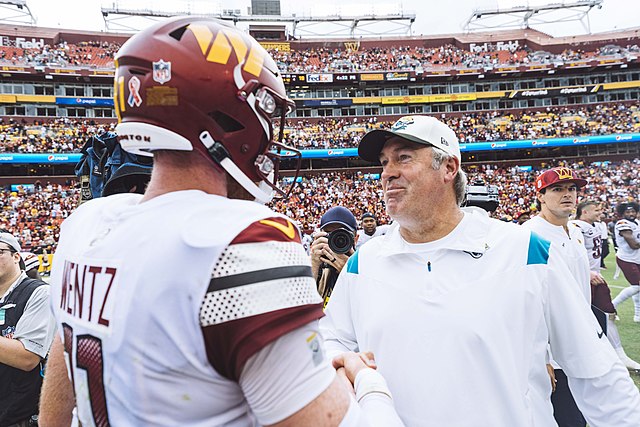 Why Doug Pederson can win COTY

Doug Pederson has got the Jacksonville Jaguars in a good place. The team may be just 2-2 at the moment, but most people didn’t expect them to win a second game until much later in the season. In their first four games, they’ve beaten the Los Angeles Chargers, who many think are big players in the AFC, and fought the Philadelphia Eagles, who are the NFL’s only undefeated team, for all four quarters. They whipped the Indianapolis Colts and showed Week One rust in their loss to Washington Commanders.

Pederson is a large part of the reason for the Jaguars’ improvements. He’s got the team playing with a confidence they haven’t had since the 2017 season. With a number of improvements from key players and some additions as well, they’re in a position to continue with that confidence. If they can continue to exceed expectations and make a legitimate run for the postseason and the AFC South crown, there’s a real chance for him to win NFL Coach of the Year.

When the voters consider who should win Coach of the Year, team records factor heavily into those decisions. Pederson could benefit greatly from this due to the weakness of the AFC South. The Colts have really struggled so far this season, though their 2-2-1 record suggests they’re even with the Jaguars. But that just isn’t so. The Titans, also 2-2, have yet to define themselves with any consistency. The Texans look like league bottom-dwellers once again.

Given the talent on the Jaguars’ roster, they should be able to easily take care of the Texans and the Colts for a second time. The Titans are a bit of a wild card as far as what to expect from them as the season grows older. Coming up with a ten-win season or so for the Jaguars could put Peterson right in the driver’s seat to win Coach of the Year.

Trevor Lawrence has already made seriously notable progress since the Jaguars’ disastrous 2021 season. Bringing in Christian Kirk from the Arizona Cardinals has obviously played a big part in that progress, but the coaching of Pederson has as well. Lawrence was supposed to be that generational quarterback coming out of the 2021 NFL Draft and it’s going to take some time before we know whether he fulfills that potential.

If Lawrence continues to get better throughout this season, leading the Jaguars to a number of big wins along the way, it’ll be difficult to deny the impact of Peterson on that. There are still plenty of growth spurts for the quarterback and the team.

Urban Meyer was horrible for the Jaguars’ players and the organization’s culture. In 2020, the year before Meyer came on board, the team won just one game. Turning around the team and its culture in stark, dramatic fashion will bode well for Pederson winning the Coach of the Year award, particularly when that could be framed against the failures of Meyer to fulfill his obligations as a coach last season.

If the Jaguars’ players look like they’re enjoying themselves while winning games, that means Pederson has done his job in fixing the culture problem that has come to define the franchise in the wake of Meyer’s influence.

Ultimately, the Jaguars need to win. They sit at 2-2, but they’ve got plenty of unfinished business if Peterson is going to make a serious play at winning Coach of the Year. There are perhaps no other coaches in the NFL right now who are better suited to win the award this season.