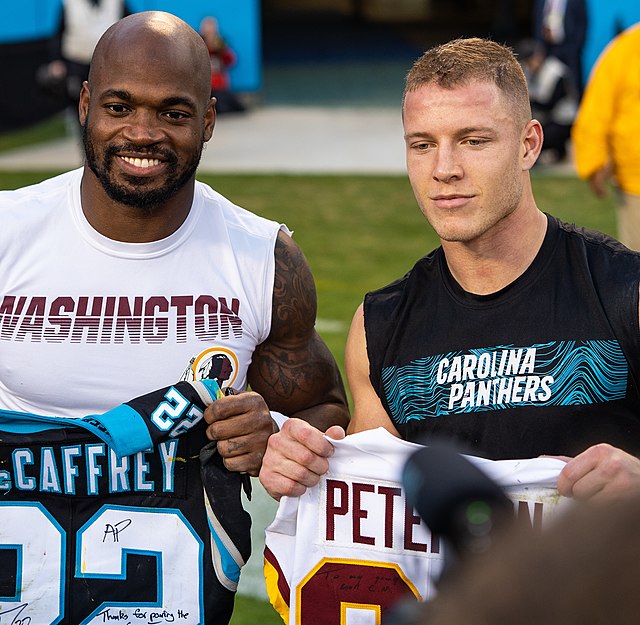 Will Christian McCaffrey be cast into Canton?

What better time to write a potential Hall of Fame piece than just after Christian McCaffrey just put together the first triple crown (1 rushing TD, 1 receiving TD, 1 passing TD) since 2005?  There is no better time.  In this article I will be discussing the career of premier back Christian McCaffrey, and if his career trajectory could be one that could be enshrined in Canton, Ohio someday in the future.  So without further ado, let’s get right into it.

McCaffrey is also a 1-time pro bowler and a 1-time first-team all-pro, and frankly one of the most impressive halfbacks in recent memory, even with the injuries.

So…is he on a HOF trajectory?

Projecting a Hall of Fame career when the player is 26 years old is difficult, as this player still is just entering their prime years, and we saw that this past weekend with McCaffrey.  Comparing him to Gale is just for effect, as I left out the fact that Sayers won CBPOY, OROY, 5 first-team all-pro selections, 4 pro bowls, 2x rushing leader, 1x scoring leader, and a Bears legend.  However, with CMC now on a competent franchise, seemingly healthy, and with a run-heavy coach who knows how to get backs production?  As well as a potential Super Bowl window?  There is potential here for CMC to get his name back into the elite status and really cement himself with some hardware.  We will see where his career takes him, but he is on the right track for now.