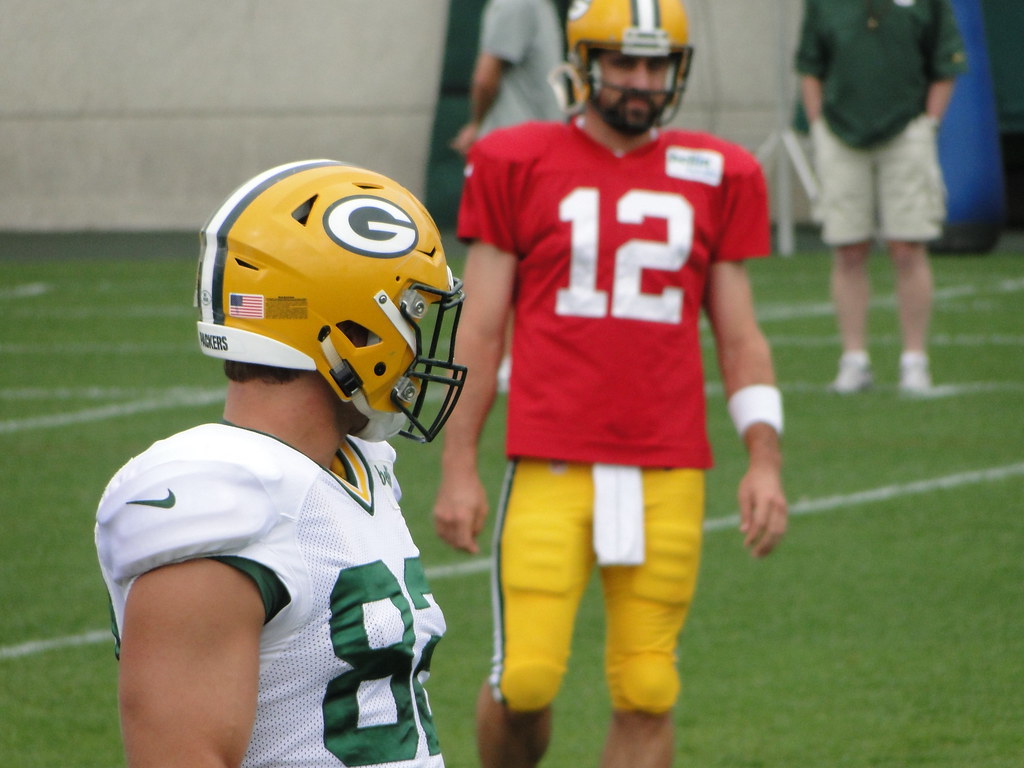 "Ryan Taylor, Aaron Rodgers" by Kyle Engman is licensed under CC BY 2.0

Is The Packers WR Core Average?

We all know Mike McCarthy is out of town, but Aaron Rodgers has still been dancing with the devil when it comes to wide receiver aid. Matt LaFleur hasn’t gone out on a limb to acquire top-notch players at the position.

Rodgers has lobbied for WR help and lobbied about lobbying for WR help, but he’s been left with overtime fumbles and settling for field goals. Thankfully, Davante Adams has revolted to looking like the NFL’s top WR as of late. Yet, the Packers haven’t mustered out stable talent at the position for the MVP quarterback as a whole.

Matter of fact, the Packers haven’t had a No. two WR exceed 690 receiving yards since 2016 — when Jordy Nelson was the No. one and Adams was the No. two. The Packers may not need to break the bank for a No. two WR, but they need more talent on the perimeter and versatility in their offense in general.

Aaron Rodgers was NOT happy with the outcome of the Packers loss in Lambeau against Tampa Bay. If the Packers lose in playoff fashion next year at the expense of failing to score 30+ points, I don’t believe I’d have to go out on a limb to say Rodgers would strongly consider leaving….. especially in this age of QB feud.

With that being reflected upon, where could the Packers search for a WR? Would they opt to draft a rookie early, mid, or late? Perhaps, they take the WR route through free agency. If Rodgers gets a weapon via free agency, which seems like he should attract at least one, whom could it be?

Aaron Rodgers deserves a do it all weapon at his disposal — Insert Cordarrelle Patterson into the equation. Patterson can play slot WR, take deep routes on the outside, and play RB.

The Packers are taking a hit in the receiving back category: Jamaal Williams and all-purpose RB Aaron Jones are both free agents with their futures up in the air. Patterson can not only play WR but take reps at RB — especially on third-down situations.

Patterson is also an electric player in space at WR. Rodgers could use more players to create their own plays when he escapes the pocket and drops it to his weapons underneath.

Not only would Patterson be a fine WR/RB, but he could be a significant upgrade at kick returner. It would be a nightmare to worry about the Packers MVP with even better field position. If Jamaal Williams does in fact leave, there will be a vacancy at KR to fill.

Patterson could be a great value pickup for the Rodgers led orchestra. He was under a $5 million deal in a Bears dysfunctional offense. If the Packers could get Patterson around the same figure, they could utilize him beyond that dollar signed.

The Ravens slot weapon will likely take a short-term-prove deal outside of Baltimore. Willie Snead was a consistent, third-down target for Lamar Jackson, but not quite the electric playmaker in the Ravens run-first approach.

Snead hasn’t accumulated a thousand-yard season since his 984-yard outing in 2015 as a Saint. I believe the 28-year-old WR still has that feat in the back of his head and he will look to excel out of Greg Roman’s offense and in a pass-heavy attack.

Snead has quietly had over 650 receiving yards in three of his six seasons active. He’s also had three years with a catch rate over 68%.

Snead is the perfect slot fit for the Packers at the right price, age, and productivity to even take his game to the next level. We’ve seen Rodgers turn James Jones into the NFL’s leading touchdown receiver, so don’t be surprised if a slot weapon like Snead comes over and harasses defenses while Tonyan + Adams face their matchups.

Yes, I know Jordan Reed is labeled as a tight end. Yet, the often slot WR is exactly the kind of player the Packers need. Despite his injury concerns, he’s still a very talented player at age 30.

What could be a better fit for Reed and Green Bay? Reed can show he’s very talented in an elite offense, while not having to take a heavy workload. Reed could get his red zone packages and be the No. two TE for Aaron Rodgers, while the Packers could get a quality No. two TE, depth at slot WR, and on a cheap deal.

Reed didn’t pose any godly numbers last season, but the 49ers may have had the worst QB situation in the NFC, outside of the injures EVERYWHERE. But, Reed did have prolific showcases.

Reed showed what he was capable when Jimmy G was in sync early on in the year. In Week 2, Reed flashed 7 receptions, 50 yards, and a pair of touchdowns.