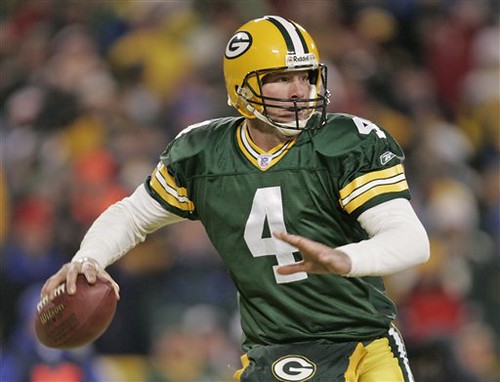 "Brett Favre" by kyleburning is licensed under CC BY-ND 2.0

The Packers Have Had a Few Legendary QBs

The Green Bay Packers are one of the NFL’s most longest and successful franchises. Founded in 1919 by Earl “Curly” Lambeau, the Packers quickly established themselves as an NFL powerhouse despite being the smallest city in the league. The Packers won a total of 9 NFL championships in just 60 seasons before the AFL and NFL merger in 1966.

After the merger the Packers dominated the first two seasons of the NFL. They finished with a 21-6-1 record over the first two seasons and comprehensively won the first two Super Bowls by a combined margin of 68-24. Headlined by Hall of Fame coach Vince Lombardi and quarterback Bart Starr, the 1960’s Packers were perhaps the NFL’s greatest dynasty and the city of Green Bay became accustomed to success. But after Lombardi left the team in 1968 it became a different story.

The Packers subsequently fell into a long period of losing and would wait 30 years until they tasted victory again, when a Mississippi gunslinger named Brett Favre returned the franchise to the NFL summit alongside defensive lineman Reggie White and coach Mike Holmgren.

The wait for the next Super Bowl was not as long. In 2005, the Packers lucked out in the draft and selected the franchise’s next great QB Aaron Rodgers. Rodgers had to wait three seasons before he could become a starter, but it all paid off when the Packers won the Super Bowl just five seasons after he was drafted.

The rich history of Packers quarterbacks has led to Green Bay becoming a staple in the playoffs throughout the history of the NFL. The franchise is forever intertwined with these three names, but in what order do they rank in terms of playoff success?

When Brett Favre arrived in Green Bay the Packers were a shell of their former selves. The Packers organisation had entered a long period of futility and only made the playoffs twice over a span of 25 years. The success of the franchise had diminished over time after Vince Lombardi resigned as coach and the fans didn’t have much to cheer about. The only highlight for the franchise during the time period was Hall of Fame wideout James Lofton (1978 – 1986) who restored some sort of hope to a city that craved success.

So in 1992, when the Packers traded a second round pick for a young, strong-armed sophomore quarterback from Southern Mississippi the fans were sceptical. As it turned out, that trade became the greatest decision the franchise ever made.

Favre brought success to Green Bay almost immediately. In just his second season he carried the Packers to the playoffs for the first time in a decade and upset the Detroit Lions 28-24. That was the first taste of success for a team that would go on to enjoy a lot more in the years to come.

The Packers would go on to win another 8 playoff games in the 1990’s, with the most notable one being the victory in Super Bowl XXI. The Packers, off the back of Favre’s third straight MVP award, defeated the New England Patriots 35-21 in the Superdome to win the franchise’s third Super Bowl trophy.

The Packers made the Super Bowl the year after but lost to John Elway and the Denver Broncos. That loss brought upon the end of the 90’s success after going 9-5 in six postseason appearances. With high expectations entering the new millennium, the Packers were only able to gain 3 playoff wins before Favre’s retirement and exit from the Packers following the 2007 NFC Championship loss.

The Favre led Packers were a wild ride of joy, ecstasy and heartbreak. The team often lived and died on the arm of Favre who’s gunslinger mentality often got the best of him in big games. His legendary career with the Packers was immortalised when he was inducted to the Pro Football Hall of Fame in 2016. His time as quarterback with the Packers will forever be remembered, but only ranks him third on the list, behind two all-time Packer greats.

Aaron Rodgers had the impossible task of replacing Brett Favre in Green Bay. Taking over from one of the franchise’s greatest ever quarterbacks was never going to be easy but Rodgers and the Packers did it seamlessly.

The three-time MVP quarterback enjoyed success similar to Favre’s early in his career. He made the playoffs in his second year as a starter and went on to win the Super Bowl as the 6- seed the following season. The Super Bowl XLV win was the Packers fourth as a franchise and remains the only one Rodgers has won in his career.

Rodgers was named Super Bowl MVP and went on to win regular season MVP the following season. The 2011 Packers finished the regular season 15-1 and were ready to repeat as champions until they ran into the New York Giants. Since that loss, the Packers have gone 7-7 in the playoffs and have lost four times in the NFC Championship game.

While the losses in the playoffs have continued to pile up the play of Aaron Rodgers has not. Rodgers currently has the fourth highest postseason passer rating (100.5) of any quarterback in NFL history while also being tied for the 2nd most ever playoff touchdown passses (45) with Joe Montana. Rodgers passed Favre in all-time playoff touchdown passess in the 2020 NFC Championship game and did so playing in less games while throwing less passess.

His consistent level of play coupled with the team’s success is why Rodgers slightly edges Favre on the Packers all time quarterback list. Both quarterbacks had similar career paths when it came to team success, but when it boils down to it, Rodgers gets the slight advantage because of playoff consistency and level of play.

Bart Starr, together with Vince Lombardi, dominated the NFL in the 1960’s and undoubtedly remain the league’s greatest ever dynasty. The Packers steamrolled opponents during the decade and won NFL championships in 1961, 1962, 1965, 1966 and 1967. The final two championships won were the NFL’s first two ever Super Bowl’s.

Lombardi’s Packers used a simple yet effective approach using the power sweep running game to crush opponents into the ground. The ground and pound approach led to five NFL Championships in seven seasons with Lombardi as head coach while having an overall record of 9-1 in the postseason.

While the running game was the Packers bread and butter, the continuity of the team relied heavily on a skinny, Alabama quarterback to run the show. Starr’s influence on the Packers cannot be underestimated. He has the highest postseason passer rating (104.8) of any quarterback in NFL history, best winning percentage (90%) of any quarterback to start a minimum of 10 games, best touchdown percentage (7%), best interception percentage 1.4% and most adjusted yards per attempt (9.0). Starr’s records become even more impressive when you take into consideration the era he played in. From 1960-1967, the average quarterback passer rating ranged from 64.0 to 66.6. Starr’s rating was 40 points higher than the league average at a time when throwing the ball was difficult for almost every team. His playoff resume speaks for itself (5 time champion, 2 Super Bowl MVPs) and will go down as the greatest of all-time in Packers postseason history. Aaron Rodgers, it’s now your turn.