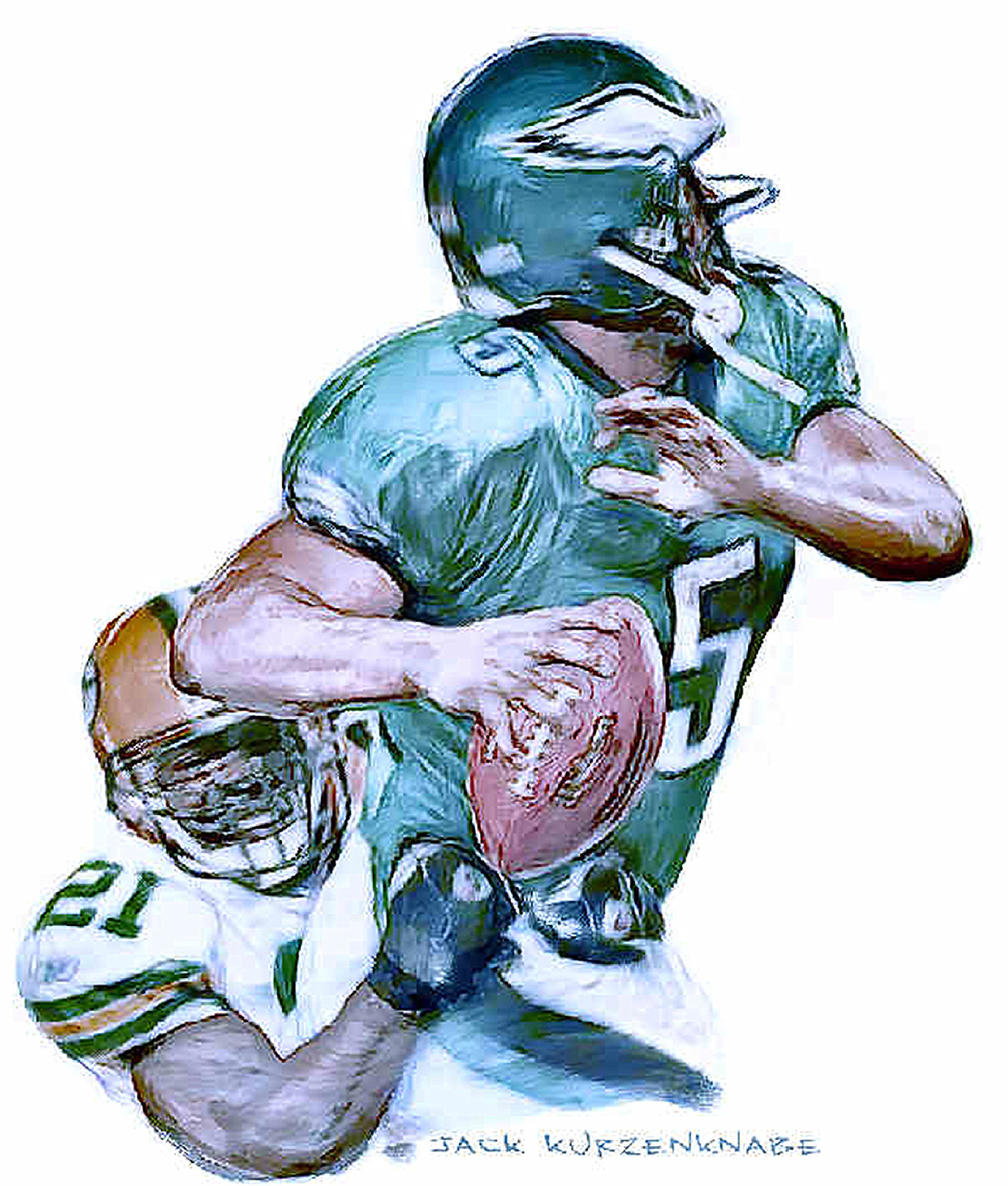 Where Does Michael Vick Stand?

With the 2020 season in the rearview, the NFL is successfully two decades into the 2000s. The Eagles have seen a lot of change over the past 20 years, including their first-ever Super Bowl victory. With Carson Wentz being traded before the 2021 season, now is the perfect time to look back at the Eagles quarterbacks over the past 20 years. Looking strictly at quarterbacks who started a majority of games in a season (sorry for all you Jeff Garcia, Mark Sanchez, and Kevin Kolb fans out there) and judging off of the legacy left behind, here are the top five Eagles quarterbacks since the year 2000.

Well someone had to be number five”¦. A former first overall pick, Sam Bradford’s career with the Rams was hampered by constant injuries.. After looking like he was finally reaching his potential in 2013, Sam Bradford tragically tore his ACL. Bradford would tear that same ACL once again the next preseason, missing the entire 2014 season.

In Chip Kelly’s mind, this meant it was the perfect time to trade for the former first overall pick. In a trade that was extremely puzzling and upsetting to the Eagles fanbase, the Birds traded fan favorite quarterback Nick Foles, a fourth, and a second-round pick(!) for Sam Bradford and a fifth. Bradford would have an extremely mediocre season with the Eagles, leading to Philadelphia trading up for Carson Wentz in the 2016 NFL Draft. Bradford would net a first round pick from the Vikings that would end up being Derek Barnett. It’s not great when the best moments of a player’s tenure were the players acquired as a result of getting rid of him. The Sam Bradford trade will go down as one of the worst moments from the maligned later years of the Chip Kelly era.

Michael Vick was one of the league’s brightest young stars before it all was gone due to his involvement with a dog fighting ring in 2007. He was suspended for two years, and spent 21 months in a federal prison. Vick was given a second opportunity with the Eagles, signed by Andy Reid in 2009. The highlight of the short lived Vick era in Philadelphia was the 2010 season that saw Michael Vick lead the Eagles to the playoffs. Vick made the Pro Bowl and was named comeback player of the year. While he wouldn’t see the same level of success over the next two years, Michael Vick revitalized his NFL career and gave Eagles fans a fun year after a few years of quarterback controversy.

I think the biggest lasting legacy of Vick was how he turned himself around with his chance in Philadelphia. He has done great work as an animal rights activist since his involvement in the dog fighting ring. Given a chance in Philadelphia, Michael Vick worked hard both on and off the field and turned a lot of fan’s negative opinions about him around.

Carson Wentz will go down as one of the most polarizing figures in Eagles history, despite being a pretty laid back person himself. Surprisingly, Carson Wentz had the 2nd longest tender in Philadelphia on this list. At the start of his career it looked like Wentz was going to be the face of the franchise for years to come. After an up and down rookie campaign, Carson Wentz made everyone believers in 2017. Many Philly fans still believe years later that he deserved to win MVP. Had he not been injured, I feel Carson’s career would’ve gone a lot different in Philadelphia, and he’d still be here today. Unfortunately, as well all know, Wentz tore his ACL against the Rams in week 13, and then watched backup Nick Foles capture the hearts of the fanbase and win Philadelphia their first Super Bowl.

I don’t believe Carson Wentz, no matter how good he played, was able to ever truly escape quarterback controversy from some fans and media (a noticeable theme when looking at all of these quarterbacks). It’s a shame because if you look at his career, Wentz had a really good tenure with the Eagles before the implosion this past season. Wentz, despite only playing five seasons in Philadelphia, is fourth in: wins, touchdowns, completions, and passing yards.

When healthy, Carson Wentz looked like a hard working franchise quarterback that the team and fan base could rally behind. The problem was that he couldn’t always stay healthy, which might be unfair seeing how he can’t control his own health. This past season, his worst as a quarterback, certainly did not help his status amongst fans, with a good amount of the fan base already divided on him. He might be a divisive figure now, but I feel once there’s been some time removed from the trade we’ll all be able to really appreciate Carson’s time in Philadelphia.

For years, Donovan McNabb was the guy in Philadelphia. The Eagles were at their most successful in the early 2000s. Donovan McNabb was one of the key components for their great run in the early 2000s that saw them reach four conference championships and a super bowl. McNabb holds virtually every record an Eagles quarterback can hold. He is the franchise record holder in: wins, passing yards, and passing touchdowns.

McNabb was the gold standard for Eagles quarterbacks for years, and really looking back at it, he was the last true franchise quarterback for the Eagles. All of the quarterbacks listed above weren’t the long term solution for the Eagles at quarterback. Carson Wentz played the longest out of all of them for the Eagles, but he still didn’t have the longevity of guys from years past such as Ron Jaworski or Randall Cunningham. McNabb lasted longer than all of them. McNabb was truly the last franchise quarterback for the Philadelphia Eagles and he accomplished everything there was to accomplish”¦ except bringing Philadelphia a Super Bowl.

Nick Foles might not have the decorated career that Donovan McNabb had with the Eagles. He may not lead the Eagles in all of the statistical categories that Donovan does. He may not have started as many games or as many seasons as some of the players on this list. But in the end, Nick Foles won Philadelphia their first ever Super Bowl.

The goal of football is to win. Every team and every player in the NFL holds the same dream and goal, to hoist the Lombardi trophy at the end of the year. Philadelphia’s passionate fanbase waited years for another championship. “Just one before I die” was the saying of many older fans who had not witnessed a championship from their beloved Eagles since 1960. Philadelphia is first and foremost a football town. Sure fans love the Phillies, Sixers, and Flyers, but not in the same way these fans love football. It’s ingrained in the culture of Philadelphia. Nick Foles bringing a championship to Phillly was one of the most magical moments the city had ever seen.

In all honesty, Nick Foles’ entire career as an Eagle was magical. Nick Foles has such an interesting career. In every other city that he’s played in he’s been below average. Yet as an Eagle, he has led the Franchise to the playoffs three times, including the magical Super Bowl run in 2017. There’s a statue of Nick Foles outside of the Linc for a reason. He captured the hearts of the city time after time and will go down as a winner who brought Philadelphia their Super Bowl.