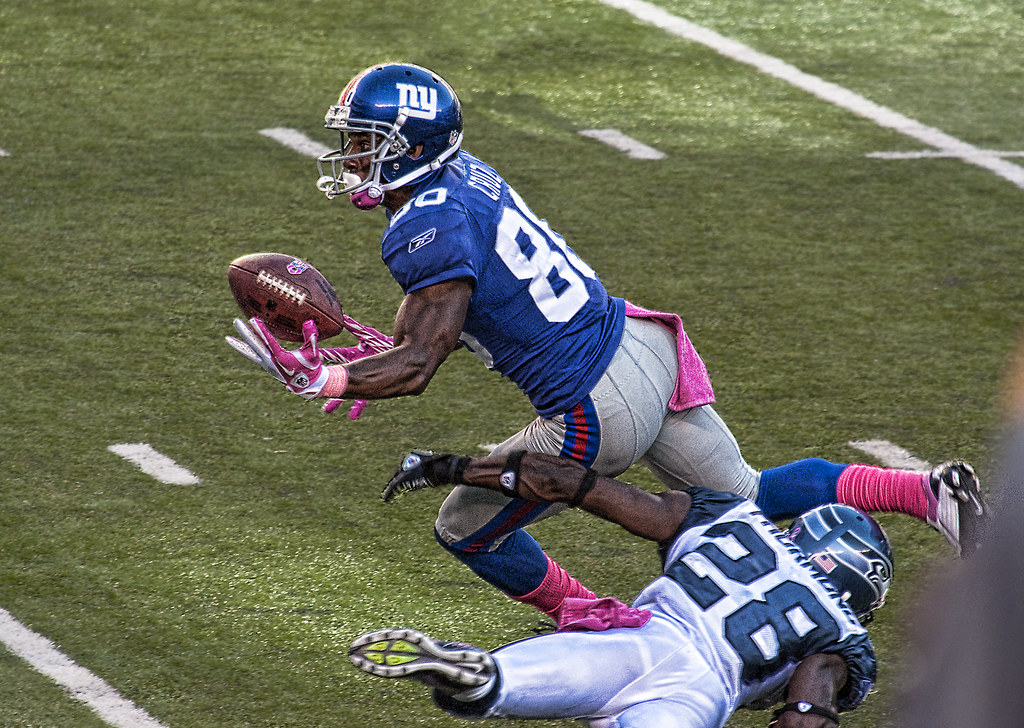 "Victor Cruz makes the catch" by KatVitulano Photos is licensed under CC BY-ND 2.0

Which weapons could Big Blue look to add?

There were high expectations for the New York Giants receiving corps in the 2020 season. With a stellar rookie year from Darius Slayton, an impressive debut for Golden Tate, and another solid year from veteran Sterling Shepard, the Giants seemed to have assembled a competent group to complement Daniel Jones. However, Jason Garrett’s 2020 Giants offense showed that the Giants ought to add playmakers during the 2021 free agency. The Giants also released slot receiver Golden Tate on March third. While Darius Slayton has established himself as a capable deep threat, he is not fit to be the number one option on an offense. Sterling Shepard is a great underneath receiver who can succeed in the slot, but he should not be the Giants’ top target.

To further complicate things, the Giants will have to cut some of their current talent if they want to go after the top free agents. In ordinary years, offering a $20 million contract to a wide receiver would not require getting rid of other talent. However, due to the Covid-lowered salary cap, if the Giants wish to dole out big money to a player like Allen Robinson or even Kenny Golladay, they would have to free up money and release impactful players. Dave Gettleman and the Giants front office will have to be aware of the salary cap this offseason, which may lead to them targeting cost-effective playmakers instead of those that demand big salaries.

Kenny Golladay is one of the top dogs on the free-agent market, regardless of position. His combination of size, athleticism, and contested-catch prowess makes him an ideal alpha wide receiver for any team. However, acquiring Golladay’s services may be rather difficult. Golladay missed a few games during the 2020 season due to injury and stayed off the field to avoid re-aggravation before potentially hitting the open market. The Lions will have the opportunity to franchise tag Golladay, thus ensuring at least one more year with him or the chance to trade him for draft capital. If Golladay is tagged and the Lions are looking for a top-50 pick in return, the Giants would be better off looking at other options.

If the Lions make no effort to retain Golladay, then the Giants should aggressively pursue him. During his phenomenal 2019 season, Golladay ranked 4th in yards per reception, 1st in touchdowns, and 7th in contested catch rate despite placing 23rd in target quality. Golladay has demonstrated that he can be an elite downfield and red zone threat and he is the exact type of player that the New York Giants need. The Giants, who checked Golladay’s price at the trade deadline, should offer him a multi-year contract averaging 15-18 million dollars per year.

A lesser-known name that the Giants should target is Tim Patrick. With Courtland Sutton returning from injury, Patrick would be the fourth receiver on the Broncos depth chart. While Patrick is a restricted free agent, meaning Denver can match any offer that the Giants give to Patrick, they likely will not feel comfortable paying more than a few million dollars for what is essentially a backup wide receiver.

Patrick’s 6-foot 4-inch 210-pound frame provides a different body than anyone currently in the New York Giants wide receiver room. While Patrick is not as physically gifted or technically skilled as Golladay, he is no slouch at the wide receiver position. In 2020 Patrick finished 23rd in yards per target and 20th in true catch rate with only one drop on the season. The Giants can likely offer Patrick a 2-3 year deal with $5-6 million dollars each season and expect him to wear big blue come Week One. If the Giants were to go budget at wide receiver and add Patrick during free agency, they must invest significant draft capital in another weapon. Players like Kyle Pitts, Jaylen Waddle, and Rashod Bateman should all be considered heavily come draft night if Tim Patrick is the main free-agent acquisition.

A final free-agent target at the wide receiver position is Ohio State product, Curtis Samuel. Samuel came out of college as a hybrid player, with almost equivalent numbers of carries and catches. Dave Gettleman, former general manager of the Carolina Panthers, drafted Samuel with the 40th pick of the 2017 NFL Draft. Gettleman has a propensity for signing players that he previously drafted, like defenders David Mayo and James Bradberry. While Samuel only stands at 5 foot 11 inches and 196 pounds, he might be a player that Dave Gettleman targets due to his existing connection.

The Giants offense already has a smaller receiver who can carry the ball in the backfield in Sterling Shepard, but Curtis Samuel is uniquely gifted behind the line. Last season Samuel carried the ball 41 times and averaged 4.9 yards per carry. Samuel is no slouch in the receiving game either. He had the 12th highest true catch rate and finished 28th in yards per route run during his 2020 campaign. It is important to mention that Samuel only broke out during his fourth year, which could make teams wary of paying him this offseason. However, if the Giants can sign Samuel to a three-year, 28 million dollar contract, they should heavily consider adding him to their roster.

The Giants’ offense was stagnant in 2020, producing only 300 yards and 17.5 points per game. While a healthy Saquon Barkley will improve the offense, a running back can only go so far. The key to a successful modern offense is a dynamic passing game. Attacking the wide receiver position in free agency with an aggressive mindset should be on Joe Judge, Jason Garrett, and Dave Gettleman’s minds this summer.

While cutting players like Levine Toilolo and letting one of Dalvin Tomlinson or Leonard Williams walk will undoubtedly hurt, these actions are necessary if the Giants want to improve Daniel Jones’ surrounding weapons. The Giants’ defense, led by genius Patrick Graham, will remain a plus unit even if they lose a starter. However, it is the offense that will ultimately decide the fate of the New York Football Giants.