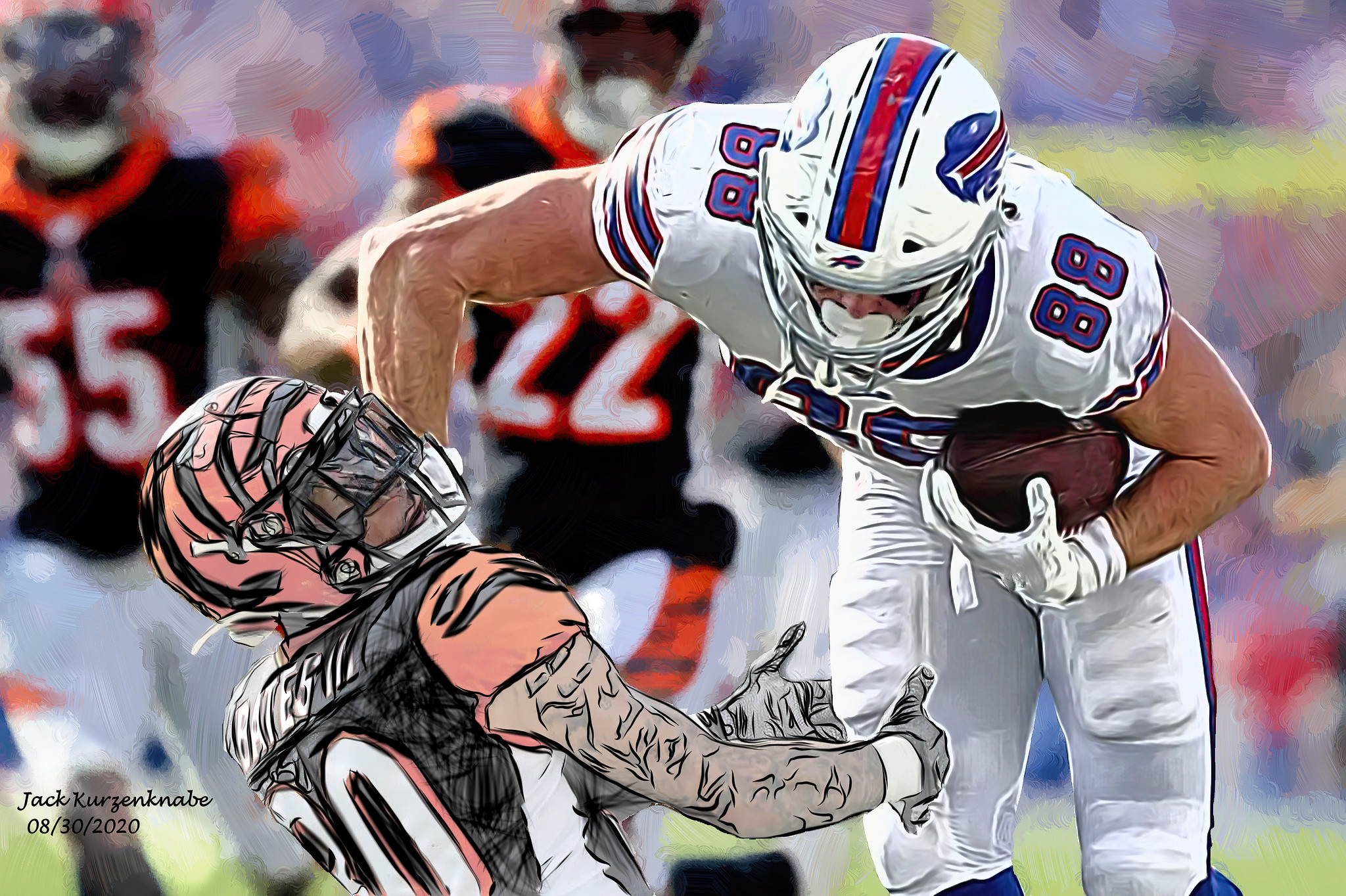 In his end-of-the-year press conference, Brandon Beane brought up the tight end as a position that he feels Buffalo needs to improve at. Beane referenced how Buffalo’s tight ends were not huge threats and other teams did not have to game plan for that group on Buffalo’s offense. Buffalo had very limited production from the tight end position. The group’s yearly production is below.

As you can see, Buffalo’s tight end group was essentially ineffective most of the year. While Dawson Knox does flash potential however has yet to fulfill that potential that fans see. The only two players from last year’s group under contract for the 2021 season are Knox and undrafted rookie Reggie Gilliam who had a solid year as a TE/FB Hybrid who mostly contributed on Special Teams where he forced a fumble and had two tackles. The Bills have limited cap space so they cannot necessarily throw all their money at just the tight ends position. Luckily, several options on the market can make an impact all while not commanding top dollar. Here are 5 free-agent tight end options for the Buffalo Bills.

Kyle Rudolph was just recently cut by the Minnesota Vikings and is a free agent. The former teammate of Stefon Diggs became one of the most talented tight ends on the market. With over 4,000 career yards Rudolph is an experienced tight end. Rudolph stands at 6 foot 6 and 265 pounds so he would bring significant size to the Bills tight end room. This could be valuable because Rudolph can also be used as an inline tight end for blocking and goal-line situations. Rudolph’s experience as a receiver would not only help the Buffalo passing offense but could also help spark some more development from Dawson Knox. Buffalo should look to add Diggs’ former teammate and give Josh Allen a big target.

Jared Cook was just recently cut by the New Orleans Saints who have a long way to go until they can get under the cap. Cook is an 11-year vet who has spent time with Tennessee, St. Louis (now Los Angeles), Green Bay, Oakland (now Las Vegas), and New Orleans. Cook has over 6,000 careers receiving yards and has 18 touchdowns over the past two seasons with New Orleans. While cook will be 34 years old by the time the 2021 season starts, he has never relied on elite athleticism for success so his age will not alter his production. Cook is another bigger tight end on this list, standing at 6-foot 5 Cook utilizes his height and his great hands to be a great red-zone target. His 18 touchdowns in the previous two years show his value once you get closer to the red zone. While Cook may not be a huge impact over the rest of the field or as a blocker his value in the red zone can give the Bills an additional target for Allen.

Jonnu Smith is likely the highest risk on this list. His contract would be based on potential more than proven production. Smith comes from an offense in Tennessee where the emphasis of the offense is to run, unlike the Bills who like to pass. Smith has seen his role in the offense increase every season however because he was in a run-first offense his stats never jumped off the page.

While Jonnu Smith does not have eye-popping stats, he does have eye-popping athleticism. The 6-foot 3 248-pound Smith runs a 4.6 40-yard dash. Smith has even more potential than the Bill’s current starting tight end Dawson Knox and has slightly outperformed him in the league. Smith does come with risk. Because of his potential, Smith will likely receive a contract that pays more than his previous production warrants. Brandon Beane does hesitate at deals like this because if the player does not pan out it becomes a problem. However, in this situation, giving Josh Allen an elite athlete at a tight end could make the Bill’s offense even more of a powerhouse.

Dan Arnold is a sleeper option for Buffalo. Coming from a pass-first offense in Arizona Dan Arnold fits naturally to Brian Daboll’s system. Arnold is a tall (6-foot 6) and lean (220 pounds) player. He has very insignificant production at the professional level however he had a very impressive season in Arizona. With 31 receptions, 438 yards, and 4 touchdowns Arnold had a solid role in an offense that had almost as many playmakers as Buffalo’s does. Where Arnold fits in with Buffalo is if Brandon Beane and Sean McDermott decide to give Dawson Knox a partner in the starting lineup instead of trying to replace him. Arnold would fit that role perfectly. With his size being very unique Brian Daboll could deploy Arnold all across the offense.

Trey Burton is an underrated option that Buffalo should consider. Buried in the solid Colt’s Tight End depth chart Burton had an okay year but as a tight end with a large role has proven that he can be valuable. Burton is a former do-it-all guy when he plays under Urban Meyer in Florida. At Florida, Burton played Wide Receiver, Tight End, Fullback, and Quarterback. The smallest tight end on this list Burton comes in at 6-foot 2 and 224 pounds. Burton is another guy that could be Dawson Knox’s backup or partner if Buffalo cannot find a number 1 option. Burton is useful because with his experience all over the field he can be lineup in the backfield, as an inline tight end, or even split out as a receiver. Burton is one of those do-it-all guys that Sean McDermott and Brandon Beane love to have. In addition to that, Burton also plays special teams which Beane values heavily in his depth players.