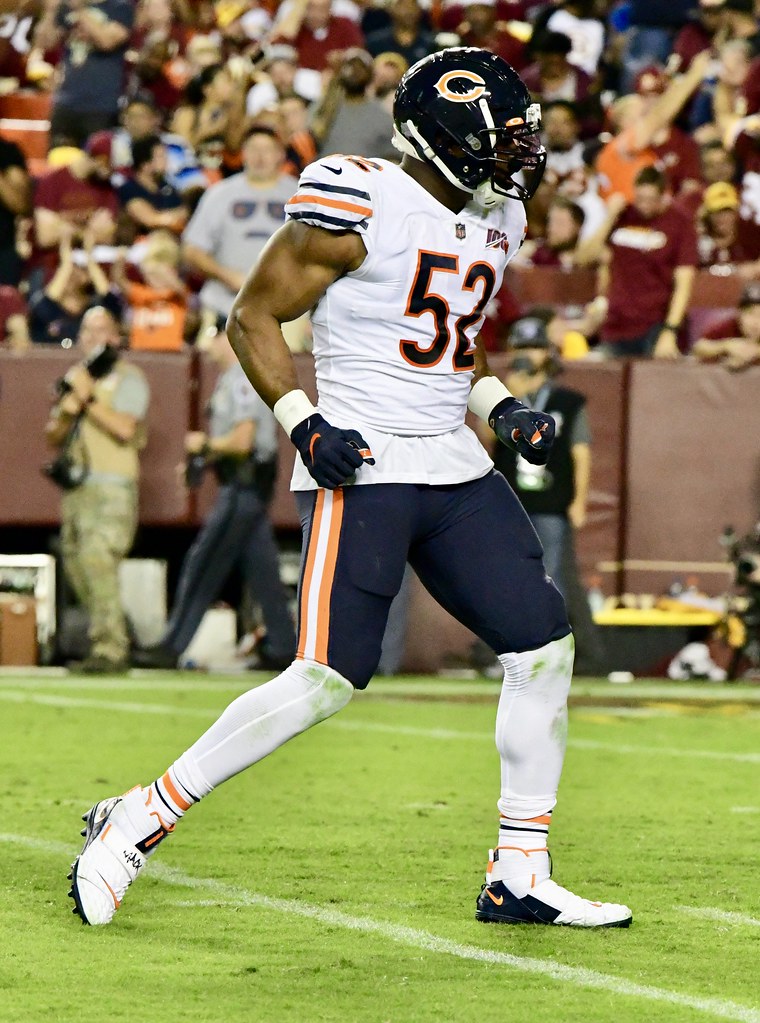 "Khalil Mack" by All-Pro Reels is licensed under CC BY-SA 2.0

The Dallas Cowboys have entered their most polarizing offseason since Tony Romo retired in 2017. Jerry Jones will have to decide Dak Prescott’s fate, the approximate contract for Zeke/Gallup/Lamb, and the most notable issue: retooling the defense.

Cowboys need to beef up their defense, particularly on the defensive line. In the age of elite passing attacks, championship teams need to be able to get after the quarterback.

Cowboys were 20th in sacks per game, which isn’t quite the complement for their QB that was posting Top 5 numbers from his position when healthy. How could Dallas look to ramp up their pressure from the interior and edge production? I’m going to unveil a few defensive lineman candidates for Dallas to make a move on.

The Saints edge rusher that’s been given an unfortunate nickname as “two firsts” would be an attractive player for Cowboys. Since Sean Payton traded two first-round draft picks to trade up and select the edge player, he’s underachieved for his draft stature.

Davenport had 4.5 sacks, 6 sacks, and 1.5 sacks over the last three seasons. The main concern with the 6’6 DE that runs a 4.5 is his inability to stay healthy and on the field. Davenport has missed 11 games in his last three years combined.

Even though Davenport is a high risk with his health and his sack production hasn’t been overwhelming, he’s had many glimpses of why he was drafted so high. In his first three games back, Davenport had 12 pressures, eight QB hurries, and 1.5 sacks. He showed out while splitting time with Trey Hendrickson and Cameron Jordan, as well. Davenport slowly regressed after this three game burst, as Hendrickson ran away with being one of the top NFL edge players.

When the Saints had Davenport in the lineup, he was also beneficial for his versatility. He would often line up at DT and he was a serious threat with twists and in one on one situations with opposing guards.

Davenport will be going into the final year of his rookie deal, so the Cowboys could get the best out of the Saints DE right before he cashes in. And perhaps, they unveil the true potential in the former UTSA stud and they are able to really formulate a young, lethal front seven.

If the Bears strike out on acquiring a top notch QB, then Allen Robinson and Jimmy Graham proceed to leave, it would make sense to ship out the heavily invested player on a rebuilding team. It will be a very similar situation with Mack as it was with Watt in Houston.

Cody Benjamin of CBS Sports states how Khalil Mack would be the most logical trade chip in a trade for Russell Wilson. It may be unlikely that the Bears land Wilson, but Mack should still remain the top trade chip in a blockbuster trade scenario.

Jerry Jones has been rumored to land big name defenders like Earl Thomas in the past, plus he’s opted to take more glamorous players like Ceedee Lamb amid an atrocious defensive roster. Jones may be tempted to bring in a huge talent at a key need position.

If the Cowboys really wanted Mack in the building, there are “a few” contracts that could be restructured or terminated to land a much more proven player. Players like Michael Gallup, Jaylon Smith, and Zeke Elliot could have their hefty contracts worked with to create space for the generational talent Mack.

According to Packers Wire, Preston Smith has now been involved in trade discussions. If the Cowboys are looking hard for a quality option right now, look no further than Smith.

Smith had a steep drop in performance from his 2019 season. After the former WFT OLB recorded 12 sacks in 2019, Smith only recorded 4 sacks in the 2020 campaign. However, the Packers edge player had 870 snaps in 2019, while recorded slightly fewer with 814 in 2020.
The 28-year-old was hit with a down year in the middle of a huge contract. Expect Smith to be motivated and proving himself more in a situation where he gets more playing time and gets to face below-average OL competition in the NFC East.