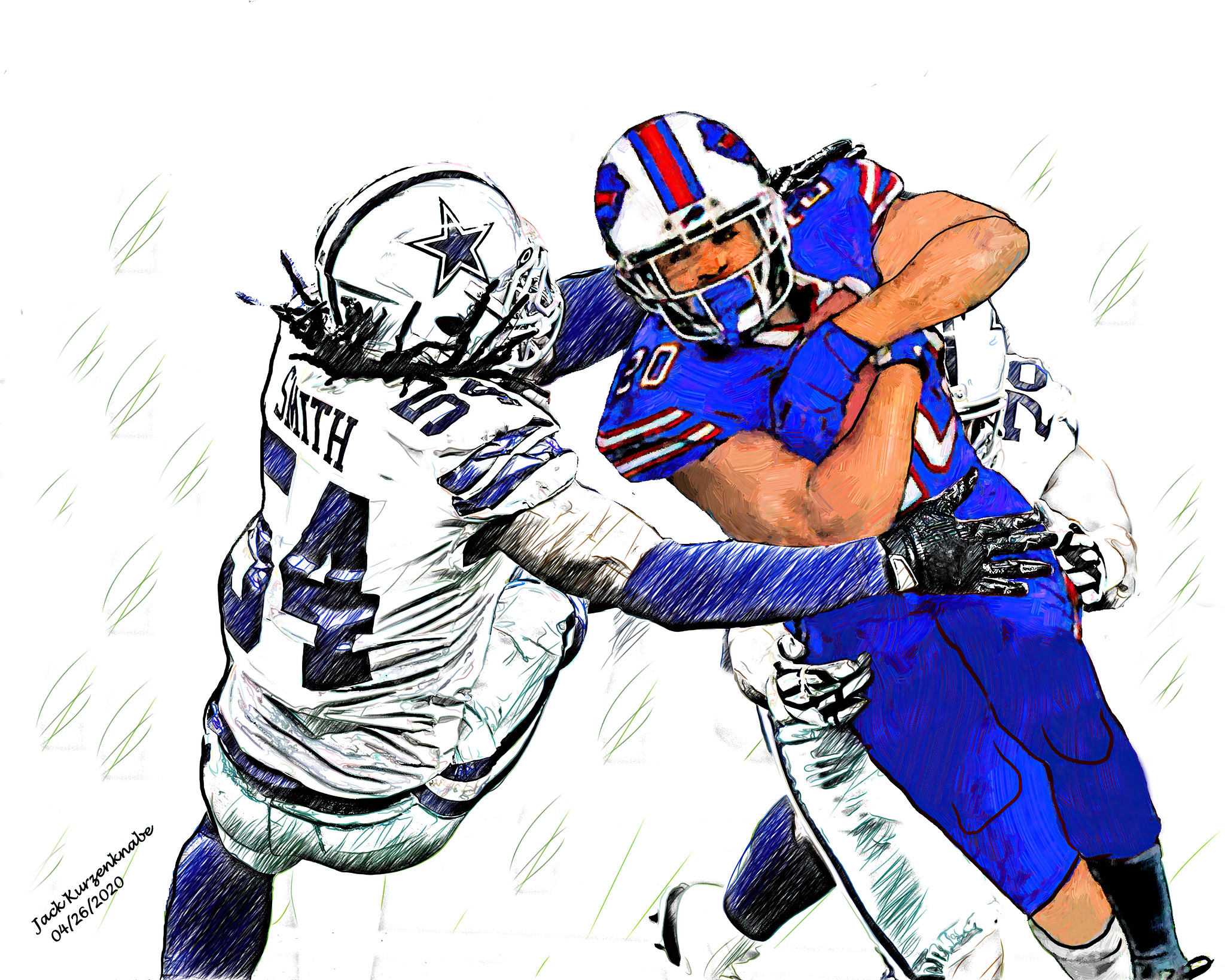 Who are three players that nobody is talking about for Buffalo’s first selection?

The Buffalo Bills hold the 30th pick in the 2021 NFL Draft. There has been plenty of pre-draft speculation on what Buffalo will do with the pick. While players such as Travis Etienne, Najee Harris, Caleb Farley, Gregory Rousseau, and Asante Samuel Jr. have been extremely popular names surrounding the pick. General Manager Brandon Beane is not afraid to move around in the draft as well. Buffalo has a history under Beane moving both up and down in the NFL draft. With no 4th round pick this season many experts have coined Buffalo as a team that is likely to move down in the draft. However, there is still a very good chance Buffalo sticks with the 30th pick and selects a player. Brandon Beane’s philosophy is to build and develop within the draft. 1st round picks offer an advantage to that philosophy because all 1st rounders come with a 5th-year team option. That 5th-year option can be huge down the road for a Buffalo team that is about to hand out a massive contract to star quarterback Josh Allen. Buffalo does not have any massive needs and can realistically pick the best player available when it is their turn to select a player. With no NFL combine and a very limited season for scouting, player interviews, and player visits expect every team to have completely different draft boards causing most all projections to be inaccurate. Once the 30th pick arrives, here are three dark horse options that Buffalo could ultimately select.

One of Buffalo’s needs is a pass-rushing defensive end. After the world saw what the Tampa Bay Buccaneers did to Patrick Mahomes a quality pass rush is so important. It is extra important for a team in Buffalo that will likely have to go through the Kansas City Chiefs and Patrick Mahomes every year to get to the Super Bowl. Add that onto the fact that Buffalo does not have the best pass rush and their leaders in sacks were Mario Addison and AJ Klein with a mere five sacks each. While Buffalo has been linked to several pass rushers in the draft one name that is consistently left out of the conversation is Carlos Basham Jr. Basham is not the best pass rusher in this class however he is perhaps the most complete defensive end Buffalo could get at the 30th pick. Basham is explosive and very instinctive with quality physical traits for a three-down defensive end. Basham is very good a reading plays as they unfold and has strong fundamentals, so he is rarely caught off guard at any moment. Where Basham struggles is that he is not the most refined pass rusher. Basham does not have the quickest first step which means he has to rely on pass-rushing moves to get by an offensive lineman. While Basham did have some success at the college level most of his moves however on film it is easily recognizable that he will have to improve that part of his game to be a successful pass rusher in the NFL. Carlos Basham Jr is very similar to Shaq Lawson, a player that Buffalo fans surely remember. What makes Basham a value pick is that he can defend the run well from his first day on the team. While his pass rushing is a step behind with the right coaching and atmosphere Basham can turn into a really solid pass rusher. He may never be a star, but Basham can easily be a starter in the NFL for 8-10 years.

Pat Freiermuth is the most intriguing player on this list because Brandon Beane stressed how Buffalo lacked a serious threat at a tight end during the 2020 season. In the offseason, Buffalo lost Tyler Kroft and Lee Smith while adding only Jacob Hollister at the position. You do the math. Buffalo has not upgraded at the tight end position in an offseason where Brandon Beane said he would stress the improvement of the position. Pat Freiermuth is no doubt the second-best tight end in this draft. Kyle Pitts is the clear number one but could go as high as 4th overall in the draft making him less of a dark horse candidate and more of an “impossible add” for Buffalo. One of the reasons we have not heard Freiermuth in the conversation at 30 is because Buffalo is in win-now mode and tight ends are notoriously known to take at least a couple of years in the NFL before they have a big impact. Regardless, Freiermuth is still a candidate at 30 for Buffalo because of how complete his game is coming out of college. Add his well-rounded game with the ideal frame for a tight end and Freiermuth may be able to contribute well early on. A solid receiver with a wide catch radius and the ability to complete catches through contact Freiermuth has similar traits to a tight end like Hunter Henry in the receiving game. Freiermuth is also a really solid blocker coming out of college. At Penn State Freiermuth consistently was asked to put his hand in the dirt and run block for James Franklin’s pro-style offense. Freiermuth is a well-rounded player however he lacks and serious run-after-the-catch threat and does not have top-end speed. While he certainly will not be a Travis Kelce level player in his career Freiermuth has all the traits to become a top 15 tight end in the NFL.

Josh Meyers was a three-year starter for Ohio State and played physical football as the leader of the Buckeyes line in the Big Ten. Meyers has terrific strength for a center and although he is tall for a center, he does a great job of getting to the second level and always moving his feet. Meyers was a very good blocker in pass protection because of his tall frame and reach. While Meyers does have tons of strong traits and a very good film to back it up, he plays very stiffly because he is not overly athletic. Certain interior lineman could be gone by 30 and if Buffalo likes what Meyers can bring to the table, he has more than enough talent and potential for the pick to be justified. While this is the least sexy pick the Buffalo Bills could make Meyers would be picked for his long-term impact as opposed to helping right now. With Center Mitch Morse in the last year of his contract and having a rocky 2020 season the position may be up for grabs in 2022 or if Mitch Morse’s poor play continues. The Bills do not have a true center to back up Morse and Meyers could hold down that role while being a depth option at guard which is the position, he started his Ohio State career at. When the 2022 season comes around Meyers can earn a starting spot. Buffalo is an extremely pass-happy team and having a center who can pass block is extremely important for Josh Allen’s success as a quarterback.

Overall, Buffalo has a ton of options at 30 in the draft. There usually is a unanimous agreement in the NFL what the top 15-20 or so players in the draft are. However, after that first tier of top-level players, there are about 15-30 payers who could be picked in the final ten or so picks in the first round. Buffalo will likely have tons of players they have been linked to on the board when it is their time to pick. While many speculate, they could trade back if Brandon Beane and Head Coach Sean McDermott really like a player you can expect him to be taken 30th overall.