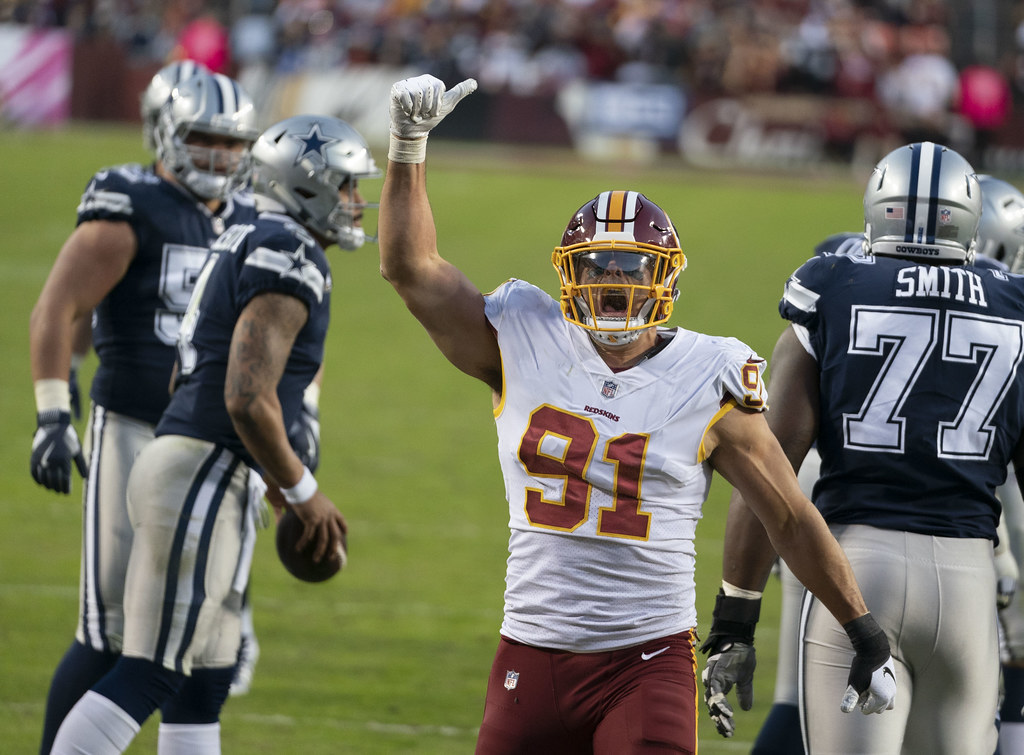 Where will the veteran edge rusher end up?

With free agency basically over teams are looking at the draft and how they can rejuvenate their roster for next year. However, there are still plenty of guys out there who can fill a whole on a team. One man who is still available is defensive end pass rusher Ryan Kerrigan. Kerrigan was drafted by the Washington Football Team back in 2011 and has been a starter ever since. However, with the emergence of Chase Young and Montez Sweat on either side of the defensive line, there is little place for Kerrigan. He is a four-time pro bowler and has amassed over 90 sacks in his career and although he is now 32 years of age he is still a quality player. With that in mind we have found five teams that need to sign Ryan Kerrigan.

The Jacksonville Jaguars are in a full rebuild at the moment but you cant bring in great young talent everywhere. When you look at their draft picks you would expect Trevor Lawrence and a stud running back to come in. One area that they probably wont focus on in this draft is at edge rusher. With that in mind it makes sense that they pick up a quality free agent who they can bring in cheaply. Cap space is not a problem for Jacksonville who still have over $29m worth of money to play with.

Another reason that this would be a good move is that Jacksonville have a young defense. Although you don’t want an old defense you do need some experience and Kerrigan would be ideal for that. Having a guy who has been a four time pro bowler can only help the younger guys there. This move could also benefit Kerrigan as it would give him the chance to have a starters role, which is what he wants. Not only that but this could be his last big pay day in his career and the chance to finish his days in sunnier circumstances.

The Dallas Cowboys had a tough season last year and the defense was shown to be needing a lot of help. Although most of the attention went on the season ending injury for Dak Prescott, the defense needs major improvement. Bringing in an experienced edge rusher like Ryan Kerrigan would not be the worst idea. They don’t have a large amount of cap space but they could get a deal done if they wanted to. A high quality, experienced player is something the Cowboys are in need of.

Also, most of the top edge rushers will go early in this years draft and the Cowboys need to fill many holes. It is rumored that they will go for a cornerback in the first round. If they do go down this route bringing in Kerrigan would be the smart move. On top of that the Cowboys are favorite to win their division so he could be playing in the playoffs next year. The only reason this doesn’t happen is that he decides he wont play for Dallas after a long career with rivals Washington.

The LA Chargers are another team that could do with extra depth at the edge rusher position. The Chargers were decent on offence last year but struggled to win games, largely due to their defense. Finishing the season with a 7-9 record was ok considering they were in transition but they need to show improvement this year. Finding the money to bring in Kerrigan will not be an issue either as they have over $16 of cap space.

It is possible that the Chargers could draft an edge rusher this year but it would seem unlikely. The biggest area they need to improve is on the offensive line. They started this by bringing in Corey Linsley in free agency and a first round offensive lineman would make sense. The most important thing that the Chargers need to do is to protect new franchise QB Justin Herbert. With that in mind a cheap free agency pick up, like Kerrigan, makes a lot of sense.

The New York Giants are a team who are looking to make strides this upcoming season. It has been made clear by the Giants owner, John Mara, that the patience for success is drying up. There was some big money free agency signings this year but they still need some edge rusher depth. The defense looked much better last year but the offence struggled finishing the year at 6-10. Brining in an experienced edge rusher who could be a great team member will improve that defense further.

The main areas that the Giants need to improve is on the offence and that is where they are likely to go in the draft. If they are not going to bring in any young edge rushers then they need to bring in someone who is talented and affordable. Currently the Giants have got very little cap space but with a bit of accountancy trickery they could get Kerrigan in. However, it will depend if Kerrigan would be happy playing for another rival of Washington’s, where he has spent his entire career.

This feels like an obvious team who would be interested in Ryan Kerrigan’s services. The Houston Texans are in a bizarre situation currently with a big overhaul of the team in a few years. In free agency they went on a spending spree bringing in over 20 players on short contracts. It feels like it could be a long time till the Texans get back to being a playoff team and so they need to improve. They are short in many places and edge rusher is one of them meaning that Kerrigan could help fill a hole for a few years.

Not only do they need quality players to come in they also have a problem when it comes to the draft. They don’t have a first or second round pick this year so they are limited to the quality they can bring in. If you cant get a good edge rusher through the draft then they have to go out and buy one in free agency. They have got around $9.5m cap space available to them and so have plenty of money to get Kerrigan in. If Kerrigan would be up for this move is another story though.