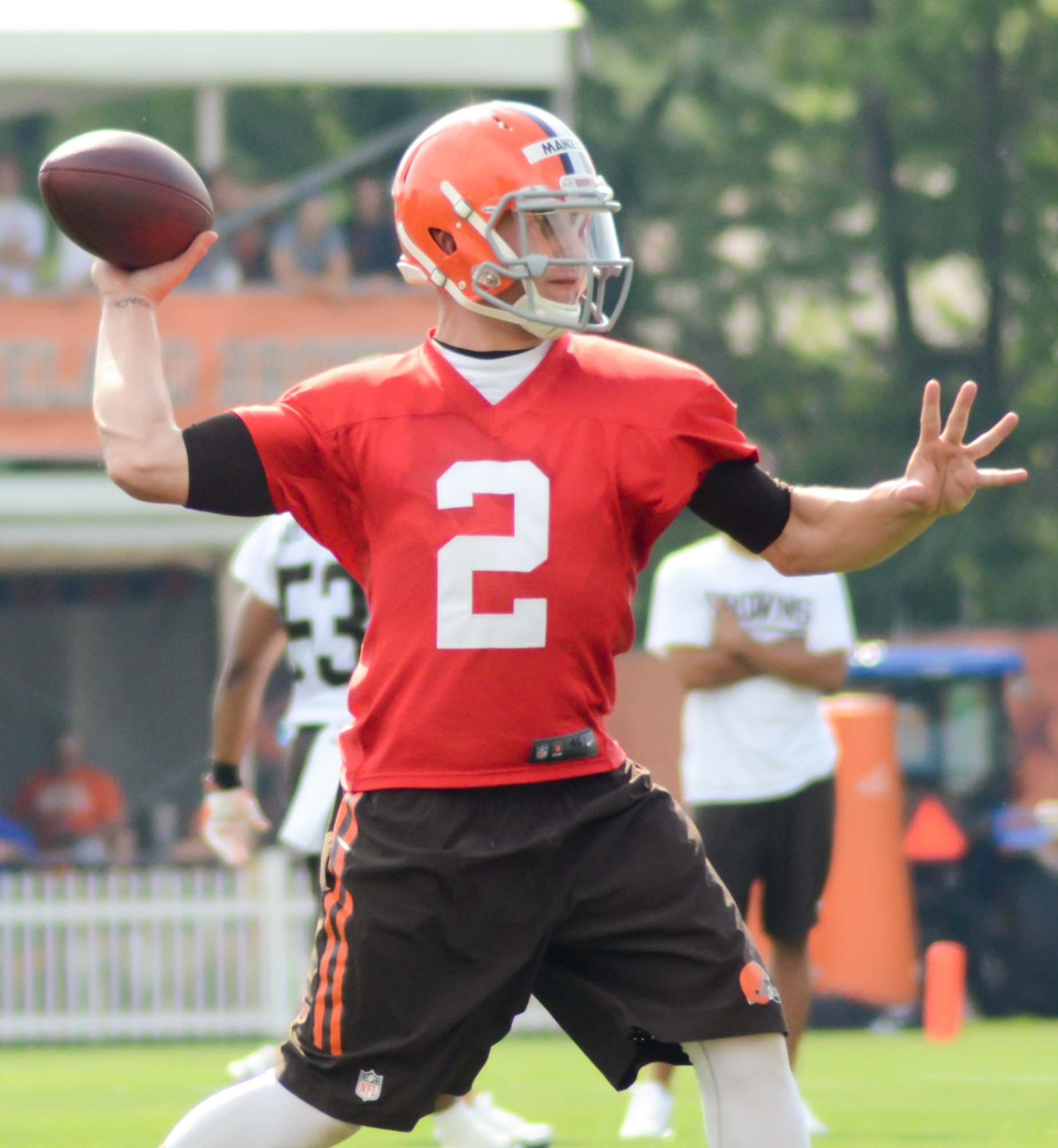 What happened to Johnny Manziel?

As the 2021 NFL Draft approaches, teams around the league are scrambling to piece together the final touches on their draft boards that will determine the future direction of their franchise.

Despite countless hours of scouting, teams far too often make the unfortunate mistake of investing millions into the wrong players.

As we have seen in years past, the NFL doesn’t always work out for everyone. For numerous reasons, certain individuals fail to find success while playing at the highest level.

Those who fall short of expectations despite being regarded as the best in their class, are forever remembered as busts, serving as cautionary tails for years to come.

As we welcome the first NFL Draft class of the new decade, let us take a moment to reflect back on the biggest misses of the last decade.

Leading up to the 2012 NFL Draft, it was well-known that Blackmon struggled with personal issues off the field. In fact, just one year prior to being drafted, Blackmon had already been arrested for DUI.

Was he worth the risk? The Jaguars certainly thought so and doubled down by trading up to get him at No. 5.

In his rookie season, Blackmon caught 64 receptions for 865 yards and 5 touchdowns. But just when things seemed to be looking up, Blackmon was hit with an NFL suspension for violating the league’s substance abuse policy. He returned for four games before violating the substance abuse policy yet again, resulting in an indefinite suspension from the league.

Blackmon’s multiple DUI arrests and suspensions ended what could have been a promising career in the NFL.

Back-to-back spots seem fitting for the Jaguars since they missed horribly on back-to-back drafts.

In the Jaguars’ defense, aside from Cam Newton, Andy Dalton, and Colin Kaepernick for a short stint, most of the 2011 quarterback class didn’t pan out. But the only thing worse than drafting a bust, is trading up to draft a bust. Jacksonville traded their 1st and 2nd round draft picks over to Washington to select Gabbert.

Gabbert repaid the favor by throwing 22 touchdowns and 24 interceptions, completing only 53% of his passes and winning four of his 27 starts as a Jacksonville Jaguar.

A string of injuries and lack of success finally had Gabbert traded to the 49ers for a sixth-round draft pick.

Since then, Gabbert has become quite the journeyman in the NFL, serving as a veteran backup for any team who comes calling his way.

Paxton Lynch was destined to be Peyton Manning’s successor in Denver, or at least that was what everyone believed after John Elway himself, traded up to handpick the quarterback.

The size, the athleticism and the arm, Paxton Lynch had everything physically, but the same could not be said mentally. Coming from a spread-style offense in Memphis, it was obvious Lynch would need some time to become the man in Denver. Plenty of opportunity came calling but Lynch never seemed to answer the call.

In his rookie year, Lynch failed to beat out former seventh-round draft pick, Trevor Siemian for the starting job. Lynch eventually made his way onto the field for Denver with four starts in which he threw for four touchdowns and four interceptions with a QBR of 24.9.

Lynch hit rock-bottom when he was leapfrogged by yet another seventh-round quarterback in Chad Kelly. Kelly was the 2017 NFL Draft Class’ Mr. Irrelevant, the the very last player taken in the draft at No. 253.

Lynch’s latest attempt at cracking a 53-man roster was cut short after he failed to beat out Steelers’ third string quarterback, Devlin Hodges.

Johnny Manziel was one of the most polarizing prospects coming out of college. Plenty of teams had concerns as to how well his production would translate to the next level. However, it was his character issues and extracurriculars off the field that had teams worried.

Cleveland took a chance and selected him with the No. 22 Overall pick in the 2014 NFL Draft. In a span of two short years, ‘Johnny Football’ partied his way out of the NFL. It wasn’t long before it was announced that the former Heisman Trophy winner had checked himself into rehab.

Manziel went 2-6 as a starter for the Browns. He threw for 1675 yards along with seven touchdowns and seven interceptions.

Years later, Manziel tried to jumpstart his football career in Canada. His career in the CFL ended abruptly after he was cut from his team and ultimately banned for violating an undisclosed agreement of terms.

Johnny Manziel will forever remain one of the most electrifying players in college football. Unfortunately, the same will never be said about his career in the NFL.

Calling Kevin White, a bust almost feels wrong. Why? Maybe because, unlike most NFL busts, White’s downfall as a pro was beyond his control.

In each of his first three years with the Bears, White found himself land on the team’s injured reserve list. After his third season, the Bears moved on from the former No. 7 Overall pick. White ended his injury-riddled time in Chicago with only 25 receptions and 285 yards.

Despite White’s recent attempts at jumpstarting his career, he is yet to find a home in the NFL and his first ever touchdown.

When drafted by a New York team, the expectations are always sky-high. For Milliner, expectations stretched far beyond the norm. Just four days before the 2013 NFL Draft, the Jets traded away their All-Pro corner in Darrell Revis. It became evident that Milliner would be his successor in Rex Ryan’s defense, but the pressure ate him alive. After just nine games into his rookie season, Milliner had already been sent to the bench three times.

He seemingly bounced back with a few interceptions and a couple passes defended late in his rookie season. Unfortunately, Milliner only went on to start in two more games after his rookie season. He became plagued with injuries that kept him off the field the very second it seemed he was ready to return.

In 2016, the Jets released their former first-round pick. Milliner never stepped foot on the field again.

Jake Locker is rarely mentioned when ranking the NFL’s biggest busts. That won’t be the case here.

Locker had a short and painful career in the NFL. In 23 starts with the Titans, Locker threw for 4967 yards, 27 touchdowns and 22 interceptions. He went 9-14 as a starter with a completion percentage of only 57.5.

To put things in simple terms, when he played football, he did so horribly. When he wasn’t playing, it was because he was injured. In a span of three years, Locker suffered six different injuries: right knee, hip, thumb, and wrist, along with left shoulder in two separate instances.

Just before hitting the open market in 2015, Locker announced his retirement from the NFL. Despite having interest from many teams around the league, Locker admitted that he no longer had a ‘burning desire’ to the play the game he loved.

Justin Gilbert has made his case for being the biggest bust in Browns’ history. Considering Cleveland’s numerous misses in the NFL Draft, Gilbert topping them all is awfully impressive.

Coming out of college, Gilbert was an athletic freak. His measurables at the NFL combine shot his draft stock through the roof, and it wasn’t long before he was considered a top-10 pick in the 2014 NFL Draft. Cleveland drafted him with the 8th overall pick after several questionable trades, to ultimately pair with their very own lockdown corner, Joe Haden.

Soon Cleveland realized drafting Gilbert was a mistake. Already struggling to pick up an NFL defense, Gilbert made matters worse by creating problems outside the locker room.

From late meetings to recklessness in his personal life, Gilbert paid the price with a lack of playing time, heavy criticism from teammates, and ultimately a trade that shipped him out of Cleveland.

Gilbert remains one of the biggest busts in modern NFL history, with only three starts and a pick-six to show for his three-year career in the league.

The Browns saw no issue with it and traded four picks over to the Vikings in exchange for a jump up a single spot to pick up Richardson at No. 3. The rookie running back went on to post an impressive first season as he rushed for almost 1,000 yards and 11 touchdowns.

Unfortunately, the same couldn’t be said for the coming year. After a shaky start to his second season, Cleveland agreed to trade Richardson over to the Colts in exchange for a 1st Round pick in the following draft. The Colts had intentions of fortifying their offense by adding Richardson, hoping that a change of scenery would help him replicate the success he had in his rookie season. Sadly, Richardson never came close.

Trent Richardson closed out a disappointing second-year campaign by averaging an abysmal 3.0 YPC, compiling only 563 yards and three touchdowns through the ground. He followed that up with yet another underwhelming season in which he rushed for 519 yards and another three touchdowns.

He was released from the Colts in 2014 and signed with the Raiders on a two-year deal worth up to $4 million. After failing to secure a spot on the final roster, he was cut before the season began.

Richardson was granted a second chance in 2016 when the Ravens showed interest in the former first-round pick. He went on to sign a one-year contract worth up to $675,000 with no guaranteed money. He once again failed to capitalize and was cut before taking a single snap for the team.

Trent Richardson became more than just one of the biggest busts in NFL history, he became a cautionary tale that teams around the league keep in mind as they make their first-round selection in every draft. Richardson’s story left a blemish on the idea of drafting a running back in the first round for many years after, ultimately leaving an impact that stretched far beyond others on this list.

Prior to the 2013 NFL Draft, Dion Jordan was thought to become the NFL’s next premier pass-rusher. Often compared to the likes of NFL great, Demarcus Ware, Jordan was anticipated by many to develop into a game-wrecking defender for the Dolphins for many years to come.

Unfortunately, Jordan’s career came far from producing anything near what had been expected for him. As he struggled to crack starting lineups, Jordan never became a worrying factor for opposing defenses.

During his time in Miami, the former first-round pick struggled with substance abuse. In his first three years in the NFL, he managed to rack up three suspensions for violating the league’s substance abuse policy. Three seemed to be Jordan’s unlucky number, as it was also the number of sacks he attained during his 26 games as a Miami Dolphin.

After being released by Miami, Jordan went on to play for three other teams, serving merely as a depth piece along the defensive lines.

Jordan is currently still in the league playing today. He continues to bounce around for any team that is willing to take him in. But what continues to be most baffling about his career to this point, is that in a span of 7 years, Jordan still only has 13.5 sacks to his name. Horrific, to say the least.

At this point in his career, it is not likely we see Jordan become the perennial pass-rusher we once thought he’d become. It is fair to say Dion Jordan remains one of the biggest busts of not only the last decade, but of all time.