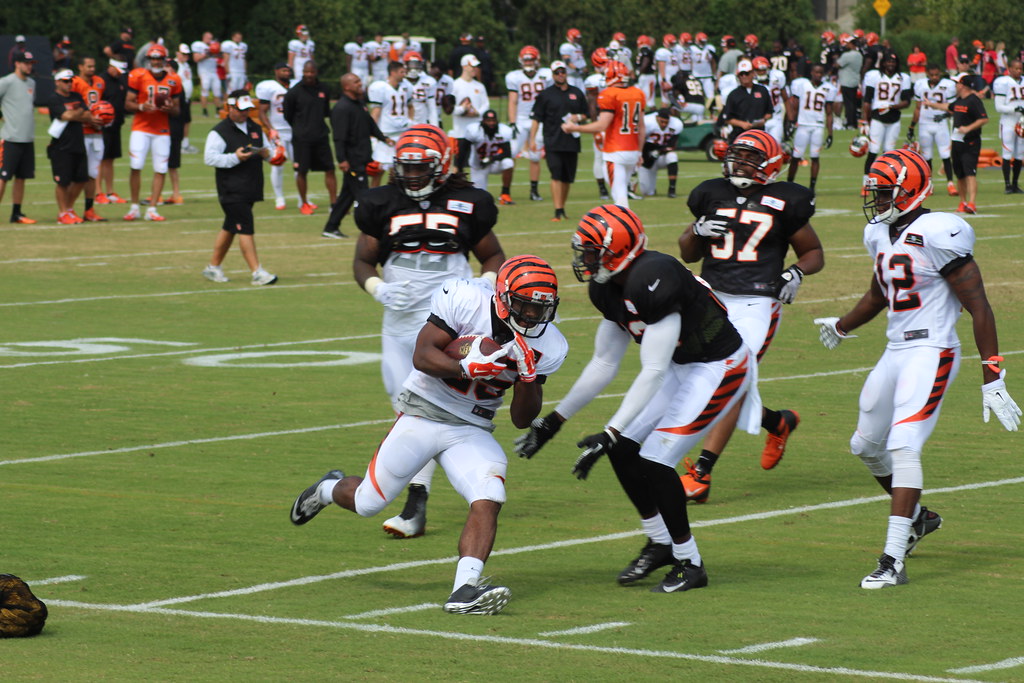 In the 2021 NFL Draft, the running back class is not so deep. In fact, there are really only three running backs that can be considered an every-down running back. After that…well, your best guess is as good as mine.

This is not to say that there are not any good running back options available beyond the first round. There are. But most of the options either won’t be there or have questions surrounding them. However, the Cincinnati Bengals pick at 38 and that means they will have a good shot at some of the best running backs in this draft class. So, who can the Bengals hope to see sitting at 38? And how realistic is it for those running backs to be there?

First, it’s important to remember that the Bengals already have a starter in the backfield in Joe Mixon. However, last year brought some real concerns to the table because Mixon could not stay on the field and only played six games. The Bengals will want someone more reliable than that to help Joe Burrow. But, there is still a chance that the Bengals do not take a running back, instead of hoping that Mixon will remain healthy for (most of) the season.

Most draft analysts regard Harris as the best running back in this class. At 23 years old he is a mature running back but probably won’t play beyond his first contract. Quick, explosive, and a deadly weapon in the passing game, the Bengals would love to add him to their rushing attack. However, there is little chance that he is still sitting there at pick 38. The reports are that the rival Pittsburgh Steelers are big on Harris and will probably pick him at 24 if he is there. The Miami Dolphins and New York Jets also present threats and both could take a running back, whether in the first round at 18 and 23. respectively, or at 33 and 34. I don’t think there is any chance that Harris escapes round one, but there is a chance that he does. The two ways that happen is if other players fall that teams can’t pass up, or teams don’t draft him because they believe running backs should not be taken in the first round. Either way, Bengals fans hopes for Harris are slim.

Williams probably has the best chance to be available for the Bengals at 38. If you are a Bengals fan and have not seen his highlights, go watch them. He is my favorite running back in this class. Essentially a smaller, faster, version of Harris, Williams is only 21 years old so he has lots of tread loft on his tires. He also shared the backfield at UNC with Michael Carter, and had 366 career carries. For reference, Harris had 560 in the past two years. Williams is also a fantastic pass-blocking running back, which is something the Bengals want to ensure Joe Burrow stays healthy. Williams has the best shot out of the top three running backs to land with the Bengals at 38, but there is no chance he falls out of the second round.

The fastest and the most productive out of the top three running backs, Etienne is not for some people. He doesn’t have the build of a between-the-tackles runner, weighing in at 210 pounds. But after he ran a 4.41 40-yard dash at this pro day, he proved that what he lacks in build, he makes up for in speed. He can take it to the house from anywhere on the field. There are concerns about his ability to be an every-down back, but if the Bengals are looking for the next Alvin Kamara, Etienne is their best shot. There are rumor’s that the Buffalo Bills are looking to trade up for Etienne. If this is true, then Etienne has no chance of falling to the Bengals pick at 38. I would put his chances of being available when the Bengals pick at about 50%.

Other Round Two Options

A small, but adept, receiving back out of Memphis, Gainwell offers a lot as a complementary back. A converted wide receiver, Gainwell is a natural receiver and runs routes like a wide receiver. His only problem is that he is too small to be a lead back, at 5″11, 194 pounds. He also is not great at pass protection. But the Bengals did just cut Giovanni Bernard and could be looking to add a younger, more explosive, receiving back. Gainwell will be there at pick 38 and has a good chance of being available when the Bengals pick in the third round. If the Bengals were to add a running back, Gainwell and the next running back on this list would be my best bet.

Carter is very much like Gainwell. Small, (5″9, 200 pounds), and explosive. Carter is not that much different from Gainwell, except for the height and the weight difference. Carter has shown a good ability to bounce off tackles and has the vision to pair with it. He is also an excellent receiver. Honestly, if the Bengals are looking to add a receiving back, they should just select Carter or Gainwell in the third round. If only one is available, take him. If both are, whoever’s tape they prefer. I think that Gainwell has shown a little more potential as a receiver, but Carter offers more as a between-the-tackles runner because of his build and weight.

Most Realistic option at 38: Javonte Williams

Best option at 69: Kenneth Gainwell or Michael Carter. Notice that I didn’t say dream option? Because there is no way that any of the top three fall that far, and these two have a very realistic chance of being available.

And with the 69th pick in the 2021 NFL draft, the Cincinnati Bengals select…Michael Carter, Running Back, North Carolina. Carter has a great chance of being available in the third round for the Bengals. He takes Bernard’s place as the receiving back, offers a little something running downhill, and if necessary, can take on 3-down duties if Joe Mixon is hurt. If the Bengals want complete insurance from a Mixon injury then they should take Williams at 38. However, I think they will be better off taking an Offensive Tackle to help Burrow, then adding a back, rather than the other way around.