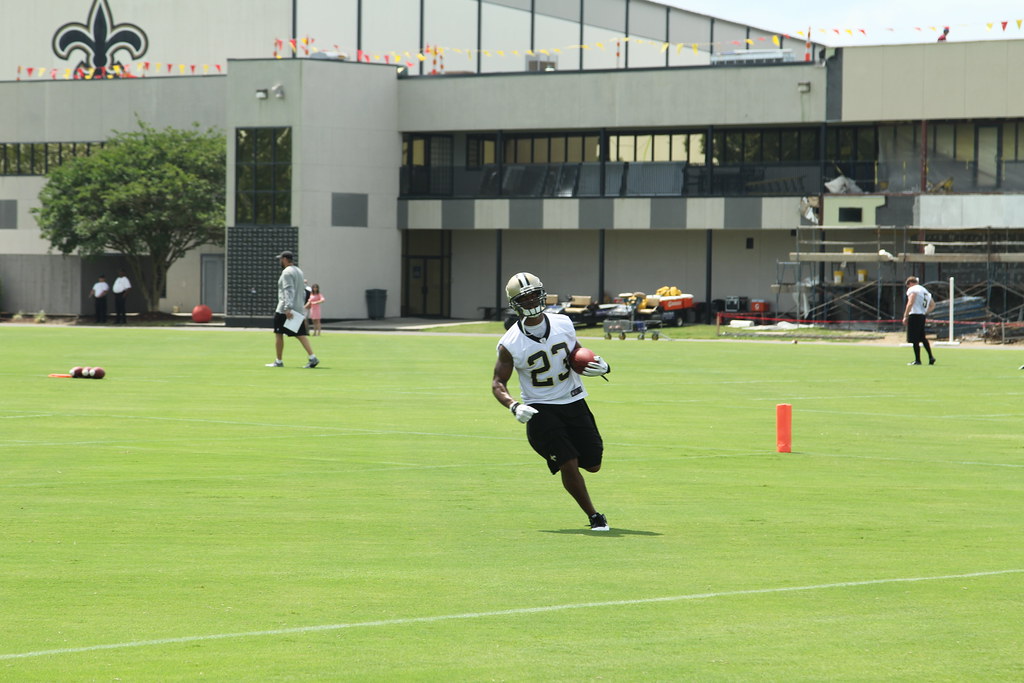 A comprehensive rundown on the newest draftees of the New Orleans Saints.

Cleveland Ohio played host to the 2021 NFL draft which was held Thursday, April 29th through Monday, May 1st in front of a ~live~ audience for the first time since 2019.   Many eyes were on the New Orleans Saints this year to see how they would patch up one of the biggest offseason overhauls the team has seen in years.

Let’s take a look at the 6 new selections headed to New Orleans and what Saints fans can expect from them when the 2021 season starts in September.

Turner recorded 10.5 tackles for loss, and 5 sacks in only 5 games in 2020 for the Cougars.  A small sample size but numbers that exceed his totals in those categories in 12 games played in 2019.

Turner is extremely athletic for his size and is a physical, overwhelmingly powerful pass rusher. His length and strength fit the mold perfectly of what Sean Payton, Mickey Loomis, and Jeff Ireland have looked for historically in defensive ends as evidenced by their past first round selections of Cam Jordan and Marcus Davenport.

His flatline and closing speed won’t impress anyone, but his agility and twitch off the line makes him stand out in a big way. He turns his hips with no problem helping him adjust to cuts and to make open-field tackles that not many ends his size can.

Turner plays upright and with a narrow base which can cause him to get leveraged easily at times.  He also needs to develop his repertoire of moves off the line, as his rush can stall if he is overpowered or his agility on its own can’t get him through.

The 22-year old’s hand skills leave a little to be desired, but he has steadily shown improvement in the area over his 3 years starting in Houston.

Turner’s selection caused many in the Saints fanbase to scratch their heads, seeing as there were a few other areas that seemingly needed more urgent attention.  According to reports, the Saints tried to trade much further up, reportedly for a cornerback or one of the top quarterbacks, but the 28th pick owned by New Orleans was too far back to garner much interest.

In a vacuum, however, the Saints have much to look forward to with Turner, who has a prototypical build and is oozing with untapped potential and room to grow, not to mention his exceptional motor and will to never give up on plays.

One AFC scouting director stated: “I wanted to keep him a secret after I saw him last year and that didn’t happen. He’s going to be a force.”

The Saints went back to the well in Columbus in the 2nd with this 2020 all-BIG10 and Butkus award finalist. Werner led the Buckeyes with 54 tackles, 2.5 of those for loss, one sack, and 2 forced fumbles in 2020

Like Turner, Werner’s size fits the mold for what the Saints look for at the linebacker position, and his coverage abilities were surely another enticing trait for New Orleans.

Werner is a physical tackler once locked on to his target, and has experience playing all three linebacker positions.

Again, similar to Turner however, Werner’s slender lower body and high center of gravity can make him vulnerable to angled blocks and works against him sometimes in finishing tackles against strong runners.

Werner will more than likely be competing with last year’s 3rd round pick Zack Baun for the second starting spot alongside Demario Davis, barring any post-draft free agent signings.

A thunderous “FINALLY!” could be heard by the attendants of the draft in Cleveland all the way from the Bayou State.

Not really, but what was seen by many as the biggest need for the Saints going into the draft was certainly a welcome sight to finally see be addressed.  But is Adebo the shoe-in day 1 starter opposite Marshon Lattimore?

Adebo led the FBS in 2018 with 24 pass breakups as a freshman and was immediately crowned a future no-brainer first rounder.

But if his down 2019 season sent him to the 2nd, his decision not to play in 2020 may have been what sent him to New Orleans in the 3rd this year.

I may sound like a broken record, but again, if you told Sean Payton to sculpt his image of the ideal build for a corner, you would get Paulson Adebo.

Adebo’s above average size for the position helps him jam receivers at the line and put them off balance and make them uncomfortable immediately.

The former highschool star wide receiver has elite ball skills and an instinct to play the ball rather than the man. Adebo is also great at identifying and timing routes due to his receiver background.

Adebo struggles against double moves and more complex routes and has a tendency to give up big plays, something that will have to be addressed immediately in camp, especially since he will be lining up across probably the best group of #2 wide receivers in the NFL in Calvin Ridley, Chris Godwin/Antonio Brown, and Robby Anderson 6 times a year.

He possesses good makeup speed however and is a strong and willing tackler.  If Adeebo can limit the big plays, there’s no reason to believe he can’t be a serviceable counterpart to Lattimore in his debut season.

In the process Book became the all-time winningest quarterback in Notre Dame history (30-5) and finished 2nd behind Brady Quinn in career passing yards.

Book moves around the pocket very well and can be a slippery runner when the pocket breaks down.  He also possesses excellent footwork in run-pass options and sells his play-action fakes well.

The 2-time team captain is also heralded for hanging tough and completing throws when he knows he’s going to be hit afterward.   Book throws the ball with nice touch and catchability for his receivers.

He also has big-game experience and is heralded by his teammates for being a great leader, a quality that can often be overlooked when discussing rookies.

While Book’s intangibles and leadership can’t be ignored, he currently doesn’t possess the arm strength to make all the throws at the professional level and does not throw the ball well at all outside the numbers.

Book can also be indecisive and slow going through his reads at times.

As of now, Book is more of a project that Sean Payton was willing to take a stab at to see what they may do with him to mold him into a more capable pro.

He possesses NFL size and has great toughness and also has a background in track and field (discus, shot-put) and wrestling which could provide him with unique skills that translate to the position.

Young is an average athlete who primarily plays tackle but is versatile enough to slide to guard if need be.

He has some habits that will need to be rectified if he hopes to carve out a role beyond a camp body in the NFL, such as bending at the waist and the tendency to pop upright and lose leverage on swing and cut off blocks.

Baker recorded 51 receptions good for 659 yards and 8 touchdowns in 10 games in 2020 with the Jaguars, good enough for 2nd-team all-Sunbelt Conference honors.

With good size for the amount of burst and speed he has, Baker has a chance to be one of the sleepers of this draft class.

A versatile receiver that can play inside or outside, Baker prospects as a big slot receiver due to his yards after the catch ability, but definitely has the versatility to line out wide and stretch the field when called to do so.

Baker’s hands are inconsistent, and he hasn’t played many NFL caliber corners in his career, so the learning curve will be sharp at first.  But he has the tools to surprise a lot of people and carve out a nice role in Sean Payton’s offense.

Does Trey Lance have the best rookie situation?
What happened in baseball last night 5/5
wpDiscuz
0
0
Would love your thoughts, please comment.x
()
x
| Reply