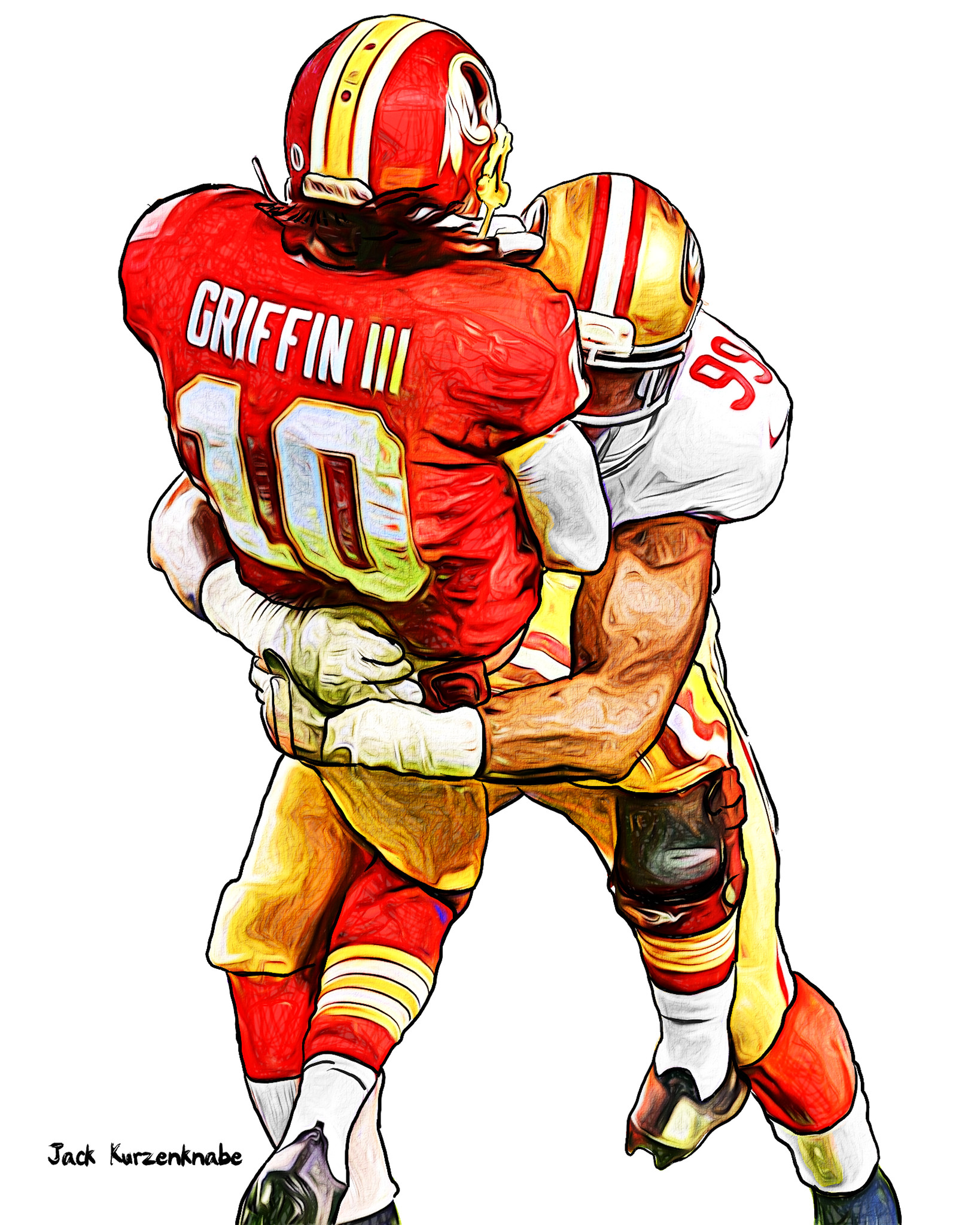 What happened to RG3?

The 2021 NFL Draft saw five quarterbacks go in the first round. This is due in part to that position being considered one of the most important for the success of an NFL franchise.  We’ll look back at this draft class in the future and have conversations about which teams got it right with their quarterback pick.

One draft class that’s looked back on quite a bit, for quarterbacks, is the 2012 class.  This group included number one overall pick Andrew Luck, third round pick and Super Bowl champion Russell Wilson, another third rounder and Super Bowl champion Nick Foles, as well the talented veteran starters in Kirk Cousins and Ryan Tannehill.  Even undrafted Case Keenum has had a serviceable career in the NFL.

The one name not mentioned in the list above was actually the quarterback that was named the 2012 Offensive Rookie of the Year, Robert Griffin III.  RGIII took the league by storm his rookie year in Washington and had many debating if he should have been the number one overall pick, over Andrew Luck.

The shine on Griffin didn’t last much beyond his rookie season, so I wanted to take a look at the top three reasons for Robert Griffin III’s decline.

RGIII was never able to gain that rookie form again.  He was struggling in the 2013 season and that ultimately led to head coach, Mike Shanahan, allowing Kirk Cousins to start the final three games, (in order to avoid injuries to Griffin) with Washington already being eliminated from the playoffs that year.  Griffin would also dislocate his left ankle during the season opener in 2014, against the Jacksonville Jaguars.

2.Team Environment – One aspect that I think went overlooked in the Griffin decline was team environment. Many felt that Washington needed to move on from head coach Mike Shanahan, which led to the hiring of Jay Gruden in 2014.  Gruden had proven himself as an offensive minded coach in the Arena League, as well as in Cincinnati as offensive coordinator of the Bengals.  Many felt that Gruden’s scheme was never a fit for Griffin and was more centered around the talents of Kirk Cousins, who has similar mechanics and pocket presence of Bengals QB Andy Dalton.  Mike Shanahan’s scheme wasn’t all that complicated to many, and Griffin was able to easily pick up on the zone-read option and heavy dose of plays designed to the “X” wide receiver.  Gruden brought in a lot of different personnel packages and route combinations that RGIII was never able to adapt to, as it didn’t fit into the quarterback that he was.

Griffin also didn’t necessarily have the offensive talent surrounding him.  The oft injured Jordan Reed didn’t have his breakout season until 2015, when Kirk Cousins had already been given the keys in Washington.  Alfred Morris broke out with Griffin in 2012 rushing for over 1,600 yards and 13 touchdowns, under the Mike Shanahan scheme.  He would rush for over 1,000 yards three straight seasons though declining each year leading up to 2015, where he only rushed for 751 yards and a touchdown.  You then toss in some of the dysfunction and scandals that have been reported out of Washington with owner Dan Snyder, former GM Bruce Allen, and even photos of former head coach Jay Gruden himself enjoying the nightlife a little too much and you have to believe the team environment played a part in Griffin’s decline.

3. Pride – I want to start this by saying I can’t speak to Griffin’s character.  I wasn’t there and Robert Griffin III has always come off as a humble and well-spoken individual.  However, I believe pride impacts us all.  We all have moments in life where we feel a great deal of satisfaction in our own achievements and accomplishments.  This isn’t a bad thing.  We should 100% celebrate the wins in our lives, as they can be few and far between, but we can’t allow those to change us as a person.  It would be extremely hard as a young man coming out of college to be thrown into the spotlight of the NFL.  Many of your dreams as a child are now fulfilled in one moment.  We’re talking individuals that often come from very little, fighting and clawing their way to something.  Something better for themselves.  Something better for their family.  A life they never truly knew could be a reality…and that’s simply making it to the NFL.  When you then toss in first year success, after already breaking so many barriers, and the sky’s the limit.  You’re the man.  You’re the franchise.  You now have family, friends, teammates, coaches, agents, and endorsement companies all in your ear about who you are and what you can become.

For anyone, that would be something to feel prideful about and I believe that pride may have gotten to Robert Griffin III.  I feel pride led him to rush back from major injuries before he was ready.  I’m sure the organization played a big part of this too, but as an athlete you need to ensure you do what’s best for yourself, family and your own career first.  Something that I think athletes today do a better job of and receive a lot of scrutiny for.  I think pride also led RGIII to believe he was bigger than the team at times.  He thought he was more polished in the pocket than he was.  He felt he was the main reason for the franchise’s success.  A former teammate and NFL wide receiver, Santana Moss, had an interesting quote to a reporter back in 2014 when he said, “No one who ever played this game can do it on their own or can’t be helped by good coaching.  I know everything this game gave to me I got because of what I did and what my coaches and teammates did to help me.  And no matter how much talent you have, it can change quick in this game.  You gotta know that.  You gotta remember that.”

I think that’s something we all can remember in our own lives.  None of us are bigger and better than those that helped us get to where we are along the way.  All of the major accomplishments in our lives aren’t just because of us as individuals.  It’s about who helped us along the way.  Who kept pushing us to keep trying?  Who helped us along the way when we stumbled?  Who encouraged us to keep fighting towards our goals?  Who cheered for us through ups and downs?  Pride often leads to us forgetting those people and focusing solely on ourselves.  I, personally, feel that played a part in the decline of Robert Griffin III.

The good news for him is that he has still been able to live out his dreams beyond Washington, spending the last few seasons with the Baltimore Ravens before being waived in January of this year.  I truly hope his time was well spent in Baltimore, as they have a franchise quarterback themselves, to whom RGIII should have been the perfect mentor for…as long as he didn’t let his pride get in the way.

Patrick Mahomes’s quest to be the greatest
Was Luke Kuechly or Patrick Willis the more dominant lb?
wpDiscuz
0
0
Would love your thoughts, please comment.x
()
x
| Reply