NFL in London is back! international series returns 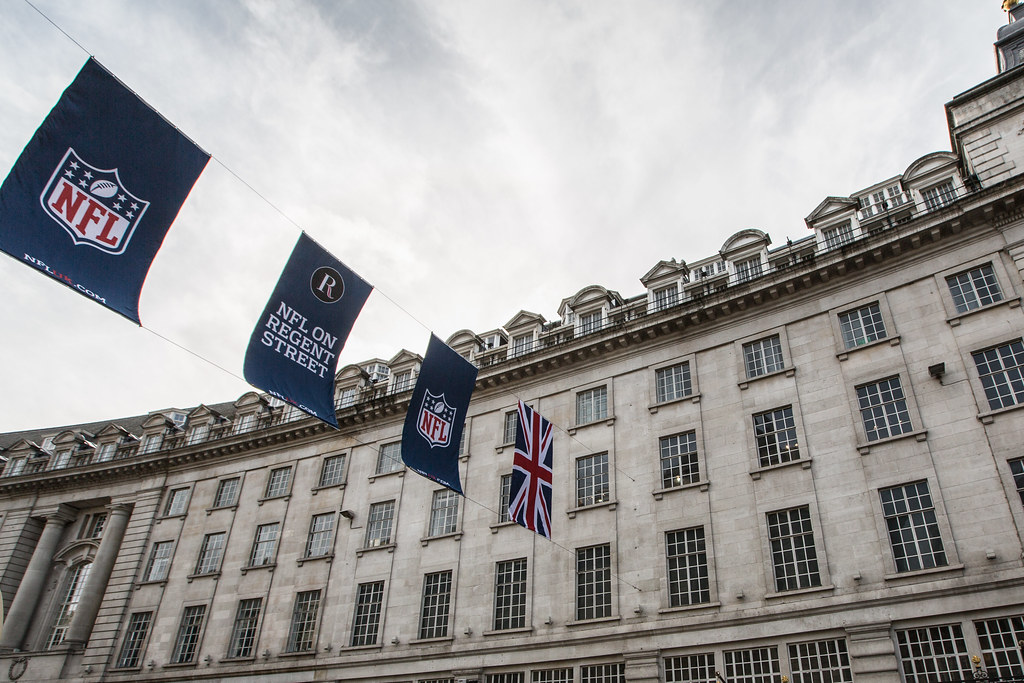 London NFL games will return in 2021

Two games have been announced for 2021, with COVID-19 protocols likely to take place for both these games. The Atlanta Falcons will host the New York Jets in the first game on 10th October before the Jacksonville Jaguars are at home against the Miami Dolphins. Both these games will be played at the Tottenham Hotspur Stadium. Fans of the UK are over the moon to have the London games back.

The NFL journey in the UK initially started in the 1980’s, with the Channel 4 coverage offering something to British sports fans that they had not seen before. To a nation that is used to our version of football, rugby and cricket, the NFL was something that British fans took to like a duck to water. There would be weekly highlights of games, but not every team were shown. Therefore fans in the UK gravitated towards the good teams, such as the San Francisco 49ers, Chicago Bears and Washington. Players such as William Perry, Joe Montana, Dan Marino and Joe Thiesmann were just a few of the big name players that drew British fans to their respective teams.

However, this phenomenon in the UK would take a downward trajectory, with the television coverage eventually coming to an end. NFL Europe was introduced in the early 90s but would come to an end in the mid 2000’s after money issues. This saw the state of the sport in Britain in some disarray. Sky Sports started their NFL coverage in 1995 and secured a long-term deal in 2006. A year later, the NFL in London was announced and the rest is history.

Alistair Kirkwood, who played a big part in bringing the NFL to Britain, spoke of the process.

“With that TV deal, New York saw the UK as a potential big market. Wembley was being built and we positioned it as launching the new national stadium. There was a belief that the UK could be the right market. We were told if the game was played successfully, we could have another London game in four years’ time. We just accepted it and said let’s do it”.

In February 2007, it was announced that the Miami Dolphins and New York Giants would play in the first ever NFL regular season game to be played in Europe, the second ever in the world after Mexico hosted the Arizona Cardinals and 49ers.

“The international popularity of the NFL grows every year. That interest will be seen as the far corners of the world watch Super Bowl this Sunday. That is a fascination we will build upon. London and its international stature adds to the impact of the game”, new NFL commissioner Roger Goodell stated when the game was announced.

The game was met with hesitation, with Brits seen by America as having no knowledge of the sport and gaining interest to sell tickets was a potential issue. This was soon quashed, with 500,000 fans registering interest within the first 24 hours. Whilst the Giants vs Dolphins game finished a disappointing 13-10, this kick-started affairs.

There had been initially just one game a year in London but as the years have gone on, more and more have been added. 2013 saw one game move to two and 2014 saw three live games before COVID-19 brought an end to the thirteen consecutive years of the NFL International Series in 2020. In 2019, the last year to see the NFL in the UK, there were four games played.

The Bears and Oakland Raiders played at the inaugural NFL game at the newly build Tottenham Hotspur Stadium, before the Carolina Panthers and Tampa Bay Buccaneers played in the same arena one week later. The Cincinnati Bengals and Los Angeles Rams played at Wembley before the Houston Texans beat the Jacksonville Jaguars seven days later.

31 of the 32 teams have played a game in London, with the one exception being the Green Bay Packers. Things may be about to change, with European NFL fans likely to finally see them play. There will now be a 17-game season and there will be at least four games a year played overseas. Two will be played in London at the Tottenham Stadium, one in Mexico and one in Germany. There is also the potential for teams to play additional games outside the US, which would allow the Jaguars to continue their status as ”˜London’s team’.

Over the years, there have been some memorable moments in the UK. We have seen the New Orleans Saints beat the San Diego Chargers 37-32 in 2008, the Detroit Lions come from 21-0 down at halftime to beat the Atlanta Falcons 22-21 in 2014, the Buffalo Bills and Jaguars play out a thrilling 34-31 encounter in 2015 and a tie between the Bengals and Washington in 2016.

From Matt Forte’s 32-yard rushing touchdown run in 2011, Adrian Peterson running for a 60 yard touchdown in 2013 and Landon Collins’ pick 6 in 2016, there have also been some great individual moments. Arguably, the biggest highlight is seeing the first ever NFL-purpose built stadium outside of the United States.

The Tottenham Hotspur Stadium signed a nine-year deal with the NFL but has unfortunately seen delays in the opening of the stadium and COVID-19 limit the stadium to just two games so far. The long-term goal means we will soon see many more games across the years at the stadium.

Where can the game go across the pond? Unlike in the 1980’s, there seems to be a genuine plan in place for the growth of the game and there are no signs of this slowing down. Talks of a London franchise increase with every year that passes by. With every year, the UK is gaining more and more fans and British fan’s knowledge of the game is at an all-time high. The sky is the limit for the NFL in the UK, with the hosting of a Super Bowl in London not beyond the realms of possibility.

Is Andrew Luck Hall of Fame worthy?
Fantasy: 3 WRs you are sleeping on in 2021
wpDiscuz
0
0
Would love your thoughts, please comment.x
()
x
| Reply