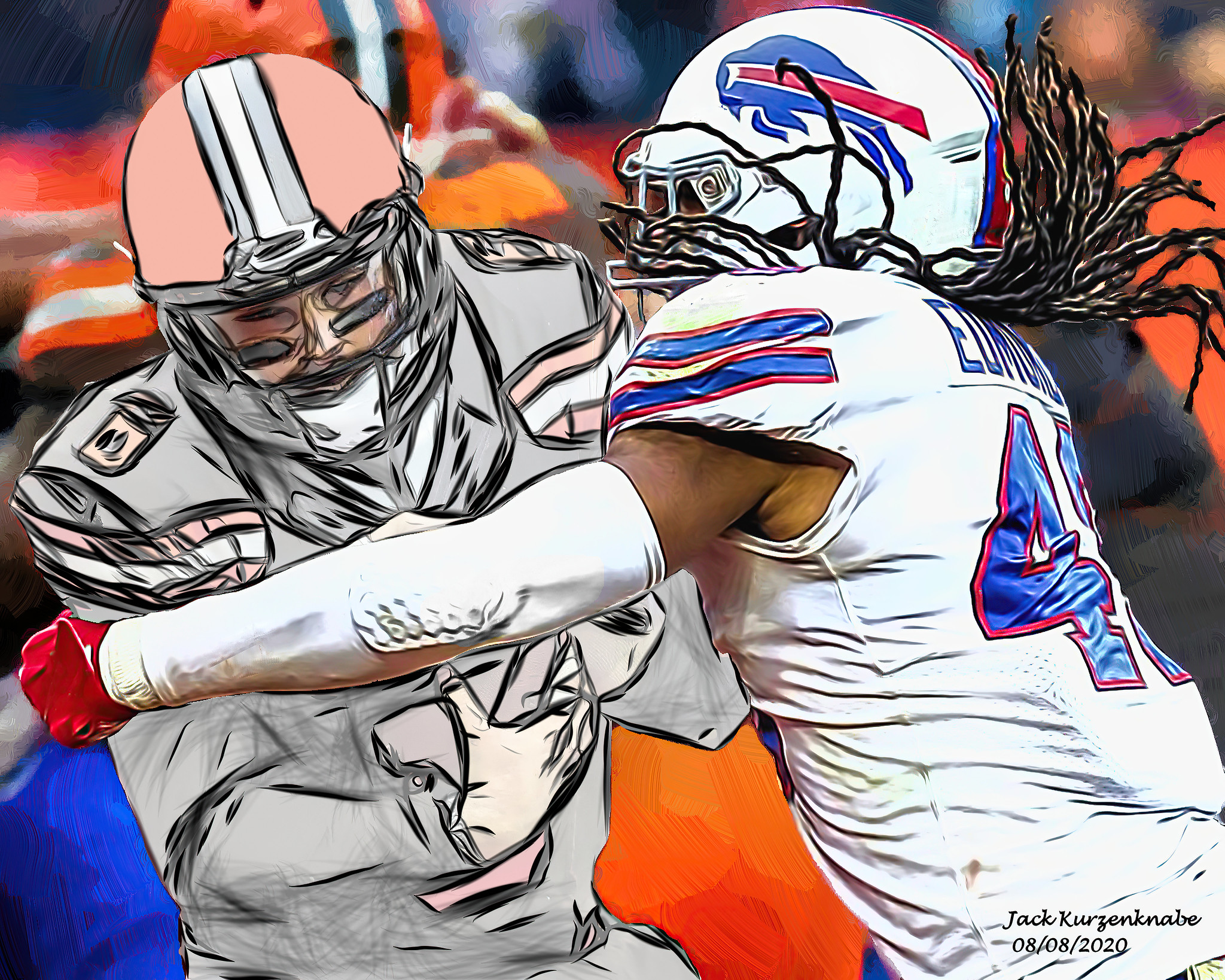 Which Bills really need to stand out in 2021?

Buffalo is in a prime position to make a run and potentially overtake the Kansas City Chiefs as AFC Champions. After a successful offseason where we saw Brandon Beane address both the offensive and defensive line in the draft and free agency the Bills look to make another jump forward after a successful 2020 campaign. If the Bills want to make that run it is necessary, that some role players step up their game and start to have a major impact every single week. Buffalo has a very young roster in terms of a contender so many of the players they will need to step up have only been in the NFL for a couple of seasons. Not only will these players need to step up for the Bills, but they also have to prove to the organization that they are worthy of keeping in the coming years. These are the three players that have the most to prove for the Buffalo Bills in 2021.

Tremaine Edmunds has manned the middle linebacker spot ever since he was drafted in the same round as franchise quarterback Josh Allen. Edmunds has had an up and down career in his three seasons with Buffalo. Still only 23 years old there has always been an extremely high ceiling for Edmunds since he was picked. Totaling 335 career tackles, and 19 tackles for loss Edmunds has been the anchor of a Bills defense that was elite in 2019 allowing the 2nd least points in the NFL. However, in 2020, Edmunds took a small step back alongside the rest of Buffalo’s defense. Edmunds struggled mightily in run defense causing Buffalo to allow the 7th most yards per carry in the NFL. Edmunds struggled to shed blockers and often either failed to attack the hole or over pursued the running play. Part of this was due to a shoulder injury that Edmunds sustained early in the season as well as the small defensive line that Buffalo had after the losses of Shaq Lawson, Jordan Phillips, and Star Lotulelei who were all oversized lineman that manned a solid run defense.

Edmunds has a lot to prove because the Bills already picked up his 5th-year option for next season. That option will make Edmunds the 5th highest-paid middle linebacker in the NFL per Spotrac. Edmunds has to not only prove his worth to Buffalo to earn a potential long-term deal after 2022 but also has to prove that he can bounce back from a poor season and get back on the right developmental track. Edmunds is a very unique linebacker in terms of age and physical tools so even if he does not become an All-Pro level linebacker as long as he takes a step back in the right direction, he will have proved his worth.

Part of the reason that Edmunds has so much to prove in 2021 is that if he is unable to improve on last season not only will it cast serious doubt about his future with Buffalo but will also make his 2022 salary a burden. Edmunds can easily turn around his career after one slightly down year, but he has pressure on him considering he is the quarterback of the defense, and his first two seasons of play built high expectations for his future.

As a rookie AJ Epenesa could barely get on the field. Epenesa registered only 27% of defensive snaps for Buffalo which is much less than many expected the Bills 2020 second-round pick to play. Part of the reason Epenesa played so little was that he was unable to experience a normal offseason. All of last year’s rookie camps and OTAs were canceled because of COVID-19. Epenesa also came into the season underweight. Buffalo had asked him to cut some weight before training camp, but Epenesa cut two much coming into camp very lean.

Epenesa has a lot to prove in 2021 because he essentially proved nothing in 2020. While he did show some occasional flashes, it was not nearly enough to rely on him in 2021. Epenesa needs to show really solid improvement because both Jerry Hughes and Mario Addison are on the wrong side of 32 years old. Epenesa should be in line for more snaps this season and needs to make the most of them. Luckily, just in OTA’s Epenesa has received some solid reviews.

Another reason the Epenesa has a lot to prove this season is because Buffalo drafted defensive ends in rounds one and two in the 2021 NFL Draft. If Epenesa cannot prove his worth this season he could easily fall behind both Carlos Basham and Greg Rousseau on the Bills depth chart or even further and be in jeopardy of being let, go before or after his rookie deal ends. Epenesa has pressure from all directions. He has high expectations because he is a second-round pick who showed very little impact in his first year and while there may be good reasons for that Epenesa does not have much time to right the ship as the Bills have Basham and Rousseau waiting in the ranks.

Ed Oliver his to prove his value in year three. A former top ten pick that has never completely lived up to the hype is a very good player just like Tremaine Edmunds. However, just like Edmunds, Oliver does leave a lot to be desired. Oliver is good but has shown he can be much more than just good. Oliver just struggles to show that consistently. Just like Edmunds the shuffling of the defensive line from 2019 to 2020 could have negatively affected the play of Oliver. However, this season he gets his partner Star Lotulelei back. That means that Oliver can slide back to his normal position and Lotulelei can resume his role as the 1-tech defensive tackle for Buffalo. Oliver struggled with the adjustment of his position last season and described the adjustment here.

Despite starting nine more games in 2020 than 2019 Oliver saw a drop off in his play.

While the drop of was not dramatic it was concerning that Oliver took a step back after showing his rookie year that he had the potential to be one of the most disruptive defensive linemen in the NFL. Oliver finally gets to return to the position where he is most comfortable. Oliver has to capitalize this season for Buffalo because Buffalo has been desperate for a complete game-changer along the defensive line ever since the All-Pro season that Marcell Dareus put together in 2014.

Oliver not only needs to be better and prove his potential for the sake of Buffalo but also for the sake of his career. This offseason the Bills have to decide if they are going to pick up Oliver’s 5th-year option which will come at no small price tag. As of now Oliver probably has not shown enough to warrant that option being picked up. However, if Oliver can put together his best season yet both Buffalo and him will benefit. Although it is not necessarily a contract year for Oliver it nearly is because of the 5th year option. His play this season will determine if he gets to make upwards of 10 million dollars in his 5th season.

All of these players have different and similar reasons why they have the stuff to prove in 2021. However, if the Bills want to be extremely successful this season and challenge for a super bowl these three players will all have to play much better than they did last season. While Oliver and Edmunds have significant experience and solid play the flashes, they have shown call for greater expectations for both players. If neither Edmunds nor Oliver can come near those expectations this coming season the Buffalo Bills may be in a tough spot next offseason. Lastly, AJ Epenesa seems like a product of a COVID-ridden offseason and the learning curve of the NFL. Epenesa likely would not be on this list if the Bills had not drafted two players who can easily take over Epenesa on the roster if he does not perform. Because of the increased competition at the defensive end, Epenesa has to improve and show value because the clock is ticking.