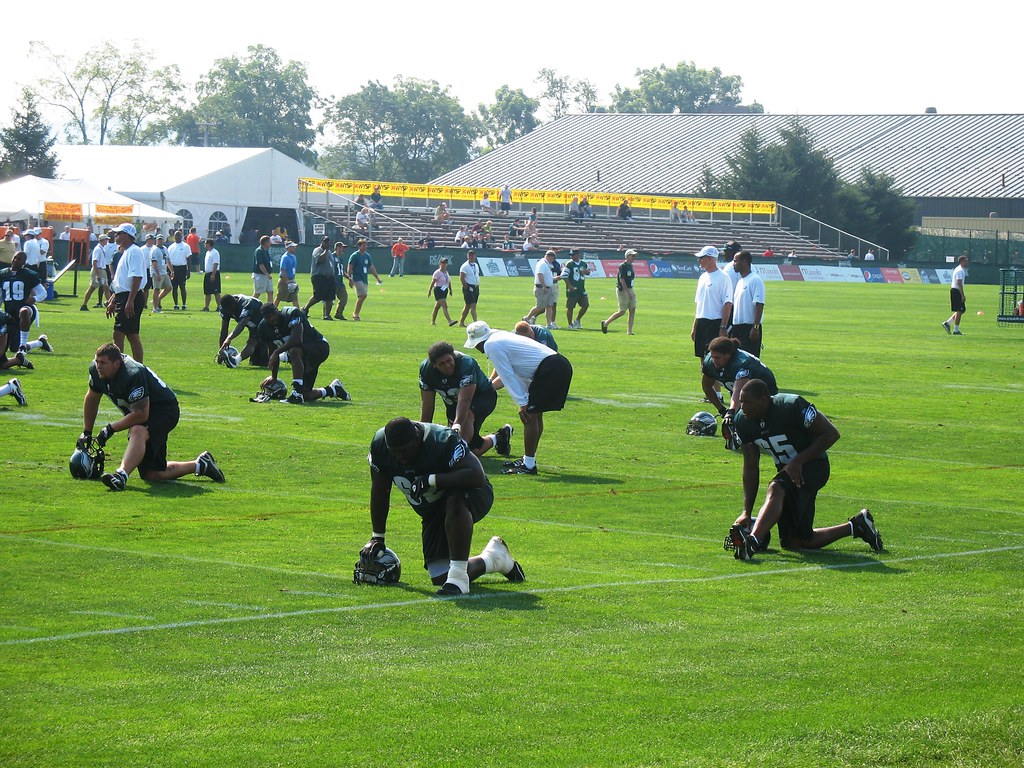 Who is the Eagles left tackle for the future?

The Philadelphia Eagles are in a peculiar situation regarding their left tackle position. For years left tackle was never in question in Philadelphia. For nearly a decade, Jason Peters gave the Eagles hall of fame caliber play on the left side of the line. That was last decade though, and the Eagles have a big decision to make for their franchise moving into the 2020s. Who will be the guy that will hopefully be protecting Jalen Hurts for the foreseeable future? Luckily the Eagles have a candidate for the job, in fact they have two, and it will be the highlight of camp to see who wins out the job.

If you asked any Eagles fan after 2019 who was the franchise tackle moving forward, almost all would say first-round pick, Andre Dillard. The Washington State product was drafted with the 22nd overall pick by the Eagles with the intention of taking over the blindside blocking position for Peters. It hasn’t worked out quite as fans would’ve hoped two years removed from that draft in Nashville. Dillard was thrown into the fire for five games during his rookie season, and he struggled a good amount early on. In his first real bit of action against Minnesota, the rookie Dillard struggled mightily, giving up nine total pressures. There were some promising moments, including a really good performance against Khalil Mack and the Chicago Bears.

Fans were hoping to see Dillard take that next step in 2020, but a torn bicep ended the sophomore season before it even started. In his stead, a new rising young star emerged at left tackle from an unlikely source. Shocking fans around the league, former rugby player and 7th round pick Jordan Mailata made the most of his opportunities at left tackle. On an offensive line struggling to do anything right, the 23-year-old Aussie was one of the few bright spots. Despite having no football experience prior to his rookie year, Mailata has made incredible strides as a player. His performance, combined with his great athleticism and young age has muddied the waters a bit on the left tackle position moving forward. Dillard was a promising first-round pick, but the team has no idea how good he is, even though he will be turning 26 this season. The left tackle position is one to keep an eye on all preseason.

Which wide receiver is on the chopping block?

The Eagles have pretty much two certainties in their wide receiver room. First round picks Devonta Smith and Jalen Reagor are locks to make the roster. Outside of those two, those final spots are completely up for grabs.

Greg Ward is one of the better bets to make the roster. The former Houston Cougars quarterback has done well in a slot role for the Eagles, being an unspectacular but reliable option. Travis Fulgham’s short but spectacular flashes during last year’s season should be enough to earn him a spot as well.

Looking at the last two spots, there are three prime candidates. This camp is the proving ground for former 2nd round pick J.J. Arcega-Whiteside. The former Stanford receiver has been a massive disappointment for the Eagles, struggling to even see the field. John Hightower, a 5th round pick last year, showed promise as a route runner but struggled to catch anything. He is also 25. Quez Watkins is a younger speedster who showed promise as a deep threat. One of these three will miss the cut, and it will most likely come down to training camp and preseason.

The question all offseason has been: who is starting opposite to Darius Slay? With the offseason in the past, fans still do not have an answer. The Eagles didn’t bring in any veteran competition for the position (yet) and only really added 4th round selection Zech McPhearson. The position is as wide open as they come, leaving an opportunity to be won at training camp.

Early on, the front runner looks to be Michael Jacquet. Jacquet has been receiving most of the reps in OTA at CB2. An undrafted free agent out of Louisiana, Jacquet showed some promise in starts late in the season before having one of the worst games by a corner in recent memory against the Cowboys. Only playing the position for a few years now, the Eagles might be intrigued by Jacquet’s high athletic upside.

There are other candidates possible for the job. The aforementioned McPhearson with a good camp can make his case to start, and a free agent can still be brought in, though it is very late in the process. Fans have been wanting the cornerback question answered all offseason, and it looks like everyone’s going to have to wait just a bit longer to figure it all out.

Why Jared Goff could be the long term answer at QB
3 Buffalo Bills with the most to prove in 2021
wpDiscuz
0
0
Would love your thoughts, please comment.x
()
x
| Reply