Three quarterbacks who could be surprise Week 1 starters 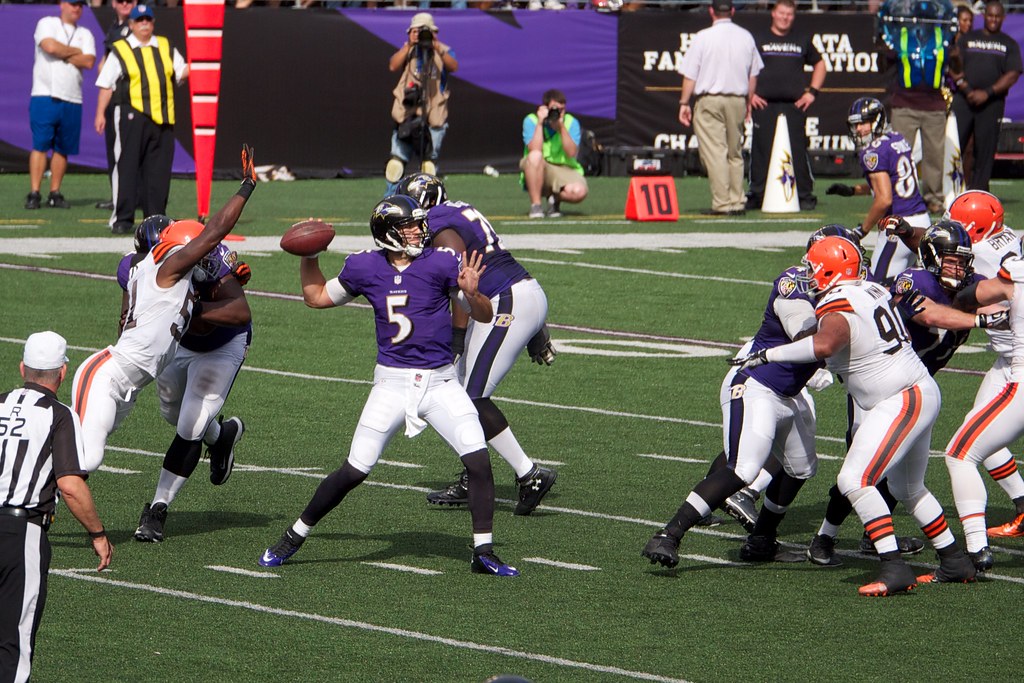 The quarterback situation for the Washington Football team is not as open-and-shut as many believe it is. According to ESPN staff writer John Keim, Washington will still have a quarterback competition after signing Ryan Fitzpatrick to a one-year $10 million deal. The competition will be between Fitzpatrick, Kyle Allen, Taylor Heinicke, and Steven Montez.

After Fitzpatrick, the favorite to land the starting job is Taylor Heinicke. The former Old Dominion quarterback was back at school prepping for finals when Washington signed him to their practice squad. He was eventually promoted to the active roster and saw game action Week 16 against the Carolina Panthers. He completed 12 of his 19 passes for 137 yards and a touchdown in relief of Dwayne Haskins. Then when Alex Smith was ruled out for their playoff game against the Tampa Bay Buccaneers, Heinicke was named the team’s starting quarterback. During that game, he completed 26 of his 44 passing attempts for 306 yards and one passing touchdown. On top of that, he had six rushing attempts for 46 yards and a rushing touchdown. The most impressive part of that game was the fact that the Heinicke-led Washington team was within eight points of taking down the eventual Super Bowl champions in the first round.

After coming into the year as the team’s fourth quarterback last season he is the favorite to be the team’s backup behind Fitzpatrick. However, it wouldn’t be shocking if Heinicke was named the Week 1 starter. After his performance in the playoffs, the team has rallied around Heinicke. He also showed that he is capable of taking control of an NFL offense and will lay it all on the line for his team. If Heinicke outshines Fitzpatrick in training camp, he could be Washington’s starter Week 1 against the Los Angeles Chargers.

The first draft selection of the Nick Caserio/David Culley era was former Stanford quarterback Davis Mills. Houston took Mills with the 67th overall pick in the third round. The selection was not a popular one because many thought Houston would have been better off taking a potential starter for another position of need with this selection over a project quarterback. But by selecting Mills in the first round the Texans administration feels that he could be their long-term starter and could even be their starter at this point this year. The Texans’ current quarterback room is made up of Mills, Tyrod Taylor, and Jeff Driskel. The belief is that former Pro Bowl quarterback Deshaun Watson will not play for the Houston Texans this season or ever again after his trade demands and his off-the-field concerns.

In a deep 2021 quarterback class Mills was considered a candidate to be the sixth quarterback drafted and the first one selected out of the first round. He ended up being the eighth quarterback drafted behind now-former Florida quarterback Kyle Trask who was taken by the Tampa Bay Buccaneers 64th overall and former Texas A&M quarterback Kellen Mond who was taken by the Minnesota Vikings with the 66th overall pick. According to Chris Tomasson of the Pioneer Press, the Texans were prepared for select Mond with the 67th selection before Minnesota took him with the selection before.

Mills was a five-star recruit coming out of high school and the top quarterback coming out that year. However, Mills only had 11 career starts at Stanford. Mill redshirted his freshman year and only had two passing attempts his sophomore season. During his junior year, he completed 65.6% of his passes throwing for 1,960 yards, 11 touchdowns, and five interceptions in eight games. He took a slight leap forward during his senior year completing 66.2% of his passes throwing for 1,508 yards, seven touchdowns, and three interceptions. Mills also had three rushing touchdowns during his senior year.

It isn’t certain that Mills will become the Texans quarterback of the future. It is very possible that the team takes a quarterback in the first round next year and Mills becomes a high-end backup. However, after taking Mills with a high selection the Texans must give him starting reps at some point this season. He was taken as high as he was because of his upside. If Mills shows why he was such a highly regarded high school recruit and has flashes of the upside Houston saw in his tape during training camp, he could easily supplant Tyrod Taylor as the team’s starting quarterback next season as early as Week 1.

After the 2020-21 NFL season it was believed that the Philadelphia Eagles would have a quarterback competition between Carson Wentz and 2020 Second Round pick Jalen Hurts to determine the team’s starter for this upcoming season. But instead, Philadelphia decided to trade Wentz to the Indianapolis Colts for a package of draft picks. Even with Wentz off of the roster new head coach Nick Sirianni still wants to have a quarterback competition to determine the starter for this upcoming season. The veterans that Hurts will have to compete with for the starting job are recently signed former 49ers quarterback Nick Mullens and former Super Bowl MVP Joe Flacco.

It has felt like a long time since Joe Flacco was considered a borderline Pro Bowl quarterback for the Baltimore Ravens. Eight years has passed since Flacco won the Super Bowl MVP winning Super Bowl XLVII against the San Fransisco 49ers. Since that point Flacco had been very average and then was replaced by Lamar Jackson late in the 2018-19 season after a neck injury.

He was traded to the Denver Broncos the following season for a fourth-round pick. He went 2-6 in eight games for the Broncos completing 65.3% of his passes and throwing for 1,822 yards, six touchdowns, and five interceptions. After injuring his neck Brandon Allen and 2019 second-round pick Drew Lock started the rest of the Broncos games that season.

Flacco was then released by Denver the next offseason and picked up by the New York Jets to be the backup to Sam Darnold. When Darnold missed four games due to a shoulder injury, Flacco played decently well as the starter. He completed 55.2% of his passes and throwing for 864 yards, six touchdowns, and three interceptions during that time.

After how Hurts played during his four starts last season it would be shocking if he was not the teams starting quarterback in year one. But if he has a rough camp and doesn’t show improvement in a new system with a healthy offense around him, Nick Sirianni may feel that the 13-year veteran may give them a better chance to win early on. It is important to note that Nick Sirianni has done a lot of more work with veteran pocket passers versus younger mobile quarterbacks like Hurts.

More backup QBs who can become starters later in the year

One of the biggest surprises of the 2021 NFL Draft was the Minnesota Vikings selecting Kellen Mond with the 66th selection in the third round. According to Mike Florio of ProFootball Talk, the Vikings were prepared to move up to the eighth overall selection to take Ohio State quarterback Justin Fields to eventually replace Kirk Cousins as the team’s starting quarterback. That didn’t work out and Fields ended up with division rival Chicago Bears. So their plan B was the take Texas A&M quarterback Kellen Mond in the third round to potentially fill that void. Similar to Fields, Mond is a mobile quarterback that may be rawer than Fields but has the upside to become an NFL starting quarterback.

In 2016 the Dallas Cowboys did not land Memphis quarterback Paxton Lynch in the first round and settled for Mississippi State quarterback Dak Prescott in the fourth round. It is fair to say that their plan B worked out for them extremely well. That is what Minnesota could hope for in Mond. If the Minnesota Vikings struggle early in the 2021-22 season, they could turn to Mond and see if he could potentially be the team’s long-term future at quarterback.

After the Pittsburgh Steelers crushing playoff loss to the Cleveland Browns the biggest question surrounding the team was how would the team be constructed and whether Ben Roethlisberger would return for another season. Roethlisberger decided to return for his 17th season after taking a pay cut. He is expected to be the team’s starter in Week 1, but at this point of his career, Roethlisberger may not be capable of competing at a high level for a 17 game regular season and potential postseason play. Pittsburgh may have to evaluate their options in the house and make the tough decision of replacing Roethlisberger midseason with one of the younger quarterbacks on their roster.

Their quarterback situation this season may be similar to what the Super Bowl 50 Champion Denver Broncos’ was during the 2015-16 season. 2021 Pro Football Hall of Famer Peyton Manning only played in ten games during his finals season in Denver and was relieved by Brock Osweiler midway towards the season. But Manning returned as the team’s starter right before the playoffs and had enough in the tank to win the Super Bowl. That should be the blueprint for the Pittsburgh hopes to achieve this season with their aging quarterback and the younger quarterbacks behind him on the depth chart.

The battle for the backup job in Pittsburgh is between Mason Rudolph and 2019 first round pick Dwayne Haskins. Both have underachieved throughout their careers, but feel that they could be the Steelers long term option at quarterback if Roethlisberger decides to retire after this season. In 2019 Rudolph went 5-3 as a starter, but only threw for 1,765 yards, 13 touchdowns, and nine interceptions. Last season Rudolph threw for 324 yards two touchdowns, and an interception in five games (only one start).

Haskins spent his first two seasons in the league in Washington and was thrown in as the starter about midway through the season when he clearly wasn’t ready yet. In his first season, he went 2-5 as a starter, threw for 1,365 yards, seven touchdowns, and seven interceptions. The following season new head coach Ron Rivera made it clear early on that Haskins would have to earn the starting job and showed signs of not believing in him long term. Due to the lack of depth in the quarterback room, Haskins was named the starter and started six games for Washington last season. He went 1-5 as a starter, threw for 1,439 yards, five touchdowns, and seven interceptions. After a photo leaked of Haskins breaking COVID-19 protocol and attending a party with strippers, he was stripped of captain and later released after a brutal start against Rivera’s former team the Carolina Panthers. This offseason he signed a futures contract with the Steelers.

An interesting transaction that occurred this offseason is that the Steelers did give Rudolph a one year extension after this season worth $5 million. That is a sign that they view him as the potential replacement for Roethlisberger long-term or is comfortable with him competing for the job with Haskins or a rookie next season. It would be hard to imagine one if not both of these quarterbacks getting a shot at being the teams starting quarterback for a couple games this season to preview what their quarterback situation could look like next season and beyond.