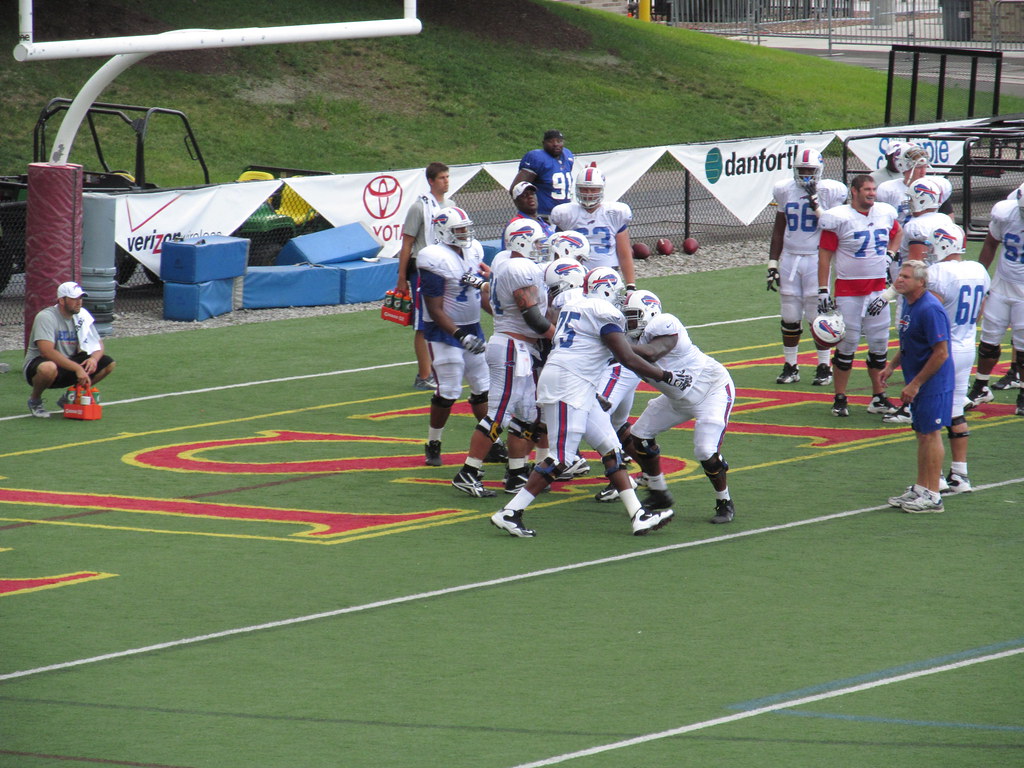 The Buffalo Bills begin their 2021 training camp in about a month and a half. For the second year in a row, the Bills will complete their camp at home in Buffalo as opposed to traveling to St. John Fisher College in Rochester. Due to Covid-19 and the potential protocols that will be in place through August the Bills management decided it was best to stay at home. Now that Buffalo knows where they will be practicing all of August there are still certain rumors that are floating around about the Bills roster. Post Free Agency and NFL Draft is a very interesting time for teams especially when there are quality free agents available just like there is this season. Buffalo heads into training camp with the best roster they have had in the entire 21st century. In all three facets of the game, Buffalo has elite talent. Not only is that talent elite but it is also young. A majority of the cornerstone players on the Bills roster have not even touched age 28 yet. With a really good and young roster, Buffalo hopes to make a jump to the Super Bowl season. However, before all of that even begins the Bills are still circulating in the news due to several rumors. Here are three major Bills rumors before training camp.

This is a rumor that has been attached to Buffalo for some time now. For a good portion of the early offseason, many people thought that the Buffalo Bills would trade a late-round draft pick to the Eagles in exchange for the former Pro-Bowl tight end. Ertz voiced his frustration with the franchise last season and both sides have been in a rift since. The only option for the Eagles seems to be to part ways with the disgruntled veteran. However, the Eagles have stood pat that they do not want to release Ertz but instead trade him. The Bills have been connected because they do have a weakness at the tight end position.

As this rumor has come and gone throughout the offseason it varies how much the Bills seem interested in trading for Ertz. While Ertz certainly would be worth a 5th round pick or later and easily become the best tight end in Buffalo there are reasons Beane could be hesitant. First, Ertz had a very rough injury-riddled 2020. Although just 30 years old this is something to certainly keep in mind. Ertz does not have an extensive injury history, but players are rarely traded for after injury-riddled seasons. Second, it is no secret that Ertz wants no part of Philadelphia. Brandon Beane could be in wait-and-see mode to see if the Eagles eventually give up and release Ertz. Lastly, Ertz does carry a large cap hit of 12.7 million in 2021 with a dead cap hit of 3.5 million in 2022 (UFA after 2021). Even though the Bills just cleared up some cap space by converting Stefon Diggs salary to a signing bonus, likely, Beane will not want to take on such a huge hit for an older tight end.

What makes this rumor, so intriguing is that Beane has commented on the state of the Bills tight end room several times this offseason. Beane has emphasized that Buffalo needs more from the tight end position. At the same time, Beane has circled back to that comment saying he does have faith in Dawson Knox and the rest of the tight end group to be able to step up. While Knox has always had potential and a high ceiling, he has not come close to that ceiling or being consistent. The addition of Ertz would certainly push Buffalo from a mediocre tight end group to potentially a top ten group. Ertz adds a different dynamic as a pass-catcher from both the hand in the dirt and the slot.

This rumor has no straight yes or no answer of will it happen or not. With all the previous rumors of both parties being tied to each other it likely is something, the Bills have explored at one point this offseason. I think it is fair to say that a trade is unlikely. However, I believe that Zach Ertz will be on the Bills roster at some point during the 2021 season.

Rumor: Buffalo will sign a veteran cornerback before camp

This is a rumor that has swirled of late because of the salary cap that Buffalo just opened up by converting Stefon Diggs’s base salary into a signing bonus. The Bills now have about $9 Million in cap space ready to use. The reason that cornerback has been the main position a part of the conversation is because it is one of the weak spots on the roster outside of star cornerback Tre’Davious White. Opposite of White Buffalo has a very young group led by Levi Wallace. Each of the past three seasons the Bills have brought in a veteran cornerback to compete for the number two spot across from White. That was at least the case until this offseason. Buffalo neglected to add a cornerback in free agency and early in the draft instead opting to rely on young unproven talent and Levi Wallace the starter the previous two seasons.

What puts the Bills in the market for a corner is not only the money they now have but also the fact that there are several starting-caliber veteran cornerbacks on the market. Buffalo has options with Richard Sherman, Steven Nelson, Brian Poole, and a couple of other veteran corners. While Buffalo may be confident in the young group, they have now there is some very good value this late in free agency. For example, Richard Sherman who happens to fit Buffalo’s defensive scheme very well has declared that he wants to play for a contender. Buffalo is one of the few contenders who will not only be able to sign Sherman but compensate him at a pretty solid rate. The same goes for Steven Nelson who has been a very good corner the past couple of years in the league.

This rumor is interesting because if you go off of Brandon Beane’s habits he will bring in one of these players. However, I think that Beane will wait as long as possible to add a player to determine what Buffalo has at the position already and the confidence in that group. I think that Beane would be comfortable with some corners coming off the market and is in no hurry to make a move. While I think Sherman and Nelson would both benefit Buffalo significantly Beane seems to have high expectations and praise for Dane Jackson who is currently competing with Levi Wallace. I do think that Beane is exploring this option but will opt to not sign a veteran cornerback to bring in for the 2021 season.

Rumor: The Bills are having trouble getting players vaccinated

While not specifically football related it has been a topic of conversation around Buffalo for a couple of weeks now. Brandon Beane found himself in hot water after he said he would cut an unvaccinated player if it meant Buffalo would then meet the threshold of enough vaccinated players for looser protocols. Beane’s comments caused quite the uproar from the NFLPA, and Buffalo has been under vaccine watch since. Combine Beane’s slightly insensitive comments with the fact that all the Bills players who have been in press conferences have declined to comment on their vaccination status. Add on the public disapproval of the COVID-19 vaccine from both Stefon Diggs and Cole Beasley and Buffalo could be on the wrong side of the news when it comes to the vaccine.

This bodes well for the Bills who have found themselves in hot water with the vaccine talk recently. It looks like Beane, and Sean McDermott has been able to right the ship for Buffalo. While Buffalo is likely not one of the 16 teams that have at least 50% of their players with one shot the discourse about vaccines over the past couple of weeks has turned from a negative conversation to a positive one. Buffalo likely has a way to go to meet the threshold of vaccinated players to have minimal protocols to follow. However, McDermott and Beane have turned the team in the right direction and seem to have all the so-called vaccine drama in the past.