Alvin Kamara facing suspension: running back targets for the Saints 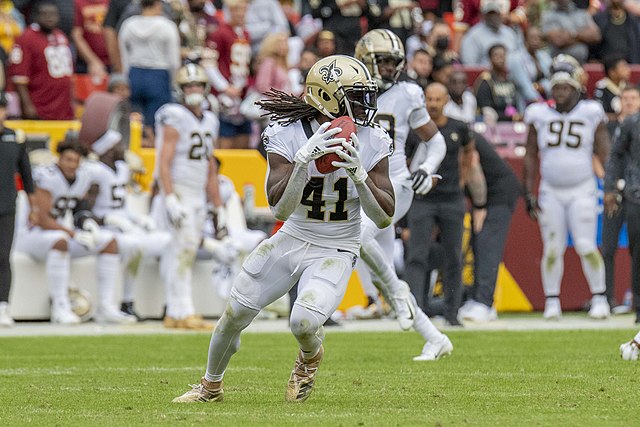 RB targets for the Saints after Alvin Kamara’s arrest

The highly touted New Orleans Saints running back Alvin Kamara was arrested after the 2022 NFL Pro Bowl for being accused of “battery” for seriously injuring a man at a club. It was proven by video at the club that Kamara did cause substantial harm against the individual as the Saints RB punched the non-aggressor eight times.

The outlook for Kamara in the NFL is far beyond murky. The Saints Pro Bowl RB could face jail time for the incident in Sin City. If Kamara doesn’t receive a jail sentence, he could likely face a suspension for his reckless decision. It seems logical that a six-game suspension is very possible for Kamara. It’s a grim situation for the Saints offense, as Sean Payton has already retired from his play calling duties.

Here is a look at how valuable Kamara has been for the Saints offense in his career thus far:

All in all, the chances of Kamara missing significant game time in 2022 are highly likely. With that said, the Saints need to be fully prepared to replace Kamara’s services in the short term with the utmost talent. Here are a few options that the Saints and General Manager Mickey Loomis could look at to fill the potential void at the starting RB position.

The Rams RB Sony Michel is preparing for a Super Bowl showdown very soon, but his future afterwards is mysterious. It would make sense if the Rams RB exits a team that has Cam Akers back and healthy. Michel could really look to collect a bigger paycheck and a larger role on a quality team. The Rams also need all of the money they can get as they aim to keep Odell Beckham Jr. and Von Miller on the team.

Michel would fit in well in a Black and Gold uniform. The former Pats RB is 26 years old and coming off a season where he ran angry for 845 yards and four touchdowns. Michel could be a fine complement to Mark Ingram in the Saints Brees-less offense. Michel could also be a nice value pickup, as he will likely be not one of the most sought out RBs in free agency. The Saints could ink Michel on a one or two year deal for $3-4 million per season.

The speed demon Jerick McKinnon came back from the dead for Andy Reid’s Chiefs offense in the 2022 playoffs. Between his battle with the Steelers and Bengals, the 29 year old RB accumulated 237 total yards. The Chiefs post-season is of course over, as Joe Burrow came back and edged out KC in overtime. McKinnon is now a free agent and it’s not clear where he could land next.

It would make sense if McKinnon, also known as “Jet”, returned to the Chiefs. He fits well in the Chiefs pass heavy offense and he may want to build on what he started in Reid’s offensive attack. If there was a quality team that needed McKinnon more and had a plan to give him the ball in space, it would be the screen heavy New Orleans Saints team. McKinnon is another veteran RB that the Saints could get on a cheap deal.

The Saints are all too familiar with New York Jets RB Tevin Coleman, as he yielded his will against the Saints as an Atlanta Falcon. Coleman averaged 4.2 YPC and mustered 356 yards behind a lackluster Jets OL in 2022. The 28 year old back has a few years left before his breaks fall off. Coleman is an all purpose back that can be an upgrade over Ty Montgomery. Coleman probably isn’t too eager to return to the Jets as a backup to Michael Carter.

Mickey Loomis isn’t scared to trade for a player that is the right fit. Jamaal Williams is a talented RB2 on a losing team (to say the least) and a fair deal between the two teams could take place. The Saints could could send a fourth round pick to the Lions for Williams, who is coming off a career season. Williams had a career high 601 rushing yards in 2022 and he could look to upgrade that stat with a potential starting role for the Saints. If Kamara only misses six games in 2022, they will still need a younger RB2 long-term as Mark Ingram is 32 years old. If Kamara is out of the Saints lockerroom for a long period, the Saints could definitely look at bringing in a franchise starting RB. There isn’t a profile in free agency that would help the Saints long term, so it would wise to target a younger, quality RB via a trade. The Saints also have familiarity with Detroit Lions head coach Dan Campbell, as Campbell was the Saints tight ends coach prior to accepting the Lions head coaching gig.

Fantasy: Four Sleeper QBs To Target In 2022
The rise of Zac Taylor