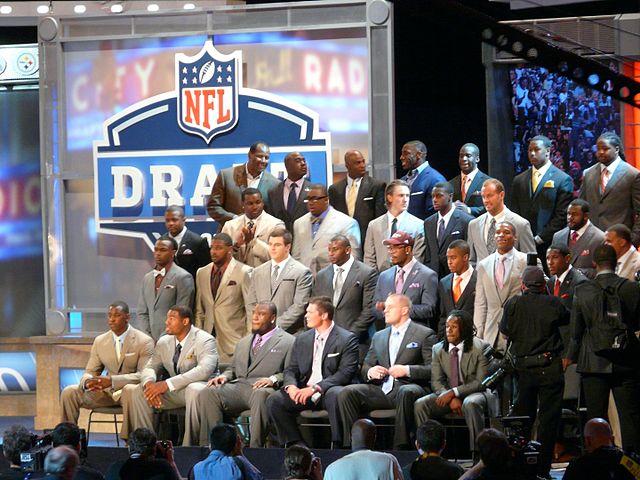 The 2022 NFL Draft is littered with big names and big talents that teams will be clamoring to select this coming April.

Weaknesses:
-Has the quickness you’d expect from a near 330 pounder
-Needs refinement as a pass-rusher
-Almost strictly a 1-technique

Overview:
Travis Jones is a relatively late riser in the draft process but the buzz surrounding him is well deserved. The defensive lineman out of UConn blew away observers during the Senior Bowl, showing off a unique blend of short-area quickness and natural power that overwhelmed nearly every offensive lineman that went up against him in one-on-one drills. This display of natural ability has him rising on most draft boards. However, the Senior Bowl was just a taste of what Jones has to offer. While at UConn, he was a big-bodied interior disrupter. A wall of a defender, he was virtually impossible to run against and his strength combined with a relentless motor helped him collapse plenty of pockets. While he still needs polish as a pass rusher and does not rely so much on his natural strength to win matchups, he has plenty to offer any team looking for a stout nose tackle. Had Jones played for a bigger football program, it is possible that he may be talked about as a potential first-rounder this year.

Strengths:
-Perfect frame for the pros
-Finds holes with good vision
-Has enough speed and explosion to break off long runs
-Solid as in pass protection
-Showed potential as a pass-catcher

Weaknesses:
-While he has good speed, he is no track star
-Not overly quick or shifty
-More of a downhill runner that takes an extra step to hit his extra gear
-Could never take over a feature role while at Florida

Overview:
In a league that values players that can fill multiple roles, Pierce is going to make one team very happy. The former Florida Gator has all the tools to carve out a prominent role on any team, whether that be a short-yardage/goal-line runner, a third-down back who is relied upon as a pass-catcher, or a blocker, or even a special teams player. That kind of versatile skill set would make him an ideal No.2 running back for any team looking for quality depth at that position. Pierce was never used extensively during his time at Florida and many see that as a sign of concern but the bright side is that he comes into the league with little wear and tear. He may not wow any team with his explosiveness or game-breaking ability, but he could quickly prove to be a perfect complimentary piece that can wear many hats on any team.

Strengths:
-Violent tackler
-Fiery competitor
-Superb athlete with sideline-to-sideline speed
-Has shown plenty of potential while in coverage
-Has been labeled as “the most versatile player in the draft”

Weaknesses:
-Has only spent two full years at linebacker
-Still learning the position that can delay his processing
-Easily taken out of a play if a blocker gets his hands on him

Overview:
When someone says that Troy Andersen has done it all as a football player, they mean it. Andersen has played quarterback, running back, and linebacker while with Montana State and has racked up accolades while playing all three positions. However, linebacker appears to be his permanent home in the NFL and it’s not hard to see why. A tremendous athlete who can chase down anyone, Andersen flies to the ball. The downside is that he is still relatively new as a linebacker and may take a year or two to develop as he learns the intricacies of the professional game. Still, his athletic profile could make many teams drool and his versatility could be enticing to any coach wanting to run a few trick plays.

Strengths:
-Terrific hands and doesn’t drop many passes
-Electrifying playmaker
-Can play both inside and out on the perimeter

Weaknesses:
-Very small frame
-May only ever be a Top 2 or 3 option on offense at best
-Competitive but can still be handled easily on the line

Overview:
Calvin Austin was seen as a diminutive track star who just played football but his 2021 dispelled that notion in a hurry. Displaying top-end speed with soft hands, Austin quickly established himself as an electrifying playmaking threat. Obviously his smaller size and stature will lower his ceiling in the league and his physical limitations may cap his potential and that will scare some teams off come April, but they shouldn’t. Austin plays much bigger than his size suggests and can quickly become an explosive second option for a team looking for a secondary dynamic threat. He played both in the slot and on the outside while in Memphis so he is not just limited to the inside. Austin’s stock may drop because he doesn’t have that prototypical size at receiver but what he lacks in size he easily makes up for in virtually everything else.

Weaknesses:
-Does not possess top-end speed
-Can get “grabby” with breaking receivers
-A willing yet sloppy tackler

Overview:
If a team is looking for a high intensity enforcer on the perimeter, they should look no further than Cam Taylor-Britt. The defensive back out of Nebraska is a firery leader who is never afraid to lay down a big hit on a ball carrier. Standing a hair above 6 feet and hovering around 200 pounds, Taylor-Britt has the size and attitude to handle bigger receivers. Though his lack of top end speed and his competitiveness will get him in trouble from time to time with speedy receivers, he has more than enough functional athleticism to keep up with most pass catchers. The most impressive aspect of his game, his tackling, certainly needs refined but that can be said about most corners in football. All of these traits could help Taylor-Britt see the field early and often in his young NFL career as whichever team that drafts him will certainly love the physical nature that he can bring to a secondary.

Overview:
Turner has quietly been one of college football’s most productive tight ends over the last few years. A favorite target of fellow 2022 draftee quarterback Carson Strong, Turner’s blend of size and athleticism made him a matchup nightmare for opposing defense. NFL teams should be drooling over him come draft time. His 6’6 frame makes him a big target and his athleticism combined with his willingness as a blocker means he can line up along the line as a traditional tight end or flexed out wide as an extra receiver. That level of versatility will make him a valuable asset for any NFL offense. While he doesn’t possess game-breaking speed, he has enough juice to rip off big yards after the catch while he is one of the better blocking tight ends in this draft. The depth at tight end in the draft might drop him down a bit as more polished prospects may go earlier but Turner has everything a team is looking for in a starting tight end. With a little bit of patience, Turner has the opportunity to shine within a year or two.

Strengths:
-Imposing size
-Nice combination of speed and strength
-Has a variety of pass-rush moves
-Played both on the edge and inside

Weaknesses:
-Not overly athletic or flexible
-Has trouble diagnosing plays and can be late to the ball-carrier
-Has had a few off-field issues

Overview:
When you build a pass-rusher, he most likely will look like Michael Clemons. Coming out of Texas A&M (the same school as Myles Garrett), Clemons has an interesting blend of size, speed, and power that allowed him to be used both on the edge and kicked inside as an interior pass rusher. His strength and ability to set the edge make him a stout run defender already and Clemons has a variety of pass-rush moves to help him wreak havoc in an opponent’s backfield. He does have trouble diagnosing plays and he does not possess elite lateral mobility meaning he can be late to a ball carrier but that can be adjusted with time and coaching. Clemons may not light the world on fire in his first few years in the league but he flashes plenty of potential that makes him an intriguing late-round prospect that could be a project that will pay off nicely for any team willing to put in the work.

Weaknesses:
-Does not possess elite strength
-Needs to add weight
-Can get pushed back by stronger pass-rushers

Overview:
If your team needs help at offensive tackle, then Max Mitchell is a name you should familiarize yourself with. An experienced starter, Mitchell has seen extensive action at both tackle spots. An elite athlete, Mitchell may very well be one of the best pass protectors in this entire draft. A great lateral mover, he would do well in a run-heavy, zone-blocking scheme. His lack of upper body strength is a bit concerning but that is something that can be added later. At 6’6, Mitchell has the frame to bulk up when asked but he would be an excellent developmental swing tackle and shouldn’t take him long to lock down a starting spot at one of the two tackle spots.