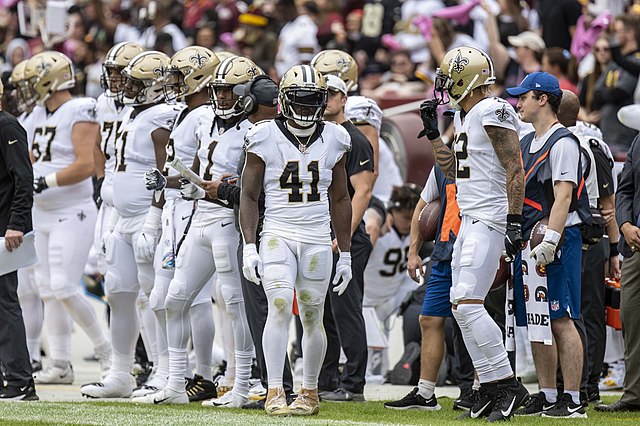 The New Orleans Saints had a rough 2021 season riddled with injuries, then Head Coach Sean Payton retired, and star RB Kamara got into a fight in Vegas and has charges pending.  Needless to say, it has been tough, but I look to new Coach Allen and the 2022 draft to turn things around a rebuild his image.  I for one am excited as NO resigned Winston for another two years, as he knows the system, the locker room, and the coach, and he was proving his worth at 5-2 when he got hurt.  The Saints and the Eagles had a monster pick trade to upgrade us to TWO 1st round picks. With that said, I’m going to outline a Saints mock draft in April! Let’s begin.

If anyone knows me and reads my articles, they know I love the Saints and Ole Miss, so I might be biased here, but he fits well!  At 6’1” and 205lbs, he is not the tallest, but neither was Brees.  The difference is Corral can run and run he does.  He calls plays at the line of scrimmage confidently and when he scrambles, his throws are not as accurate, but they still deliver. His lightning-fast release and pinpoint throws to receivers down the stretch extend the plays and allows wide outs to get yards after the catch.  He also is a leader on and off the field, and the Saints could use more of that in the coming rebuilding seasons.  I would like to see him sit one season and start next year, to bulk up some and adapt to NFL hits, pressure, and play style.  Corral finished his 2021 season with 3,343 passing yards, 614 rushing, and 31 touchdowns.  His arm strength alone makes him a first rounder, but what really makes him special is his mobility, mindset, perseverance, and leadership.  After the Eagles and the Saints trade, I still feel like they are moving up to draft a QB as there are numerous needy teams and not too many caliber QBs in this draft.  Having two 1st round picks means QB and WR, no doubt!

Why not give Michael Thomas a complement in the form of one Ohio State wideout to another?  Thomas was a former 2nd round pick out of Ohio State, and I project Garrett Wilson (Ohio State) going before his teammate, which leaves the door open for Olave to become a Saint!  At 6’0”, and 197lbs, he isn’t the biggest WR in the draft, but he makes up for that in speed, route-running versatility, and ability to burn defenders for yards after the catch.  He could be Winston’s shifty player while Thomas is the #1.  As Winston looked to Callaway last year in the back of the endzone, it would be Olave now open deep, with sticky hand and vertical leap to destroy the red zone.  I love this potential, and now with two 1st round picks, this all makes sense allowing the Saints to compete out of the gates under Coach Allen.  I do hope he bulks up some to be more physical in the NFL. **If he is already off the boards, this pick must be a WR.  We cannot pass up talent this early. **

Let’s address the elephant in the room…running back, and more importantly the legal troubles of our star Kamara.  The trial has been postponed till late April, but felony charges aren’t something to joke about.  That being said, Kamara is 26 and though I feel he still has a few years left, we need more than Ingram and Jones backing him up in case.  If we are lucky enough to snag top prospect Walker here, I am all for it!  He was second in the FBS last season with 1,636 rushing yards and was a powerful, consistent back.  Walker is a quick cut machine that makes defenders miss.  He reminds me so much of Kamara how he runs with purpose and pushes forward with attitude.  Walker is not the most decorated receiving back in the draft, but he is talented and that could be utilized learning with Kamara and becoming a two-headed monster behind our line of scrimmage.  If Kamara has to sit a few games, Ingram and Walker would fill in nicely as well.  This is definitely a wish-list type of pick.  The Saints might wait a round or two for RB, but they need to capitalize on youth now especially with the unknown of Kamara.

I would love for Coach Allen and the Saints front office to stay local and take a shot on this 6’6”, 299lbs tackle originally from Monroe, Louisiana. Starting as a sophomore after seeing some action as a freshman, he took 2701 collegiate snaps.  He is agile, quick off the line, and moves seamlessly both forwards, backward, and laterally.  One of his weaknesses is his bulk, he needs to add more muscle to be able to defend the pocket and not let it collapse, though he is great at reading defenders.  His senior year, he allowed only three sacks and total career, five.  That is a staggering low number, which just shows his consistency, dedication, and determination.  Watch some Ragin Cajun game tape, he is always present, rarely on his back, and a force to see on the line.   With the recent resigning to 1 year of OT Ethan Greenidge, the Saints still need OL depth and help with protecting the offensive playmakers, and Mitchell fills all of that.

With the free agency release of S Marcus Williams and recent signing of Daniel Sorenson, we still need young, eager safety depth.  This is where new Coach Allen gets to put him stamp on his defense.  Cook is 6’1”, 208lbs. and is strong, solid, and quick bursting into plays.  He is versatile and a real student of the game, which I think Coach Allen will love to mold further.  He watches the QB and tracks the ball all over the field.  His last season with the Bearcats, he recorded 96 tackles, two interceptions, and nine deflections, which earned him 1st year All-Acc selection.  Cook is a little too “upright” when making open field tackles and needs to be more centered and drive receivers down for zero yards after the catch.  He will be a great addition to our defense who can learn from Sorenson and fill in as needed moving into a starting role next season.

Despite, Coach Allen reporting that Hill will “shift back into the TE position” he is 31 and has never really played an entire season as a tight end.  He takes multiple hits and runs with such force, that eventually his body will break down.  We saw it last season, as he battled injuries.  So, are you telling me he is now our starting TE?  Wrong, the Saints need young talent that can be further developed.  That is where Wolfpack Senior Turner comes into play.  This kid is big at 6’6” and 246lbs.  Athletic and flexible for his larger frame, he contests the ball in the air and comes down with it bulldozing his way into the endzone.  He started his collegiate career as a WR before moving into tight end, so transitioning him into the WR3/TE role would be a perfect fit for the Saints.  Turner is a later round sleeper pick who is rough around the edges, but has great potential.  Coach Allen’s specialty is defense, so he can help better his run blocking and bulk up in his lower body to become even better off the line.  Turner has the ability to become a starting in the NFL given the right fit, and with Trautman as his only young competition on the team, I like his outlook!

These might be far-fetched picks for some, but for the first time in a long time, the Saints need to focus on rebuilding the offense! Last year I went 2/4 in picks. I am shooting for more this year so stay tuned and good luck to all your favorite teams in the draft. Only 29 more days, but hey who’s counting. WHO DAT!!!! Follow me at @luvtractor3 all season long.