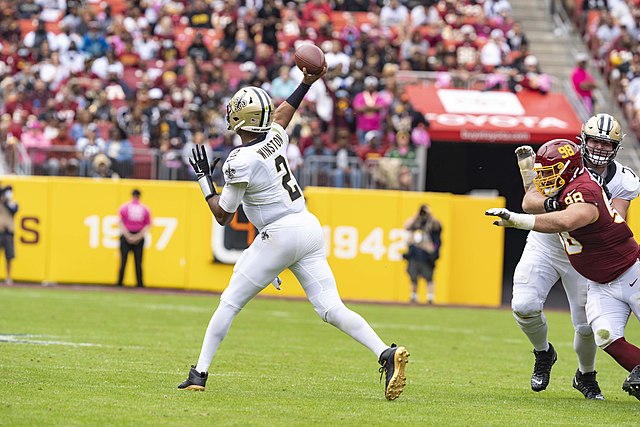 Will the Saints draft Jameson Williams?

The New Orleans Saints have famously acquired two first-round draft picks for the 2022 NFL draft. There have been lots of different expectations about how the Saints could use their draft firepower. For example, Bucky Brooks (NFL.com expert) suggested the Saints may take Malik Willis in the 2022 NFL Draft. It also seems logical for the Saints to target a tackle to replace Terron Armstead.

I believe the Saints will not draft a QB and they will use the extra picks to build around Winston and aim to win in their Super Bowl window right now. It may seem like a sexy idea in mock drafts to pencil a QB in for the Saints, but I don’t believe the Saints are eyeing a QB to cough up their ammunition to trade up and grab. There also isn’t an overly impressive QB prospect in this draft class in my opinion. It also appears that the Saints still have a lot of confidence in Jameis Winston and Drew Brees has even expressed his potential and chemistry with New Orleans.

With that enunciated, I believe the Saints will use one of their first-round picks to aspire to pick “the ahead of schedule” Jameson Williams. The Alabama WR can really maximize the arm strength of Winston deep down the field with his estimated 4.2-4.3 speed. I believe Williams can certainly be an upgrade from Harris and bring a unique skillet across the crisp Michael Thomas. Deonte Harris hauled in a 55-yard touchdown against the Packers and also a 72 yard touchdown against the Washington Football Team with Winston. The outlook for Williams (and Harris) would be very explosive.

The Raiders were favored to draft Ceedee Lamb in the 2020 NFL draft, but they opted to take the deep threat Henry Ruggs. I believe the Saints, who are projected to pick Chris Olave by many sources, could surprise the league and pick the fastest WR in the draft (Williams). He can really help Winston be efficient by being dangerous with screens, quick passes, and taking the top off opposing defenses. Williams would not only help the Saints “win now”, but he can offer a different skillset than Cantguardmike and potentially help Winston have a terrific WR duo for many years to come.