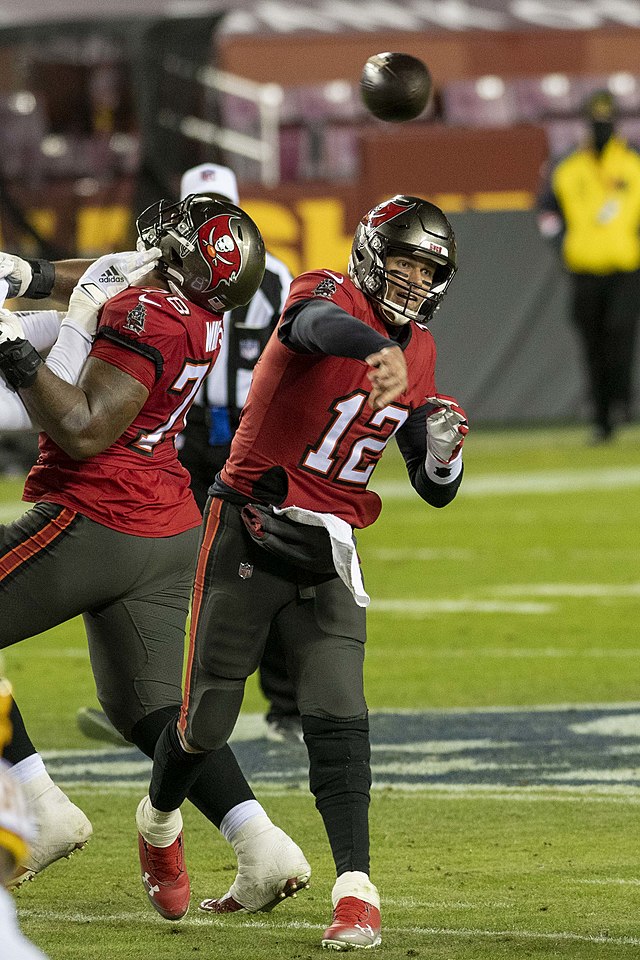 The NFC South was once considered one of the NFL’s toughest divisions. The Carolina Panthers and Atlanta Falcons made Super Bowl 50 and 51 respectively and the Saints were perennial Super Bowl contenders during the 2010s.

Tampa Bay was the one exception to the rule until they earned a playoff spot during the 2020 season and subsequently won the Super Bowl. By the time the team got good, everyone else declined. The Falcons have never recovered from the Super Bowl loss, Cam Newton decline every year until he was let go before coming back a shadow of the player he once was and Drew Brees retired.

Oh boy, how this ranking list would have looked when Brady was retired. This is arguably the worst division in the entire NFL for quarterbacks, with Brady head and shoulders above the rest.

Brady is the best quarterback of all time, so it comes as no surprise that he is number one in this list.

He is the Benjamin Button of quarterbacks and is aging like a fine wine. Despite being only four years into his 40’s, he has already surpassed his numbers from his entire 20’s, a period where he won three Super Bowls.

He is a freak of nature and there is no way he does not make it to number one on this list.

Sean Payton seemed to have him playing the best football of his career, which is a concern under new head coach Dennis Allen.

A defensive minded coach, Allen had a previous stint as head coach for the Oakland Raiders between 2012 and 2014 but had an 8-28 record. However, his quarterback room in 2013 consisted of Matt McGloin and Terrell Pryor. Their leading rusher had 733 yards and their leading receiver had 888 yards.

He will now go into a team that features Alvin Kamara, a good offensive line, Cameron Jordan, and Michael Thomas (if he gets back to his old self).

Winston has the potential to become a great quarterback for the Saints if he can stay fit. There is belief around the NFL that we will see him become the quarterback in New Orleans that we thought he would be when he was taken first overall by the Bucs in 2015.

Who was taken second overall in 2015? This was Mariota, who was selected by the Tennessee Titans.

Unless the Falcons wow us in the draft and take a quarterback in the first round, Mariota will start a season as the start for the first time since 2019, when he lost his job to Ryan Tannehill.

Mariota may not have been the player Tennessee expected when they took him so high, but his stats show that he wasn’t as bad as people have made him out to be.

He threw for 13,207 yards, 76 touchdowns and 44 interceptions during his time with the Titans before a two-year spell with the Las Vegas Raiders as the backup to Derek Carr, where he had a sporadic role.

With Cordarrelle Patterson’s rise in 2021, both he and Mariota can use their dual threat to help Atlanta win games. This will be tough, in what is a depleted roster.

The Falcons are not going to win many games in 2022 and Mariota has every potential to struggle immensely for his new team. He has every chance of proving his worth in Atlanta but due to this uncertainty and who is below him in this list, Mariota has to be number three on this list.

There is a lot of uncertainty at the quarterback position for the Panthers. Nobody knows who will suit up in week one for Carolina this season.

Cam Newton could come back. There is a lot of noise about the Panthers taking a quarterback with the sixth overall pick in this year’s NFL Draft. The organisation are reportedly interviewing prospects such as Kenny Pickett and Malik Willis.

However, at the moment their starting quarterback is 2018 third overall pick Sam Darnold. He was taken by the Jets but was out of the door three seasons later.

With 8,097 yards, 45 touchdowns and 39 interceptions but a 13-25 record as a Jet, many people felt he struggled due to bad coaching and that a move to Carolina would help unleash his potential.

Whilst the coaching ability of Matt Rhule appears in question, Darnold threw for 9 touchdowns and 13 interceptions during his sole campaign so far as a Panther. He has not yet lived up to his draft status that he acquired during his time with USC, something that means he is fourth on this list.