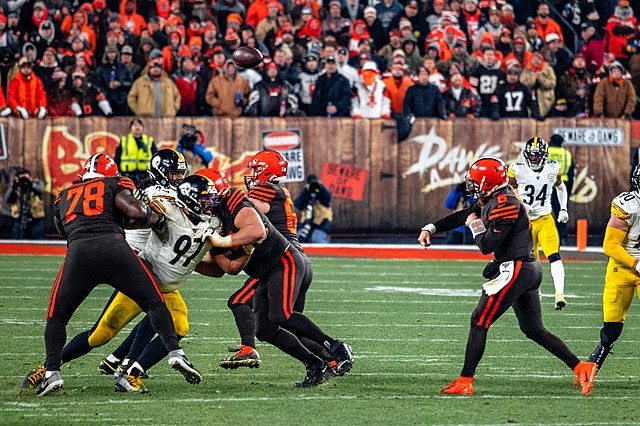 The Steelers are underrated at this point in time

The Pittsburgh Steelers have been widely underrated by many fanbases in terms of their upcoming season.  This even can be seen in betting odds, where the Steelers are ranked with the 10th worst odds to win the Super Bowl in 2022 (+6500), and their projected win total is 7.5 (tied for 11th worst pending the Browns updated odds with Deshaun Watson).  Many analysts have discredited the Steelers for 2022, and already see them as the middle of the road to the bottom tier.  While this could be the case, there is also a case to be made for why the Steelers could surpass odds and be a potential playoff team.  Here are 3 such reasons, and why they play into 2022 for Pittsburgh…

As much as the Steelers offense has been discounted over the last few months, primarily due to the QB situation, the defense is still as good as ever.  T.J. Watt was brought back on an absolutely enormous extension worth $112 million over the course of four seasons.  Minkah Fitzpatrick is still in town, alongside Terrell Edmunds who was re-signed this past week.

On top of that, they still have Cameron Heyward, Devin Bush, and Myles Jack to round out the defensive rotation, who are all decent to quality starters in the league.  Their CB1 Joe Haden is still a free agent as of the moment, however, if they re-sign him that would be a good start to re-building their cornerback room.  The corner is their biggest defensive weakness undoubtedly.

As of right now, the Steelers still have their first 4 rounds worth of picks, as well as an extra 7th from the New York Jets, and a new 6th from the Kansas City Chiefs.  In relation to the last topic, cornerback would be a potential option for their first-round pick at #20 overall, as players like Andrew Booth Jr, Trent McDuffie, and Kaiir Elam could be seen at this range, all of whom are quality at their position.  Their overall pick list is as follows:

While by no means is this a draft haul, it is a considerable number of picks and means they can fill out some of their primary positions of need. As of right now, their main needs would be OT, QB, and CB, dependent upon how they feel about Mitchell Trubisky, that could be narrowed down to just corner and tackle. It would also be worth looking into DT or LB as they could improve upon each of those for the long-term future without a doubt. Regardless, they have enough picks to where they could fill needs and bolster the team with some young talent from a relatively deep talent pool.

Despite popular belief, the Steelers did improve their offensive line this offseason and could continue to do so via the draft.  So far this offseason, the Steelers have made 2 additions to their IOL group and re-signed their starting tackle.  The two new interior OL members are guard James Daniels and center Mason Cole, both of whom have been quality starters the last few years and have their best years in front of them.  As of right now, Daniels is 24 years of age, and Cole is 26 years of age, so they are either in or entering their prime.

On top of that, they brought back their starting right tackle Chukwuma Okorafor, who has been decent for the Steelers and will be a decent enough tackle to last them a few years on the right side.  At only 24 years of age as well, his best years are still to come just like the aforementioned Daniels and Cole, so we could see Okorafor mold into an even better tackle with more time in the league.  Learning from Mike Tomlin, who has been one of the longer-tenured coaches in the NFL for a reason, will continue to be beneficial for him and his career. So, regardless of who the QB may be, they will be protected by a much-improved offensive line compared to 2021.