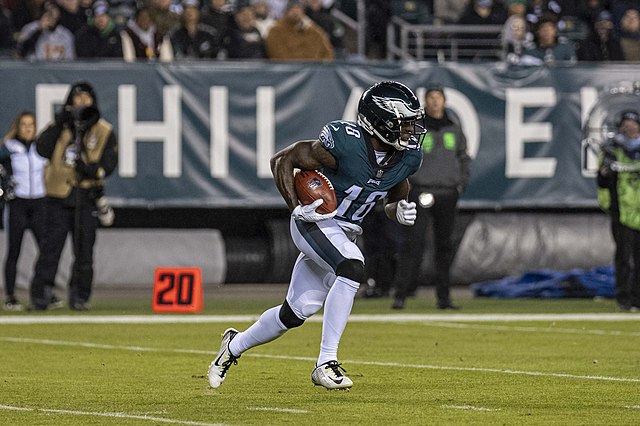 The Philadelphia Eagles may be seen as the second-best team in the NFC East by a large number of people. Although, they believe that they can take a jump with a young quarterback in a similar way that the Cincinnati Bengals did from 2020 to 2021 with Joe Burrow. With that said, I’m going to simply project the Eagles 2022 record and untwine how successful the Eagles could be next season.

Week 1: at the Lions

I expect the Lions to be scrappy, but I expect the Eagles to be a lot more explosive than the young Lions team in Week 1. I believe the Eagles will win 31-14.

Week 2: vs the Vikings

This NFC match-up is tight and I do believe the Eagles will have success against the Vikings pass defense. Although, I expect Justin Jefferson to still make his plays. The Eagles should win 28-21.

Week 3: at the Commanders

The Eagles will start 3-0 against a Carson Wentz-led team that won’t be able to hurt the stingy Eagles defense if Darius Slay has a quality game. The Eagles should win 24-10.

Week 4: vs the Jaguars

Doug Pedersen may pull a couple of all-nighters in this revenge week, but the Eagles won’t be upset by T-Lawrence. I expect the Eagles to win 35-21.

Week 5: at the Cardinals

The Eagles will have a tough match-up against the Cardinals, but I don’t believe the Deandre Hopkins-less offense will persist against Philly. The Eagles continue their winning streak with a 28-14 victory.

Week 6: vs the Cowboys

The NFC East quietly features two impressive NFC East teams at this point in the season. I actually believe the Eagles WR unit will have a lot of success in this contest, as the Eagles pick up a massive 28-21 statement victory.

Week 8: vs the Steelers

The Eagles will have a big moment of bliss (and a bye week) after the Boys contest, but I sadly believe T.J. Watt will lead the Steelers to have an upset victory against Philly. I also expect that the Steelers WR trio will give the Eagles pass coverage fits. The Steelers win a gutsy 24-17 victory.

Week 9: at the Texans

The Eagles should feel pretty confident in their defense against the Texans and Brandin Cooks. The Eagles pick up a huge 38-14 victory.

Week 10: vs the Commanders

Let’s be honest – the Wentz show will not bounce back against the Eagles in round two. The Eagles should win 21-7 in another impressive defensive effort.

The Eagles may have a taste of their own medicine, as Jonathan Taylor should run strong against Philly. I expect the underrated Colts team/AFC version of the Eagles duo to edge out the Eagles 28-21.

The Packers will bring another loss to the Eagles calendar – as A-Rod should find a way to pull through with a more-developed Christian Watson. I expect the Pack to win 28-21 in a close show-down.

A.J. Brown should feel pleased as the Eagles bounce back and beat a slowly decaying Titans squad. The Eagles win 35-17.

The Eagles will take care of business in a big 28-14 victory against the New York Giants that will slowly improve their pass protection and QB play.

The Eagles will have another “taking care of business” win against the young Justin Fields (who deserves more firepower). The Eagles win 28-14.

I expect the Boys to prepare better than their first match-up and they should put up a lot of points in their building at this time of the year for the second straight season. I believe Dallas splits games with Philly and wins 35-28.

I predicted the Saints to lose this game, as Philly honestly is the Saints kryptonite. The Eagles should win 28-14.

The Eagles will have an excellent victory against a complex Giants team and wrap up their extremely good season on a high note. The Eagles will win 35-14.

The Eagles have a favorable schedule and the Eagles have really improved their offensive firepower for Hurts while building a potential Top-3 front seven on defense. He could have unexpected growing pains at some points of the season. Yet, the Eagles are very well-rounded in the NFC Least and I feel that they will have four more wins than last season. Assuming they make the playoffs with at least an impressive record, the question is: how will they compete against juggernaut NFC teams like Tampa Bay or Los Angeles?