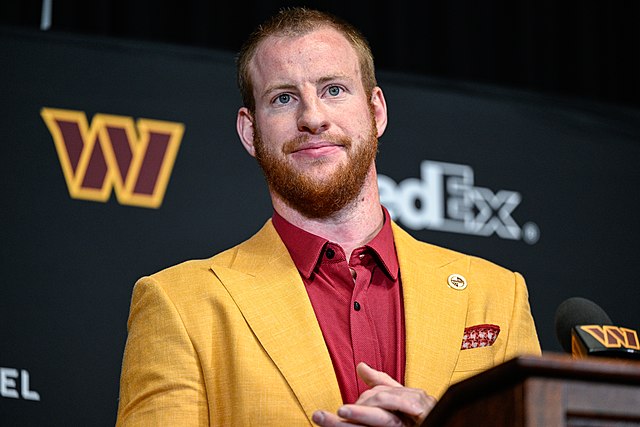 This offseason we have seen various quarterbacks moving around in the NFL landscape: Russell Wilson to the Denver Broncos, Deshaun Watson to the Cleveland Browns, Matt Ryan to the Indianapolis Colts, and the move we will talk about about today, Carson Wentz to the Washington Commanders. The 2016 #2 overall pick has had a very tempestuous career so far, going from a potential MVP candidate in 2017, to tying Drew Lock for most interceptions in 2020. Last season he brought the Colts to within 1 game for a playoff spot, and then lost to the Jaguars, throwing an interception and only 185 yards, scoring only 1 total touchdown on the game. With this, what should the Commanders’ plan be for 2023 onwards if Wentz does not produce in 2022, and what should they look into.

The first option for the Commanders would be looking at getting a 2023 quarterback. With two projected stars at the top of the draft in C.J. Stroud and Bryce Young, as well as some other potential options to look into, they could have a shot at one. Provided that Wentz does mediocre or poor in 2022, this would likely leave the Commanders in the top 20 or 15 again, similar to this past season. Trading up is a possibility, considering they have all their picks aside from either their 2023 2nd or 3rd (2nd will be the Colts’ if Wentz plays 70% or more snaps, 3rd will be Colts’ if he plays less than 70% of snaps.) If they are sold on Young or Stroud after their 2022 campaigns, I have no issue believing they would move up for one or the other. On top of that, you have some other notable QBs to watch for, such as:

Any of these options could be potential first round or second round talents based upon their 2022 play. Provided Stroud and Young both have another great season, the Commanders could just sit at whatever pick they may have and take one of the remaining options if they want to go that direction. Regardless, the draft is definitely a viable option for 2023.

Next up, we have the option of free agency, and potentially signing a quarterback if they choose to go this direction. There is a pretty good list of QBs going through the 2023 FA class, headlined by Baltimore Ravens star quarterback Lamar Jackson. The 2019 MVP has been one of the better players in the league for a few years now, and the Ravens have still not extended him as of yet, which could see him hit free agency if they end up not being able to agree on a contract. Other than Lamar, there is:

Are any of these options better than Wentz would be the real question. Based on age, you have DJ, Darnold, Minshew, Lock, and Mayfield who are all on the younger side of things, who provide at least some sort of potential if an offense can get a good scheme fit. Bridgewater and Jimmy G are both reliable short term options, who you are not necessarily going to win because of, but you can clear win with, as Jimmy brought the 49ers to the Superbowl less than 3 years ago, and with Bridgewater being solid in New Orleans and Denver. These options would essentially come down to which one the front office would want to take a shot on, or even pair with a 2023 rookie.

Finally, we come to the potential options currently on the Commanders roster, which is basically a 50/50 shot. The main two you would look to in the absence of Wentz would be Taylor Heinicke, who started last year and was mediocre at best, and 2022 draftee Sam Howell. Howell entering 2021 was seen as one of the better QB options in the class, however after a relatively unproductive 2021 campaign, he fell down the boards quite a bit. While this was not specifically his fault, as he lost a lot of playmakers to the 2021 NFL Draft class, it still scared off potential suiters enough to have him be another QB to fall into the 3rd, which all in this class did aside from Kenny Pickett. Howell did break 3000 passing yards in every season at UNC however, with 24+ touchdowns each year (38 in 2019 and 30 in 2020) while never having double digit interceptions. Howell could be the long term option, we just have to wait and see how he progresses as a QB for Washington.