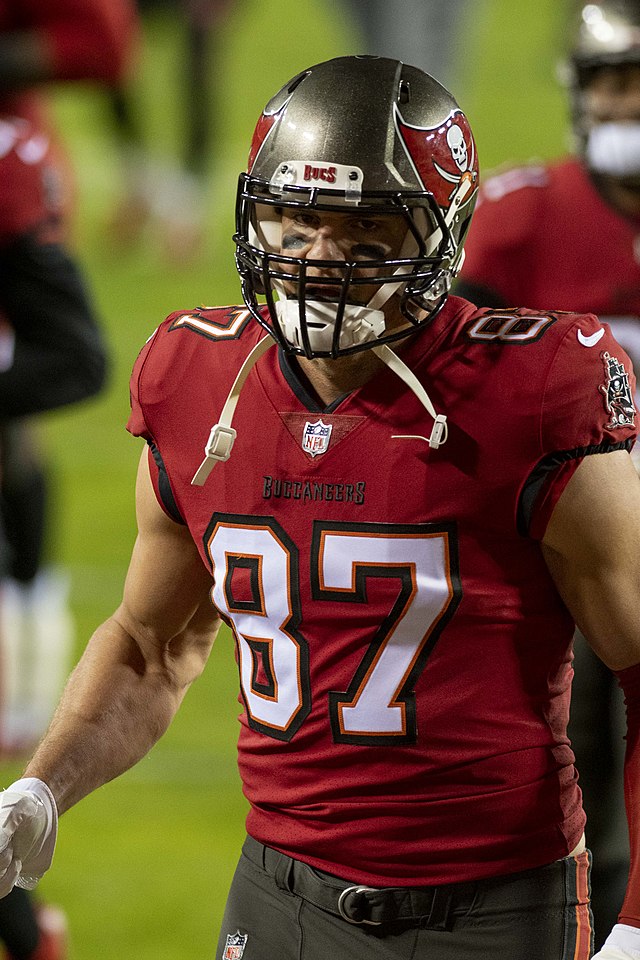 Is Gronkowski the best tight end ever?

The mythical football player Robert Gronkowski announced his retirement (for the second time) last Tuesday. Gronk is known for having high-end success with the Patriots, winning many Super Bowl rings with Tom Brady, and having an outlandish personality.

There’s a pivotal, fascinating question that should revolve around Gronk after he’s decided to hang up his cleats: Is Gronk simply the best TE of all time? Well, I’m going to outline the success that Gronk has left on the field while comparing his legacy to fellow legendary tight ends.

Gronk entered the league as a second-round draft pick with the New England Patriots in 2010. He really showed his energy on stage- as he celebrated with his family and put on his helmet. Gronk’s draft-day energy was a sign of things to come. Jimmy Graham was also a 2010 draftee, as the Saints picked him in the third round. Similar to many other gifted tight ends, he didn’t have an overly impressive rookie season (excluding TD receptions): 46 receptions, 546 yds, and 10 TDs. Nonetheless, he really blossomed in his second season.

In 2011, Gronk hauled in career-high numbers in many categories: touchdowns (17), receiving yards (1,327), and receptions (90). His efforts in his sophomore season resulted in his getting first-team All-Pro honors and his first trip to Hawaii.

Brady returned to play the drums for Gronk, so his long-time pal at TE would return to help him rule the galaxy. The former Pats TE that held a Hall of Fame resume prior to joining Tampa helped the Brady bunch win the Lombardi trophy in the 2020-2021 season — as he notably had two touchdowns in playoffs. Gronk had his last hoorah and won his fourth SB ring alongside Brady in a Buccaneers uniform.

Gronk’s Super Bowl count is very impressive amid the group of tight ends that are in Canton (or on the path to Canton). Tony Gonzalez, Antonio Gates, and Jason Witten combine for zero Super Bowl rings. Gronk even has more SB trophies than Sharpe, who even has an unearthly SB ring count (3).

I believe that Gonzalez and Gates should be proudly recognized for their success over a long period of time. Although, the resume of a player certainly can’t rely on the number of seasons played — especially if a player isn’t overly productive in the back-end of their career. For example, RB Frank Gore might have attempted to pace with Tom Brady for a very long career, but he also didn’t make a Pro Bowl in his last several seasons. Gates made eight Pro Bowls in his first nine seasons, but he didn’t make a Pro Bowl over his last several seasons. Furthermore, Gonzalez made four All-Pro teams in his first several seasons, but he garnered one All-Pro honor over his last five seasons. In legendary TE fashion – Sharpe also didn’t make a Pro Bowl over his five last seasons in the league.

With that enunciated, I’m going to simply untwine how Gronk’s 11-season career stacks up to the first 11 seasons of the career of Gates, Gonzalez, and Sharpe.

I would say that Gronk should feel quite confident about how productive he was in his career span in comparison to the same number of seasons as fellow cream-of-the-crop TEs. Gronk was flat out a red-zone machine, but he also was utterly successful: a whopping four SB rings.

Gonzalez matches the same All-Pro count as Gronk, but he didn’t find gold/a Super Bowl ring in his entire career. He was even able to garner an All-Pro season in the back-end of his career, but he still couldn’t win a SB ring with a loaded team. Sharpe (who did play in a different era) has a very similar resume as Gronk, but I believe Gronk’s magic in and out of Tampa is slightly more attractive than Sharpe’s output in and out of Denver.

All in all, I honestly believe that Gronk should be seen as the best TE of all time. His resume clearly expresses that he is a stat machine, consistent, and undoubtedly a champion. I believe that Sharpe is the second-best TE while Gonzalez is the third-greatest TE to lace up his cleats. Perhaps Travis Kelce (or George Kittle) will break the barrier established by Gronk in the future.

Let’s not forget that there is always a chance that the 33-year-old TE unretires for the second time in his career.